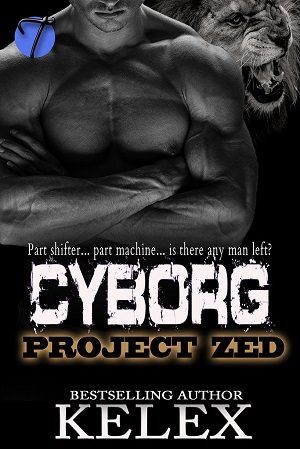 Blurb: Pfc. Ford Lennox is fairly certain he’s once again in the wrong place at the wrong time. He hadn’t been a true part of the terror that was Project Zed, but suffered because of it, just the same. Ford was forced to remain in Bear Mountain to hide their location, but once Zed attacks, he knows he’s no longer bound to stay. Too bad a chance meeting with a wolf shifter in a wheelchair has him lingering and questioning if he should leave.

Angry at the world, Hemming takes out his frustrations on those closest to him—and ignores the draw to Lennox… at first. When the human is attacked by another shifter, the protective instinct within the wolf goes into overdrive and he’ll do just about anything to keep Ford safe.

But he’s tasked with hacking into the cyborg Zed left behind during the last attack. Deacon wants the shifter within saved, but Hemming’s not so sure that’s possible. Can he get through the bits and bytes and find the man inside—especially when his focus is torn between the cyborg and the human he’s vowed to protect?

As the war comes to a close, everything is on the line.

Review: This book was intense. Deacon finally gets to question General Lore. Not to mention the hackers get to investigate how the cyborg works. I loved they were able to gather information through hacking Zed and General Lore’s files.

I read somewhere this was the final book in the series yet I find myself wondering what happened to Sal and Gianni, Capri’s brothers. There is no mention of that so I was disappointed. Not to mention who was D-3? There was no mention of tests being run on his body after his death. I would have liked to have known who he was and if he was related to anyone at the compound.

This was a great series to read and I could see it an on going series since there were so many rescued. Not to mention Deacon saying any new threats that pop up they would handle. I loved all the characters that have been throughout. Hemming, Ford and Orlando were exactly what each other needed. Ford was the glue that held the other two men together after all they had endured.