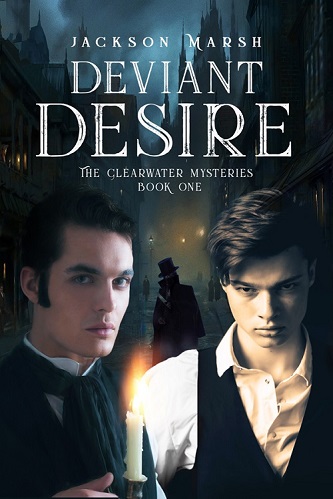 Blurb: The Victorian East End lives in fear of the Ripper and his mission to kill rent boys. Silas Hawkins, nineteen and forging a life on the streets could well be the next victim, but when he meets Archer, his life changes forever. Young, attractive and rich, Archer is The Viscount Clearwater, a philanthropist, adventurer and homosexual.

When Archer suspects the Ripper is killing to lure him to a confrontation, he risks his reputation and his life to stop the madman’s murders. Every man must play his part, including Silas.

Review: This is an interesting story that takes the Jack the Ripper story and gives it a twist, throw in an Aristocrat who is determined to help out the unfortunate young men from the poverty stricken East End of London and you get a very enjoyable read.

Archer has inherited the title of Viscount Clearwater and sets about being as different from his father as he possible can. He has decided to aid those men less fortunate than him and with the aid of his butler, Trip, and his head footman, Thomas, he sets about finding a person who can aid him in his quest… and he starts to dig into the gruesome murders of rent boys.

Silas is the young man who helps Archer, with the aid of his friend Andrej (also known as Fecker) as they describe the lives they have lived. Silas is also drawn to the handsome slightly older man, but with their positions in life it’s not something he can dwell on.

I enjoyed this story and was impressed with the descriptions of the dirty smelly East End. With short descriptions we are treated to the reality of the treatment of poor and the lives they live, which is a stark contrast to the cleaner more fragrant world of the rich aristocrats.

The story starts off slow, introducing each character, both main and secondary, in their settings, we get to know what they are like as they go about their day to day lives before they are drawn together sparking an adventure for all of them. I’m not gonna delve much into the story as I really don’t want to spoil things for readers, but I will tell you that as a mystery it’s wonderful, as a historical it’s settings are rich easily transporting you to the dank streets and the dour pubs, as a love story it’s a bit of a rollercoaster ride.

I found that I liked all the characters and that they were a perfect mix with a rich and broad dialogue. Each character has a unique personality; you become invested in their journey and follow along on the twists and turns.

I recommend this to those who love historical mysteries, interesting characters, wonderful story telling and ending that has you waiting in eager anticipation for the next book.