Hi guys! We have L.J. Hasbrouck stopping by today with her new release Evolution, we have a great excerpt and a brilliant $10 NineStar GC giveaway so check out the post and enter the giveaway! ❤️ ~Pixie~ 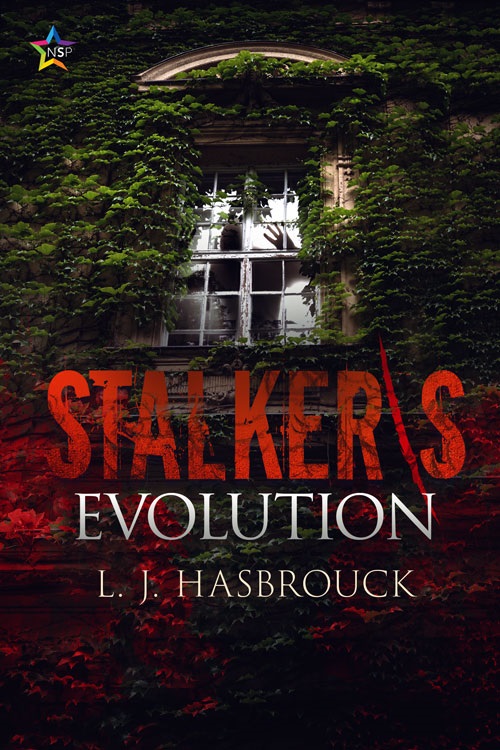 Brian Jameson left behind a world of chaos—vicious Stalkers, ruthless survivors, and an unforgiving landscape of bitter cold and snow—and escaped to an idyllic island paradise with the love of his life. But now he must abandon everything he fought for and return to the warped remnants of America, land of the lost and the home of the depraved.

His sizzling affair with hotheaded Cajun Louis Lavellé came to a boil when Louis’s secrets surfaced: among them, the fact that he left his sister in the clutches of a twisted, infected psychopath and let Brian think she was dead. Unable to bear Louis’s betrayal or the enigma of Eva’s fate, Brian flees the island—without Louis—and returns to New Orleans to begin his search for the missing girl.

If Brian can find his friends, gregarious D and her badass brother, Antoine, he thinks he might have a shot of fighting his way back to Eva’s last known location. But the Stalkers haven’t died out—in fact, they’re exhibiting frightening new patterns of behavior. And memories of Louis continue to torment Brian…along with the strong probability that Louis hasn’t forgotten him either.

Hopes and fears of reuniting with the Lavellé twins drive Brian as he navigates through familiar but shifting surroundings and obstacles. Sweltering heat has melted the snow, revealing once-buried horrors and allowing both Stalkers and other survivors to emerge from hiding. Everything Brian thought he knew about this warped world is shaken by mounting revelations, and each one chips away at his hopes for a happy ending.

But at this point, he doesn’t even know what his version of a happy ending could be.

Warning: scenes of horror and gore, suicidal ideation, references to past trauma and deceased family members, guns, and the deaths of prominent characters

There are no happy endings. Because when a book ends, the story’s not over. The characters continue to exist in their illusory world, kept alive by the readers long after the author has moved on. Our own existence lacks such perpetuity. We’re born, we live, we die. I’m still wondering when my end will come. All I know is this chapter has ended and a new one is beginning.

Brian closed the journal over his pencil and slid his palm across the warped image of Van Gogh’s The Starry Night. A real-life starry night twinkled outside the boat cabin. When he’d been behind the wheel and spotted the Louisiana shoreline, a surge of triumph had lit him with such heat he imagined himself glowing. But the realization there was no one to share the moment with had extinguished his flare of elation.

Flyers and photos stuck out from the pages of his journal. Brian slid them out, craving company in whatever form he could get. He swiped away a smiling man with a deer.

A pair of actors in ’20s garb facing off on a poster for Chicago.

A freckled girl bathed in light, young and beautiful.

A dark-skinned woman in a colorful robe and turban advertising psychic services while an orange tabby napped behind her.

His grandfather caught in a rare moment of laughter with his dog, Rocky, cradled in his lap.

A Polaroid of an Adonis crafted with the same perfection as the marble chiseled by the masters. And the same deceptive impenetrability.

Brian swept a thumb over the photo and sighed, regret swelling within his gurgling stomach. He shoved the photos and flyers back into the journal.

After tearing into a tasteless strip of dried fish and following it with water that retained a faint seaweed flavor, he abandoned the kitchen table and descended into the cabin. He crawled into bed and tugged the sheets to his nose. The scent of suntan lotion and burnt wood transported him to a less desolate night.

Brian curled onto his side and embraced the bare pillow beside him. What a hollow victory, returning to the place I tried to escape from.