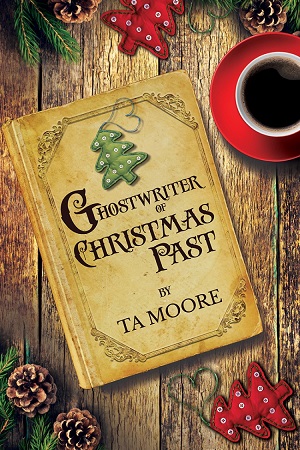 Title: Ghostwriter of Christmas Past

Blurb: Ever since ghostwriter Jason Burke ended up in loco parentis for his orphaned niece, Mallory, he’s been trying. He goes to parent/teacher events, and he makes packed lunches, so he definitely didn’t mean to forget about Christmas. He just hasn’t celebrated it since he left home under a cloud years ago.

Put on the spot, Jason makes the snap decision to take Mallory to see where he and her father spent their Christmases as kids. The last thing he expects is to run into Tommy, his ex—ex-best friend, ex-boyfriend—who is still living in town… and working as a sheriff’s deputy.

It’s hard to avoid someone in a small town—and maybe Jason doesn’t want to. He got Mallory a Christmas, and maybe now it’s time to get himself a Christmas boyfriend. But first, he owes Tommy some explanations.

Review: Jason left his home and went to California when he turned eighteen. His home life was not all that hot and with his dad’s mean streak he just couldn’t stay home. It meant he left the man he loved behind. Then eight months ago, his brother and sister in law were killed, and now he was raising their daughter. He just wanted something to go right. Deciding to go back to his home town was the only thing he could think of when he remembered he forgot Christmas. He wanted to give Mallory something nice. It had not turned out the way he thought.

Tommy comes to his ex’s rescue when he sees their car in the ditch. Then he ends up offering them a place to stay for Christmas. Even still a bit upset with the way things had ended, he decided it was time. Now if only they could see what was standing in front of them.

Old friends and lovers, brought back together in the future. A smart ass kid that I am not sure about. It is a short story that had a lot of detail and depth to it. I love the old town nestled in snow, especially around Christmas time. The kids sounded more like seventeen then ten. Her words and reaction just seemed off. Also the guys just seemed to make the same tone to their language. Then there was the fact that Jason never really gave Tom the answers he would have needed. It went from angst to love to fast for me, even if it is the holidays. For such a short story there were to many feelings floating around, and just didn’t make a Christmas story sound right. The ending was abrupt and even more off.

I am sorry to say but this story just didn’t flow right for me.