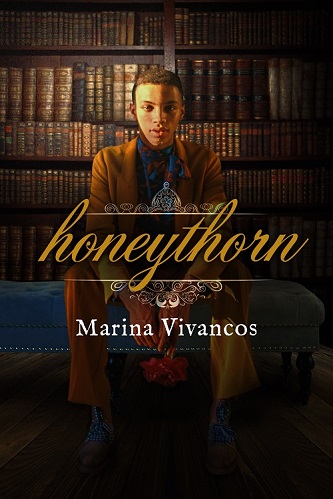 Blurb: Omega Milan Pryor knows his duty. He must travel North through the continent towards the snow, the cold, and his new betrothed. They say that Lord Alpha Raphael Ledford, the man he is to marry, is as artic as the weather of his land. But Milan has always been an optimist. Perhaps he might find friendship in the arranged marriage. Even love.

Review: Honeythorn is a totally and absolutely wonderful romance by Mariana Viviancos. I’ve never heard or read anything by the author before, however, I have a bit of weakness at times for Alpha/Omega type mating/male pregnancy books. So that was my starting point.

I’ll also quickly point out that this a great book if you are into other or all of the following: steampunk, regency romances and omegaverse stories (i.e. m-preg stories which does not involve shape shifters). Before I got into MM romances, the only MF romances I would read were historical romances, particularly Georgian and Victorian regency books and this was a massive flashback to many of those books. With a brooding Lord as an MC it also isn’t hard to think of some of the brooding heroes in books such as Jane Eyre, Pride and Prejudice or Wuthering Heights.

I find Honeythorn difficult to classify. It’s steampunk, and it does have a lot of the hallmarks of regency romance. But it is set in an alternate universe where there is one massive continent. There was no actual male pregnancy, but the world that has been created by Vivancos allows for the distinct possibility (does that mean there is more to look forward to?!).

The characters in this story are Lord Alpha Rafael Ledford and Omega Milan Pryor. Milan has been sent up north from the south of the massive continent to meet his new husband, Lord Ledford. Theirs is an arranged marriage, quite common in the world that has been created. It is a marriage that Milan has a lot of optimism for. His hopes, though, are dashed quickly and Milan and his mate’s rejection leads to immense pain. Pain that Milan feels he can not approach his husband about because Lord Ledford has made it quite clear that while he wants Milan comfortable (maybe), he isn’t about to try to make the relationship work. Ultimately, endangering Milan’s life as the bond is neglected.

Lord Rafael is a complex character. He has one disastrous mating, which has led him to close off his heart and emotions completely. Although he accept the arranged marriage/mating, he is not going out his way for his new husband. To Lord Rafael it is all a terrible convenience. However, this brooding alpha male has a lot to learn when it comes to omegas, marriages and love.