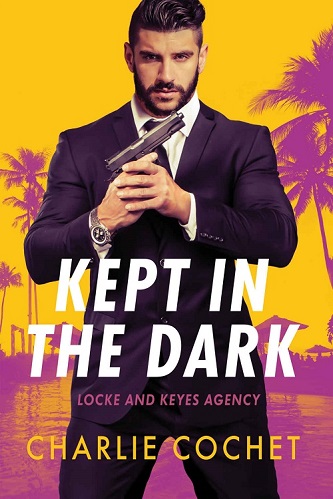 Title: Kept in the Dark

Now Caiden is riding a desk at Langley after his cover is blown. And Álvaro—who was “killed”—has a new identity and purpose as Delta/D, an operative for the Locke and Keyes Agency, under the leadership of the mysterious Alpha Orion.

When D and Caiden team up in a deadly black ops mission, the urge to kill each other will have to take a back seat to the desire for revenge against the man who betrayed them both. Surviving the mission won’t be easy. Resisting the passion between them—that might be impossible.

Review: Alvaro had once been a military man turned assassin, that is until he was betrayed and killed. Although in truth he was now known as Delta working for Locke and Keyes Agency. An agency that was ran by a man they never met. Two years ago he had risked everything and it came to bite him in the ass. Now the past was standing before him.

Caiden had always wanted to be a spook and had gotten what he wanted. Then one phone call ruined his life. He was set up and his cover was blown. Now a second chance to find out who destroyed his life, brought him right into the path of a man he had thought was dead.

These guys working together, well they would either kill each other or sleep together. The way they talk to each other, you can tell they would be burning the sheets up. I just loved the way the guys could joke back and forth, and the chemistry was definitely there. Although I do think parts of the story came a bit too fast, lets just say it was worth it.

This is one of those stories by an author that will always keep you entertained and laughing at parts of the story. The guys are just adorable and you will fall in love with them all. Even the alpha is a crack pot, which was a kick. Now there were parts of the story that were a bit to close to a tv show, but it still rocked. A leader never seen just heard, men who kill, danger and excitement, action packed and some definitely hot sex is just a bit of what you get in this story.

This is a great start to a new series and I can’t wait to get my hands on the next book. It was a great read that kept my attention through out the whole story. I had a blast reading this and would definitely recommend it.