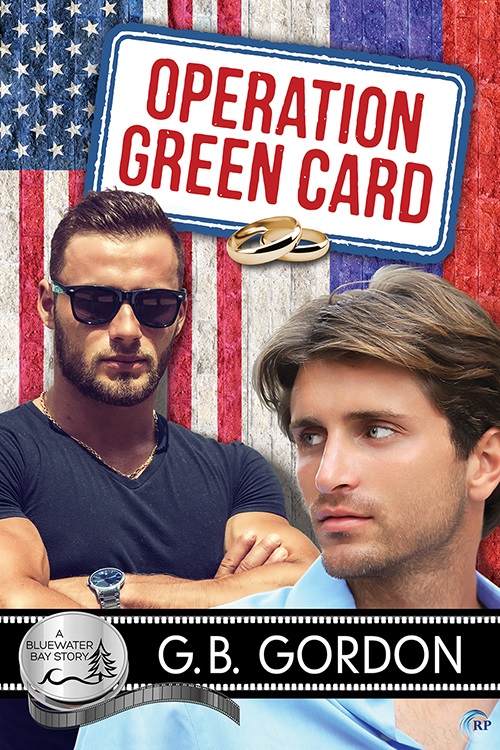 Arkady Izmaylov is a family man. He’s also gay. In Russia. His sister Natalya has been telling him to get out for years, but it’s only after an attack in the street that he finally concedes and says yes to her desperate plan of him marrying a stranger for a green card.

Jason Cooley was taught from birth that he’s no good to anyone. Then the military taught him he was good enough to save other lives, but that purpose got amputated along with his leg. He’s now working security at Wolf’s Landing and sending monthly checks to his ex for their daughter’s education. When Natalya asks him to marry her brother, Jason knows right away he’ll do it more for the mission than the money she’s offering. But when he actually meets Arkady, his mission turns complicated.

Jason quickly discovers he’s not as straight as he thought. He’s also the man of Arkady’s dreams. Arkady must convince Jason that he’s worth loving, and that Arkady won’t disappear from his life like everyone else. Because Arkady has always wanted a family of his own, and he’s not letting go of this one.

Ten things you didn’t know about Operation Green Card, because they didn’t make it into the novel

And this concludes the Operation Green Card blog tour.

Thank you to our hosts for letting us tour-stop in their space.

Thanks for dropping by everyone. Feel free to comment or ask questions.

(And don’t forget to leave your email addy for the raffle.) “C’mon, I tried,” Jason said to the It’s-so-fluffy unicorn belted in on the passenger seat beside him.

The unicorn was clearly not impressed. Jason didn’t blame it. He’d tried to leave work early, but he wasn’t sure if that stuff just never worked out as planned or if his subconscious was always planning against him. On the plus side, it had made the drive from Bluewater Bay to Seattle a breeze, because he was hours behind the rush-hour traffic. But it also meant it was past ten by the time he reached Highland Park, and when he pulled up to the curb, the little rental under the big trees was predictably dark.

He turned to the unicorn. “Looks like you’ll be spending the night on the porch, buddy.”

The unicorn was glaring at him and sticking its tongue out.

Jason sighed and looked back toward the house. He’d known Lily would be in bed before he made it. Of course he had. But he’d hoped he’d at least be able to have a peek at her as she slept.

With a sigh, he unbuckled his belt and the unicorn’s, then awkwardly climbed out of the car, dragging the big plushy and getting his dummy foot stuck inside the doorframe.

He turned and almost fell flat on his face, but caught one hand on the frame at the last second.

Kendra stood in the half-open front door, outlined against the hall light, a trash bag dangling against her leg.

Jason hooked one hand behind his knee and pulled the trapped foot free.

“Sorry it got so late. I wasn’t going to ring the bell, I swear.” He held out the unicorn. “I was just going to leave him on the porch.”

She didn’t look a day older than she had that fateful night six years ago, the week before he’d gotten himself deployed. Tall and athletic, though the weak light made her edges softer. She brushed a strand of hair behind her ear. “Do you want to come in? Let me just get rid of this.”

He waited until she’d crammed the bag into the trash can by the side of the house, then followed her inside. “Dan not home?’

“He’s on night shift this week. He left about an hour ago.” She led him into the kitchen, where he plopped the unicorn into a chair.

“Just clips, but the little girl reminded me of Lily. I thought she might enjoy it.”

“She’ll love it. She asks about you. Wants to know what your favorite ice cream is. Stuff like that. C’mon, Jay, just take her out for ice cream one of these days. At least come over when she’s awake. Too often, you come when she’s already in bed.”

He tried not to pull his head between his shoulders. Guilty as charged. But he wasn’t good for Lily. Better to leave things as they were. “I don’t want to confuse her.”

“Bull,” Kendra said without heat. “She understands very well Dan adopted her, and who you are. You know that.” She stuck her tongue out at him. “I showed her your yearbook picture.” Then she got serious again. “Kids aren’t that easily confused. And Lily’s smarter than most.” There was pride in her face when she smiled. “She had to have a pre-admission screening for kindergarten because her birthday was after the cut-off date, and they told us she’s gifted.”

“Wow.” On the surface, it was what every parent wanted to hear, but it also made him wary. It meant his little girl was different. And different meant difficult. It always did. “Does that mean a special school for her?”

Kendra shrugged. “They mentioned that as a possibility, but a grand a month? Who can afford that, right? But there are programs at school, and she might skip a grade later on.” She cocked her head at him. Reading some of his doubts in his face, maybe? “She’ll be fine, Jay. She’s an absolute joy. You really need to visit during the day.”

Too close. He was only good for people at a distance. He’d have no idea what to say to her, what to do, how to keep her happy. The only way he knew how to do that was by helping Kendra and Dan with whatever money he could spare. Kendra had balked at it at first. They didn’t need it, Dan had a good job, she’d said. But Jason had a pretty good idea what Dan earned at the steel mill. It might be a steady income, but it sure as hell wouldn’t be stellar. And he himself didn’t need much. Kendra had only relented when he’d suggested investing the money in a GET program for Lily’s college.

“Do you want to see her?” Kendra asked.

At the top of the stairs she put a finger to her lips, then eased open the door to Lily’s room and waved him in.

Lily lay sprawled sideways on her mattress, one fist tangled up in the cloud of dark curls spilling across the sheets, the other wrapped around a small and decidedly limp bunny, the blankets in a puddle on the floor. She had grown since he’d last seen her, her limbs longer now, less babyish. But she was still so tiny.

She made his throat tight and set off all kinds of weird shit in his chest. He’d known this would happen. She did that to him every damned time. He wasn’t sure why he did that to himself, why he kept coming back here. Except that he needed to. She tethered him. Even though he didn’t belong here, he belonged to her in a way. Without her, he’d be completely adrift.

He didn’t know how long he stood, just looking at his sleeping daughter, but when he turned back toward the door, Kendra had left.

He found her downstairs in the kitchen, where she’d poured herself some milk.

“Can I get you anything?” She pointed at the fridge. “Do you want a beer?”

Jason shook his head. “Driving. I should get home too. Early day tomorrow.” He paused, not sure how to get out what was sticking in his brain about the school she’d mentioned and how much it cost. It wasn’t his call. And he didn’t have the money either. He’d try to get it, of course, but better not talk about that unless he actually had something to talk about.

He was already in the hallway and looked back over his shoulder.

“Think about coming by when she’s up. You know you’re always welcome.”

He threw a last glance at the unicorn, then left. It was a long drive back to Bluewater Bay. Welcome to Bluewater Bay! This quiet little logging town on Washington state’s Olympic Peninsula has been stagnating for decades, on the verge of ghost town status. Until a television crew moves in to film Wolf’s Landing, a soon-to-be cult hit based on the wildly successful shifter novels penned by local author Hunter Easton.

Wolf’s Landing’s success spawns everything from merchandise to movie talks, and Bluewater Bay explodes into a mecca for fans and tourists alike. The locals still aren’t quite sure what to make of all this—the town is rejuvenated, but at what cost? And the Hollywood-based production crew is out of their element in this small, mossy seaside locale. Needless to say, sparks fly.

Check it out at Riptide Publishing! Bluewater Bay

To celebrate the release of Operation Green Card, one lucky winner will receive a $10 Riptide credit!

(Entries close at midnight, Eastern time, on December 16, 2017. Contest is NOT restricted to U.S. entries.)