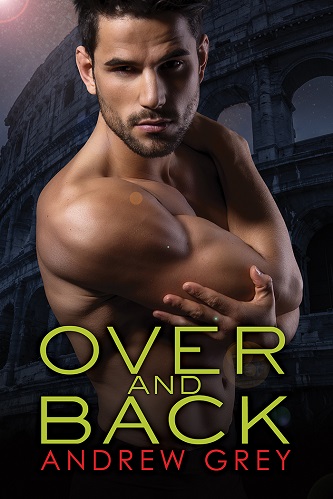 Title: Over and Back

Blurb: Opposites attract on an overseas holiday, but trouble has hitched a ride.

While Bronco’s nightclub is closed for renovations, the owners invite the staff on a trip to Italy.

Bartender Hank needs a roommate, and he’s had his eye on waiter Grant for a while, even if he’s had to keep his distance. But sharing such close proximity means sparks are sure to fly….

Grant has a problem saying no, and it’s led him into some less-than-healthy relationships. While he’s determined not to repeat his mistakes, it’s clear Hank is different.

They’re both willing to take it slow and explore the feelings building between them, but even in a foreign country, their pasts are catching up, and that could hurt more than just their budding romance.

Review: Over and Back is a charming return to the gritty world of Andrew Grey’s Bronco’s Boys series, which is based around the gay nightclub Bronco’s.

This is the fifth book in the series and one that I would highly recommend reading from the beginning to avoid any confusion, particularly when it comes to the characters of the previous books and the goings ons in their lives. It took me a while to remember details and found myself having quick peeks at the previous books so that I satisfied that I had the details right in my head. It’s been quite a while since I read the series (the last book was released in 2015) and I’m afraid although I enjoyed the audio (of book 4 only) more than six months ago, I have dim recollection of the story.

This story is about Bronco’s bartender, Hank, and server, Grant. Both of them have had problems in the love department and have both left some disastrous relationships in recent months. Hank was shattered when his ex-boyfriend left him, he has been fighting his inner demons to overcome a gambling addiction. However, his ex was not entirely sympathetic and a very jealous man, and so mentally Hank is struggling with allowing himself to move on with his life, which has to be the next step in his recovery. On the other hand, Grant’s ex was a Dom who didn’t abuse Grant per se, it was more that he refused to listen to Grant’s needs in and out of the bedroom, his main interest was controlling Grant. Grant struggling with these demons, because he knew that he was not a sub and not into the BDSM lifestyle.

Things come to a head when Bronco’s closes for renovations. A small group of couples (i.e. the four couples of the previous books) are to Italy for a much-needed holiday, which Hank had thought to surprise his ex with a holiday. But when his relationship goes south, his friends decide that Hank should give the spare ticket to someone else, and that person must be Grant. Mostly because the guys like Grant. Not only is he a good worker, he is a generally likable guy who would fit into their group nicely.

This is a mostly fun book, interspersed with a bit of adventure and intrigue. Its light hearted for the most part and was just a lot of fun to read. I just came down from reading two emotionally involved books before this one and Over and Back was the perfect book to help me overcome the leftover emotions. This was a great addition to the world of Bronco’s and now I want to go back and read the previous novels again properly!