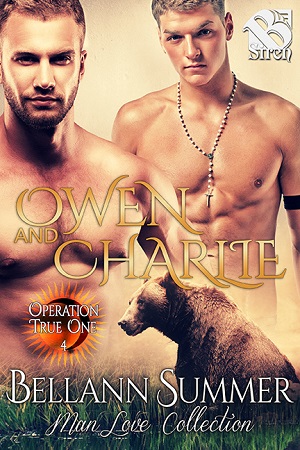 Blurb: According to the scroll in his grandfather’s attic, Charlie Johnston’s birthmark will lead to finding his true one. When a madman takes his virginity and birthmark, Charlie is broken.

Owen Kodiak knew mating and having children would strengthen the family. When he lost his son to deceit and betrayal, day-to-day survival became his only goal. Meeting Charlie triggers needs he had set aside long ago. Owen’s decision to fight the mating bond waivers when Charlie is kidnapped. After Charlie’s rescue, Owen may sit at the wounded man’s bedside, but total commitment remains out of reach.

Hurt slams against the thick wall surrounding Owen’s heart. When Charlie runs, Owen follows. Settling things between them and falling in love doesn’t keep the past where it belongs. There’s a book to find and Charlie’s cousins are up for the adventure. But, do the answers to a woman’s evil lies only lead to more questions?

Review: Charlie and his friends had been hunted because they had a birthmark signaling thy were true mates to the bear shifters and could have their cubs. Too bad his had been cut off him and his virginity was stolen by a cruel shifter. He didn’t think that he could have his bear shifter mate and no babies.

Owen had been avoiding Charlie ever since he found out that they were mates. He had mated once before and she had killed their child before he had even been born. A second chance at love and a family was something he wanted, if his fears wouldn’t betray them both. Then Charlie is abducted and he knows what he needs to do.

Fascinating story as always. It was worth waiting for and I was glad I grabbed it up. This story caught my attention from the moment I started reading and kept it all the way to the end. The characters were fully developed and down right hot. I think that Charlie would be my favorite of the guys so far. He is a sweetie that is for sure.

I had a blast reading this and can’t wait to get my hands on the next story.

This is one book I would recommend.