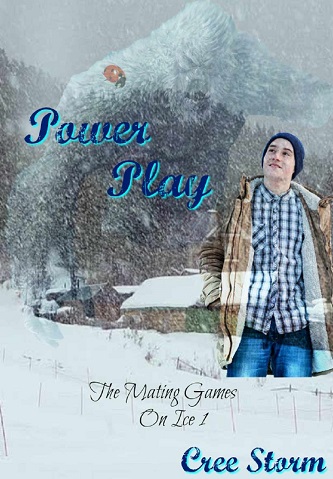 Series: The Mating Games On Ice 01

Blurb: Welcome to the Mating Games on Ice!

After discovering the nefarious actions of Councilman Troy, Ricky, Ian, and Joop, along with their mates and Councilman Eagan and his mate, are on a mission to stop Troy’s plans. To do that, they must attend The Winter Mating Games in Siberia.

Darby Sellers has always wanted to find his mate. Unfortunately, the summer games did not pan out for him. Overhearing the conversation about going to the winter games, Darby decides to hitch a ride, dragging his best friend, Jayden Donovan, along.

Councilman Camden Krill was just learning about the abominations Troy was creating to take over as ruler of their world. While waiting to meet with Eagan and his friends he receives a call from a man with the most musical voice Krill had ever heard. While making their way to the mating game grounds, Eagan’s men had been attacked, some were taken hostage, and the rest were dispersed into the Siberian lands.

Being the special shifter he was, Krill had little to fear. However, this night he feared a lot. He feared that those taken would be killed, or worse. He feared those left out in the freezing lands would perish. His biggest fear was that the little lady bug shifter with the lyrical voice would die before he ever got the chance to meet him in person and discover if fate had finally shined on him and brought him his true mate.

Review: Each book in The Mating Game On Ice collection features a different romantic couple. To enjoy the overall story arc and crossover characters, I would recommend reading the series in sequential order. This story is a branch off of The Mating Game series, so I would suggest reading those first.

There is nothing better than a good paranormal romance with two sexy men involved. I absolutely love how this author put together a story that draws you in but keeps your attention through out the whole story. This is one of those types of stories that you just can’t read once. It is exciting, adventure packed, danger filled and that is just a few fun points to this story. The guys are well rounded and fully engaging. I actually got a kick out of finding out what paranormal two of the guys were, bugs…

Darby has a gut feeling that he will find his mate, in Russia. He was going to go no matter what, but thankfully his best friend decided to go with him. The problem is the cold and bugs do not go together. So they hide in their paranormal form and hitch a ride on Ian. Might drive Ian nuts, trying to figure out the voices.

Then danger strikes, and they need to help the others. It leads him to his mate, a mate that just so happens to be a councilman. Krill is a very old shifter whose shifting side is unique. He knows just from a call who his mate is. Now all he has to do is to rescue him and the others. Going to be an interesting run.

When I started reading this, I felt behind because I had not known it was a branch off of another series. So I am going to go read those books once more, and you guessed it get a second reading of this book. It is that much fun. I can not wait to get my hands on the next book.