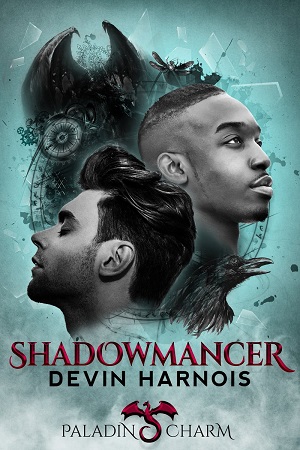 Blurb: Marius Everhart is something even mages fear — a shadowmancer. His power marks him as cursed, a creature belonging to the Queen of Shadows. Marius escaped her realm with his memories corrupted and his sanity in tatters, managing to live a fragile, lonely existence at the edges of society.

Some might call Ayodele Sauveterre delusional. He prefers the term “optimistic”. With his homeland in danger from invasion, Ayodele will do anything to protect it, even recruit a shadowmancer. Marius’s incredible power and gentle nature make him a perfect addition to Paladin Charm, a new mage guild dedicated to helping rather than exploiting the non-magical populace. The fact that handsome Marius also warms Ayodele’s bed is a wonderful bonus.

With support from Ayodele and his new friends in the guild, Marius begins to heal. He’s also quickly falling for the alluring mage, but Ayodele struggles with what’s forming between them. Past experience left Ayodele flippant but guarded, and Marius’s open honesty unnerves him.

As they grow closer, Paladin Charm prepares for a battle with impossible odds. And in the darkness, the Queen of Shadows waits to reclaim Marius and drag him back into a nightmare.

Review: I loved this story about a man named Marius who is a Shadowmancer that escapes the shadow realm and meets Ayodele a mage who is the guild master of Paladin Charm. Ayodele believes Marius is the perfect fit for his small guild and recruits him despite everyone being afraid of Marius’ power.

Serpant Fang is a guild Ayodele used to belong to until they decided to take Ayodele’s home land. This is where he draws a line and forms Paladin Charm in the hopes of defending his home and surrounding city-state against Serpant Fang. It doesn’t hurt that he’s attracted to Maruis and the sparks fly.

The only three things I wanted to know more about were Marius himself and how he came to be a Shadowmancer since he was given his power by the queen of shadows and is human, how exactly the guild came up a way to get to shadow realm and what happened to Serpant Fangs leader at the end of the battle.

Other than those three things it was an exciting story with great characters, adventure and danger all rolled into in one great story.