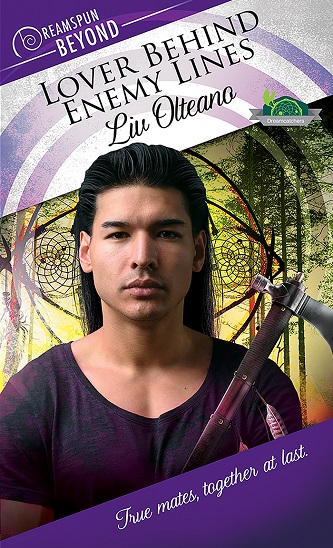 Blurb: True mates, together at last.

Claw—fearless leader of Seattle’s Team 32—has faced many dangers during more than a century and a half as a dreamcatcher. Yet nothing has ever scared him more than his obsession with Nathan Gallagher. Tormented by visions and dreams about the man ever since he first laid eyes on him, Claw now has to deal with living under the same roof with the object of his most ardent desires. And Nathan is so much more than a simple crush.

Brother of the caster who’s been plaguing Team 32’s area and less-than-willing houseguest of the team after a strange break-in attempt, Nathan may hold the key to finally apprehending his sister and putting a stop to the havoc she’s wreaking on Queen Anne…. Meanwhile, Nathan’s wreaking some havoc of his own on Claw’s heart.

Review: Lover Behind Enemy Lines is the third book in Liv Olteano’s Dreamcatchers series and is part of the house line Dreamspun Desires. My only experience in reading anything by the author is this series, but so far I like what I’ve read in terms of character development, romance, action and writing style.

The story focuses on the last single member of Seattle’s Team 32 of Dreamcatchers, who battle against the life draining spaga to keep the general populous safe. I highly recommend reading this series in order because there is an overarching storyline that is the entire basis for the backstory of the two MCs. Yet in saying that this book is definitely my favourite in the series, followed by book 1. I’m not sure if I just connected with the characters better, found their backstory a lot more intriguing or if it was just the result of two books of build up and I wanted to see the tough leader Claw get a HEA. Most likely it was a combination of all.

Aside from Claw, the other MC of this book is Nathan Gallagher. He pops up in book 2, where he is captured breaking into Team 32’s sanctuary and it was quickly realised that he is the brother to the team’s greatest enemy, a ley line witch with power to drain life from anyone, and she has been doing so at an alarming rate. Her evil needs to stop and the team need answers from Nathan.

However, Claw finds his feelings in turmoil, because something so primitive forms a connection between the two men. Claw is close to two hundred years old, he has seen a lot in his long life and he has loved in the past, as a very young man. Now Nathan is challenging his personal feelings while Nathan’s family are behind a situation that could kill many, including the team.

There is a lot of mistrust (understandably) but they work to form the trust so that the Team can stop the evil witch, which unfortunately for Nathan means that he finds out some horrifying truths about his family. Nathan has a really fascinating storyline, both his connection to Claw and his powers are really interesting and he is discovering a lot about himself while growing closer to Claw. The two have a wonderful chemistry, but there is enough mistrust and urgency in the current situation to be able to keep the instalove at bay.

This is a great end to the Dreamcatchers series and I really enjoyed every minute of it. If you’ve read previous books in the series, I don’t think you’d be disappointed, as per my opinion above. If you’re into the demon chasing, witch or spiritual side of paranormal romances this is good book (series) to get into. Blurb: A love worth crossing the stars for.

Taka has been a dreamcatcher and part of Team 32 for over six decades, but nobody has tempted him like Ginger—a dancer at club Zee. Too bad dreamcatchers aren’t allowed to have meaningful relationships with regular people. His willpower proves a finite resource, though, when a mission at the club means spending much more time around Ginger.

Ginger’s infatuation with Taka is unwavering. When he proves to have some paranormal skills of his own, he earns himself a place on the team—if he wants it. His decision will change his life—not to mention Taka’s—irrevocably.

But living in the now could prove an issue for a man who has as much history as Taka. Can Ginger’s determination help him make his way into Taka’s heart?

Review: After reading and enjoying book 1 in Liv Olteano’s Dreamcatchers series, I was quite looking forward to reading Taka’s story. This is now the second book by Olteano that I’ve read, and while I don’t find the flow of writing engaging for every moment of the book, I still rather enjoyed the story and found myself more than a little invested in the fate of the characters.

Star-Crossed Lover is the second book in Olteano’s Dreamcatchers series, based around the men of Team 32 finding their true loves in between keeping Seattle safe from a spate of demon (spaga) attacks. Spaga are demons that normally drain people’s life force when they sleep, however, things are getting out of hand. The team need to figure out who or what is causing the increase in attacks. What I like about this is that these men aren’t necessarily the usual alpha, strong type of shape-shifter, vampire, etc. They are rather ordinary men who have honed their powers and have been selected to form the teams they are with.

This book continues the mystery of the increasing attacks on humans by spaga, and so unless you’ve read the first book, the finer details of the overarching plot could be extremely confusing.

Star Crossed Lover is the story of Taka, one of the dreamcatchers on Team 32 and one of the longest serving member of the current team. While Taka is passionate about his work, he is world weary and so a dose of romance and a true love is exactly what strong, alpha male needs. Taka has no idea what is coming his way. At a club he encounters, Ginger, who works at the club and, like many romance heroes, he has a sad back story.

Ginger no longer answers to his real name and he has had to build himself up from nothing. At the club where he works Ginger lays eyes on Taka and is instantly taken. He knows Taka is for him, but between the spaga and Taka refusing to entertain the idea of any type of romance, Ginger has his work cut out for him.

If you enjoyed the first book, this is a bit of a change in pace. I do think that this one wasn’t quite as good as the first book. However, I’d say that that was because throughout the book as delve further into the spaga plot line, I found myself more interested in what happens to the characters of the next book which is out in December 2018. 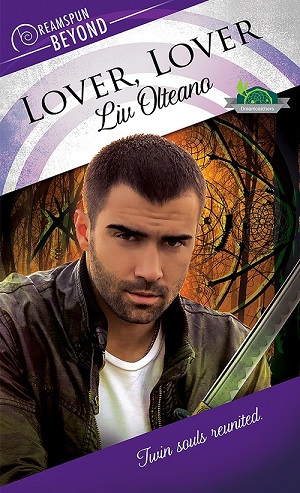 Drew’s always been a fighter: first in martial arts competitions, and now as a dreamcatcher—keeping the people of Seattle safe from spaga attacks that would drain their life force in their sleep. All he has to do to become a full member of Team 32 is complete his first mission.

But the first person he must defend is his ex, Angelo… the only man Drew ever loved, even if he was the one to leave. Drew never got over Angelo, and it seems Angelo might feel the same, despite the heartbreak he suffered at Drew’s hands.

As the chase after a powerful and resourceful caster hits close to home, old feelings resurface. But if Angelo learns of the dreamcatchers, he’ll be a target for the spaga. And how can he trust Drew now that Drew’s keeping bigger secrets than ever?

Review: I wasn’t sure what to expect with this one. I’ve never read anything by Liv Olteano, but I was more than happy to try a new author and hope that the novel would bring a change of pace to my current TBR pile. After a long line of reading various witch/wizard/mage stories I thought that I would enjoy this change of pace. It looked like a bit of action, in the sense of reading a crime fighting type story, mixed with romance. Judging from the blurb, this seemed like a rather different type of story than I’ve been reading recently.

Lover, Lover is the first book in Olteano’s Dreamcatchers series, based around the men of Team 32 finding their true loves in between keeping Seattle safe from a spate of demon (spaga) attacks. Spaga are demons that normally drain people’s life force when they sleep, however, things are getting out of hand. The team need to figure out who or what is causing the increase in attacks. What I like about this is that these men aren’t necessarily the usual alpha, strong type of shape-shifter, vampire, etc. They are rather ordinary men who have honed their powers and have been selected to form the teams they are with.

This story has the action I mentioned just now, yet is also at heart a very sweet romance where two men who had been together once find each other once more. Drew is an expert martial arts fighter, but he has dreamed of doing more and his path led him to being on Team 32. He has been trained and now their leader declares that it is time for Drew’s first assignment. He starts his job with enthusiasm and despite finding out he has to protect his ex, Angelo, Drew will do anything to make sure the man is safe. The reason they broke up comes down to simple stupidity and being brought together again, this time with Angelo knowing the full truth, shows that things weren’t as impossible as the two men had thought they were in the past.

This story is the start of an ongoing mystery – who the hell is letting so many spaga loose in Seattle. It’s a fun story. I think this will appeal not only to paranormal fans, but to those that enjoy romance series that follow military/police/crime fighting teams.