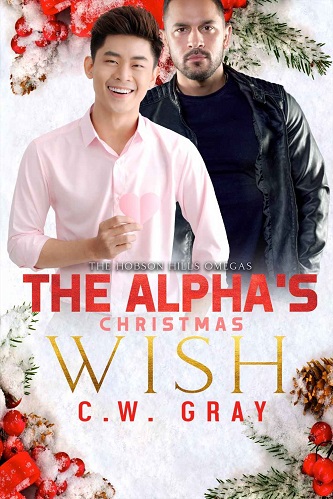 Blurb: Juan Vega lives in a town full of loving families and happy couples. As he watches his best friends fall in love, he can’t help but wish for his own omega. He’s been in love with Jackson since he met him, but it doesn’t look like there will ever be a future for them. When Bennett Wilson urges Juan to make a Christmas wish, everything changes.

Jackson Potts may be young, but he has plenty of experience with overbearing, abusive alphas. After watching the way his own biological alpha grandfather and father treated their omegas, Jackson swears he will never date an alpha. He knows there are good alphas out there, but he can’t bring himself to trust his own heart to any, even his own friend. The problem is, a certain alpha is very hard to resist.

With a little holiday luck, these two men may just find happiness.

Review: Juan and Jackson are best friends, but both of them want more. Jackson had not had a good experience with alphas so he was terrified of trusting one. However in his heart he wanted Juan. Juan has always loved Jackson but was afraid of going any further, then Jackson kissed him.

This is one of those stories where you have alphas and omegas, however they don’t change into an animal. I have never been a fan of paranormals that are only that way because the omega can get pregnant. However this author is different. She makes them funny as hell and the characters are ones that you will definitely fall in love. Now if I had a way I would definitely beat the tar out of Juan’s alpha father, what an ass. I would have liked to hear more about Jackson’s pregnancy though.

I love a good story that will have me in stitches. There is a serious tone to it but it is over powered by the funny parts. Who knew that llama’s belonged in the house.

I had a blast reading this and can’t wait to get my hands on the next story. This is one of those stories that will be read many times over. 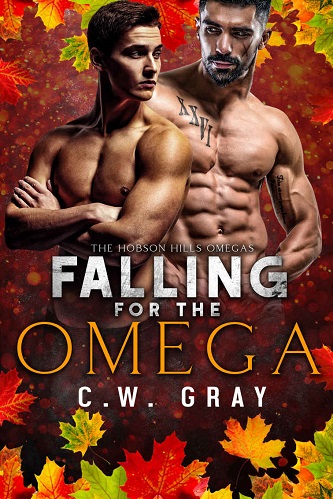 Title: Falling For the Omega

Blurb: Carter Benson is a lonely, scarred mess of an alpha. Honorably discharged from the army after being injured, he is left with very little that really matters. All he has is a Trust fund he refuses to touch, burns on his face, and a brand new prosthesis. He doesn’t have his family, he isn’t near his friends, and his face makes small children cry. So, he goes to Maine, finds a tiny town, and starts a business as a plumber. It doesn’t help his loneliness, though. Until a little girl hunts him down and forces him to be her new best friend.

Elijah Wilson has lived in Hobson Hills his whole life. So what that most of the townspeople think he’s a whore because he’s a single omega and got pregnant at eighteen? So what if they think he takes advantage of his grandparents by living on their property? Elijah and his large extended family know better. They know that he hasn’t dated anyone since before Olive was born. They know he works hard in the family business and is great with investments. They know the truth, but it can be hard living in a town that doesn’t care about the truth. It can also be really lonely. Until his daughter makes a new best friend.

When the two men meet, sparks fly. Their lives change for the better, but life isn’t always easy. Narrow-minded townspeople and greedy parents can cause a lot of trouble. But there’s always hope. There’s always love.

Elijah had came home from college pregnant and alone. He had his entire family to help him but he was really good with money. He had taken over his grandparents old house when they wanted to go smaller and his daughter was growing up. However most of the town folk were not happy with him. They called him names and treated him like crap but for the most part he just took it in stride. Then his daughter introduced him to their new neighbor and he was caught.

Carter’s family was never happy with him. He studied to be a plumber and joined the military. When an accident happened he lost friends as well as his leg. He had burns on one side of his face and down his arm, but he was doing better than most. When he moved to Maine he didn’t think anything would change. However when a little girl shows up, hands him a goody basket and claims that he is her best friend, well damn things were going to be looking up. Then he meets her father and he is sold.

Life is going to be good, until Elijah’s parents showed up and shit hit the fan. It will take the whole town to help keep them safe, but in reality it will just take his alpha. This is one of those alpha and omega stories where the omega can get pregnant. It is also one of those where even though they are alpha and omegas, they are completely human. Which is not normally one of my favorite types but this author manages to make it stand out. I love the action packed, a bit of danger, excitement, cute animals that is in this story. It has so much humor mixed in that I love.

I enjoyed it quite a bit and can’t wait to get started on the next book. It will be one of those that will be read more than once.

Carter is an ex soldier that was injured in battle. He keeps to himself as he’s self conscience about the scars he has. Elliott is an omega on his own with his daughter. He befriends Carter and the two hit off.

I like the way the story progressed at times but other times it felt too fast. Elliott’s family was a riot and caused many laughs. You have two men who are judged by others for being who they are and what they have been through. It shocked me how cruel some of the townspeople were in their gossip.

All in all it was heartfelt story with plenty of emotions and love. Good read.

I enjoyed reading this story and can’t wait to get my hands on the next one. I would definitely recommend it.