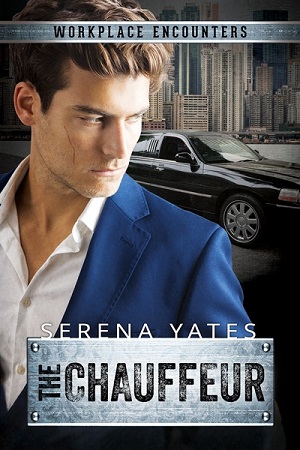 Blurb: Scarred former model Kyle Anderson leads a double life. By day, he works as a chauffeur for his uncle’s limousine rental company. Since his wages are too low for him to become financially independent, he works nights as an exotic dancer, donning a mask to hide his identity and the facial scars that got him rejected by his parents. Kyle catches the attention of Nick Giddings, a forklift driver who visits the club to let off steam. Nick is stuck in a low-skilled dead-end job after being kicked out of school for a prank he didn’t commit. The two men immediately connect, but when Nick is laid off and Kyle’s uncle pushes him to date a woman, everything comes crashing down.

Review: The Chauffeur is the second book in Serena Yates’ Workplace Encounters series. However, none of the books are related and are stand alone stories. This is the second edition of The Chauffeur, with Dreamspinner Press re-releasing the whole series. I read the first edition and could not tell the difference for the most part (my memory is a tad dodgy, though). Serena Yates herself has said that the difference between the first and second (this) edition is that she added a couple scenes, adding approximately 2500 words to the story.

The plot of The Chauffeur is enjoyable, so before I go into the story I’m just going to put this out there: the writing style is not going to be to everyone’s taste. Sometimes the wording was a bit clunky and some of the details that I wanted to know about Nick and Kyle was lost in the words. Also, the wording of the sex scenes is sometimes rather clinical – e.g. using “ejaculate” instead of “come” or “climax” or “release”. Another thing that I’ve realised since reading other books in the series that the general plot that is followed is very similar, but considering there are no characters to connect the books, this is not really an issue. Finally, I think that the blurb offers information much more clearly than it is presented in the book.

The book itself is about Kyle and Nick. It is told from both their POVs (in third person), something that I enjoy and sometimes prefer over one POV or first person of one character. Kyle was a model and very successful. That was until an accident left him scarred and revealed his family’s true colours – they ignore him after that. He now works as a chauffeur for his uncle’s limousine company. Desperate to supplement his income he becomes a stripper and this is where he meets Nick. Nick is a forklift driver (something that I found difficult to see by the wording used)… to be honest, though, I just got more information reading the blurb than I did the book. However, the main thing is that Nick is a low-skill worker and his job is in jeopardy. No matter the skill level it is a relatable position for most of us in the workforce.

If anything I would have liked a bit more background about both Kyle and Nick. I just felt like I was being teased about their background and what traumas/events are shaping their current lives. These guys have a lot of chemistry and a lot more potential.

Overall, this is enjoyable and a good way to pass some time. It’s the type of book you read if you’re in the mood for something that you don’t need to think about too much as you go along.