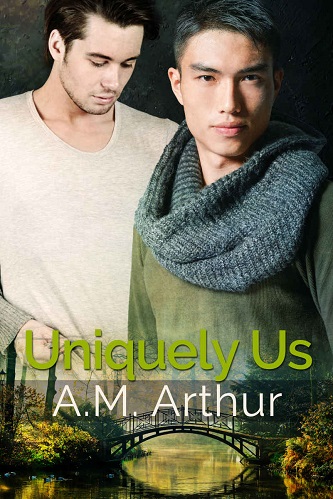 Blurb: Taro Ichikawa needs his weekly routines. Working from home as a programmer allows him to work around his constant struggle with anxiety and OCD—everything from exact meal times to his weekly dinner dates with his best friend Cris Sable. Openly demisexual, he’s comfortable knowing he’s different from most, and he’s content being single—until he breaks routine to attend Cris’s birthday party and makes an unexpected new friend.

Befriending someone mired in strict routines isn’t easy, but Dell is stubborn when he wants something, and being patient with Taro is easy. From emails to tentative lunch dates, what begins as a simple friendship slowly deepens into something much stronger—and completely unexpected. But Dell knows that for him to be all-in with Taro, he not only needs to come to terms with his sexuality, but he also has to be honest with himself and his family about the absolute worst moment of his life..

Review: This was a well written story about two men, Taro and Dell who both have a lot issues but at the same time are lonely. When they meet they start a slow friendship which evolves into more.

They each help the other face the issues they have and I was so happy for them.

Things are not easy for Taro or Dell but with hard work they make it work for them. Some of dell’s past is so heartbreaking I wanted to hug him. Taro’s OCD at times controlled him but with Dell helping Taro managed it better.

I liked these two as a couple and enjoyed the way they handled the many issues to find a way through the problems into being a happy couple.

Great read with a lot of emotions and drama.