Hi guys! We have C.M. Corett popping in today with her new release 2230: The Perfect Year, we have a great excerpt and a brilliant $10 NineStar GC giveaway so check out the post and enter the giveaway! ❤ ~Pixie~ 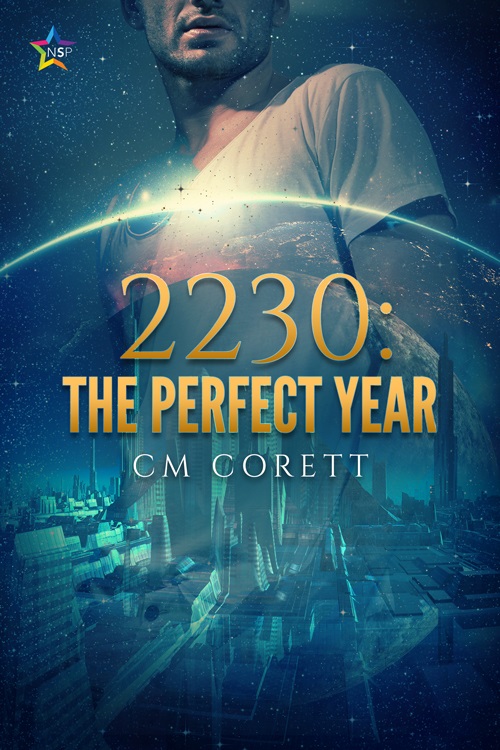 Alex Coulson spends his days as a lowly laboratory assistant. At night, he watches movies in his lonely apartment and dreams of exciting adventures and handsome leading men.

When an electrical fire breaks out in the lab, an experimental machine malfunctions and Alex is caught in the explosion. He awakens, injured and confused, to learn he has traveled two hundred years into the future—to the year 2230. Under the care of the gorgeous Doctor Baylin Davies (a definite contender for a leading man) Alex recovers quickly, and his feelings for Baylin deepen each day. Baylin is handsome, sexy, caring, and a verified genius—everything Alex could ever dream of. Add in the whole concept of living in the future, and Alex soon decides the year 2230 is the perfect year to begin his new life.

But then there’s the major…

Whenever the intimidating military man, Major Marcais, is near, a strange power overcomes Alex’s senses, clouding his mind and weakening his desire to be with Baylin.

When the major reveals he is an alien and declares Alex to be his life mate, Alex must find the strength to resist him. And while fighting for the man he truly desires, Alex just might discover he’s the leading man in his own adventure.

Alex Coulson’s sports shoes made a loud squawk on the polished floor. His step faltered. Had anyone heard? He scanned the cavernous office foyer. With gray marble floors and clusters of expensive couches, it looked nothing like a scientific research center and more like an exclusive hotel. An empty hotel. Of course it was empty; only the truly dedicated work on Sunday. Actually, the dedicated and people like him—sad, pathetic losers without a life. He shook his head.

Okay, Alex, quit the self-pity party. No one likes a whiner.

After another quick glance around the foyer, he strode forward and headed down the long corridor lined with identical doors. The small panes of glass in each one allowed him a glimpse inside the research labs—all empty. He appeared to be the sole, sad, pathetic person here today. At the end of the corridor, he stopped in front of the door labeled “Authorized Personnel Only.”

One wave of his security pass over the sensor and the lab door slid open. The sharp smell of smoke and plastic invaded his senses. His nose twitched. Crap! Electrical fire! No doubt about it. As the wire’s plastic coating melted, it gave off a distinct smell. He scanned the room, searching for the source, but everything appeared normal. He dashed through the main room and into the smaller lab.

Like an early morning fog, a veil of smoke hovered near the far wall, centered over the control panel. In seconds, his heart rate hit full throttle. “Crap! Crap! Crap!” The Accelerator control panel! His focus flicked to the partition wall protecting the experimental machine from prying eyes. Good. No sign of smoke there. That would be bad. Very bad. He dashed into the thickening cloud of smoke and headed toward its source.

With short, gasping breaths, he swallowed and choked on the thick acrid air. What about the fire alarm? Why hadn’t it triggered yet? He slammed his hand onto the control-panel power button and then stepped back. No shutdown. Nothing. Like ocean buoy lights viewed through the fog, the faint glow of backlit buttons and switches remained. He blinked rapidly as his tear ducts reacted to the invasive smoke, creating a torrent of tears. From beneath the watery veil, he focused on the computer screen embedded in the wall. What the hell? Why was the program running? Had he forgotten to close it the previous night? His boss would have his—

A flame erupted behind the control panel.

“Oh, God!” Coughing, he stumbled backward. What should he do? Brave the flames and try to turn off the program? Call the fire department? Fire extinguisher?

He spun around and grabbed the red cylinder hanging on the wall. Maybe he could put the fire out before it caused too much damage. Maybe it wouldn’t even come to the attention of management. He ripped off the safety guard thingy, pointed, and pulled the trigger. The white substance spewed out toward the flames, dousing them in a cozy blanket of white powder. “Ahhh, yes. Against all expectations, Alex Coulson saves the day!”

His boss would be pleased with him. Okay, not pleased exactly because he had most likely left the Accelerator program running, but pleased because a major fire would have brought their unauthorized work to the attention of management. “And that would be bad.”

With a few short blasts of the fire extinguisher, he completed the blanket of white over the control board. He frowned and contemplated the scene. A little more wouldn’t hurt. Better to be safe than sorry. Crouching down, he directed the nozzle under the desk and pulled the trigger. Just in case.

He stood up and surveyed the room. Okay, it could have been worse. The whole lab could have gone up in flames, destroying countless hundreds of thousands of dollars’ worth of equipment. Not to mention the oh-so-secret data his boss guarded as if it held the answers to the universe. Yes, it could have been much worse.

He drew in a deep breath…and doubled over with the force of a violent coughing fit.

Crap. Smoke. Not a good idea to take deep breaths.

Fire extinguisher still in hand, he stumbled back to the main lab. His breath rasped in his throat, forcing its way past raw, inflamed flesh. At least the air in the main lab remained relatively smoke-free. In a few minutes, he would re-enter the inner lab and clean up the mess. With a bit of luck, the damage would be minimal. Maybe he could fix it himself. Clean up the fire retardant, replace a few wires, and—hey presto! Good as new with no evidence of the program he left running—no cause to fire him.

The shrieking of an alarm pierced the air, assaulting his eardrums with shrill vibrations. He closed his eyes and mouth, scrunching and squeezing his face as if trying to block the sound from entering any other orifice. A millisecond later, a deluge of water erupted from the ceiling sprinklers like an unexpected shower of summer rain. The muscles in his jaw slackened, and his mouth fell open.

Water drummed on his head and shoulders, seeping under the collar of his jacket. Mini rivers flowed across computers and desks before cascading to the shallow lake forming on the floor. The fire extinguisher hit the ground beside his foot with a waterlogged clunk.

I’m a dead man. Not to mention fired!

His shoulders slumped. Could his life get any worse?

The floor shook, sending vibrations up his legs and into his queasy stomach. Oh shit. Rule number one: never ask if it could get any worse. What the hell? An earthquake? Light exploded from the inner lab, propelling bright sparks through the doorway like tiny shooting stars. Water sloshed around his feet as he stumbled backward. The Accelerator! “Oh, shit, shit, shit!”

A loud humming joined the vibrations. It pulsed through his body, loud enough to be heard over the sprinklers and fire alarm, shaking him to the core. Paralyzed, he stood transfixed. The inner lab glowed with a pulsating green light, matching its beat in harmony with the tremors running through the building and his body.

The vibrations were so intense he couldn’t move his legs. His head hurt and numbness crept over his face. He clutched his head and squeezed his eyes shut. Vibrating, pulsating, and humming. Could his brain explode? Would they find his gray matter splattered all over the lab and floating in the newly formed lake?

As he opened his eyes, a fresh shower of sparks shot toward him. Burning! His arm burned, stinging like the devil at a precise spot on his forearm. He slapped the sleeve of his jacket like a maniac until the pain receded to a dull ache.

In his mind, he stumbled toward the door, but his body refused to cooperate. He looked down. His legs were—

What the hell? His body appeared pixelated and a few sections were…missing? Whoa! There was some weird, scary shit happening.

The humming intensified, sending a wave of nausea through his stomach. He couldn’t feel his legs. Were they still attached to his body? The world tipped and then faded around the edges. No, no, no! He’d seen the experiments, and he had no way to stop the Accelerator from frying him—like those rats.

At least no one would miss him.

Searing hot pain exploded in his head like a— CM Corett is an Australian author of M/M romance who has given up on trying to limit herself to one sub-genre. She writes contemporary, historical, sci-fi, and time travel… and she may have a few paranormal drafts hidden under the bed! An avid writer and reader of love between men, she has lived in the USA and traveled the world gathering inspiration for her stories. She loves movies, superheroes, and video games with awesome graphics. She hates housework and anyone who expects her to notice (or care about) the dust on top of the fridge.