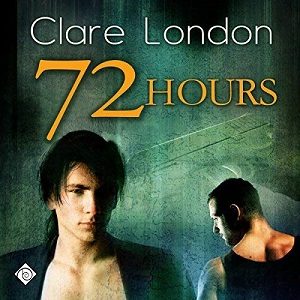 Blurb: Tanner Mackay and Niall Sutherland were once far more than just fellow intelligence agents. But then a mission went horribly wrong and everything fell apart, sending Tanner into hiding and splitting the team and their affair wide apart. Now an unknown traitor is threatening the team, and their ex-boss is determined to reunite them before it’s too late. She finds Tanner in a run-down trailer park, bringing with her a most unwelcome refugee in need of temporary sanctuary: Niall, the man he thought he’d never have to face again. The man he’s sure feels exactly the same in return. Trapped in a situation that’s both claustrophobic and highly dangerous, Tanner and Niall will have to revisit their past and reconsider their perceptions, their loyalties, and their desires, in order to survive, let alone forge a future together.

Review: Clare London is not unfamiliar author to me – I’ve read a few of her books in the past, although 72 Hours is the first audio book I’ve heard from the same author. However, I will say from the outset that this book for me was not as enjoyable as other books. Yet, I will also say that the narration by Michael Pauley really did add to the book in a way that kept me going. This is the first time I’ve heard Pauley’s narration (that I can think of anyway) and I really enjoyed his tone and inflection throughout the story.

As for the book itself, Tanner and Niall work for some sort of shady, MI6 type of agency and they are currently in all sorts of trouble. Their affair ended in a mess when their personal life spilled over into a mission that they were working together and left their reputations in tatters. Tanner decided that it was best to all but fall off the face of the earth, while Niall continued. When the agency is compromised, and Niall is need of a safe house, it is Tanner who is meant to be the knight in shining armour.

While I found the book enjoyable and the story well-paced for the most part, I know that there were a couple things that really detracted from my enjoyment of the story. For the most part these guys took miscommunication and childish antics to a level that makes me wonder how the hell these guys made it as secret agents and successfully pulled off missions before they got together. One thing that

I thought was pulled off well was the writing from Tanner’s POV – because despite my earlier criticism it was great to see him grow by the end of the book, because let’s face it he was a bit whiny at the start of the book. I will admit, I really liked their chemistry and it really worked. Unfortunately, though, for me there was a lot of unnecessary drama and a predictable villain that detracted from the storyline, which overall was really fun.