Hi guys! We have Kale Night stopping by with the tour for her new release A Broken Winter, we have a great exclusive excerpt and a fantastic $10 NineStar GC giveaway so check out the post and enter the giveaway! ❤️ ~Pixie~ 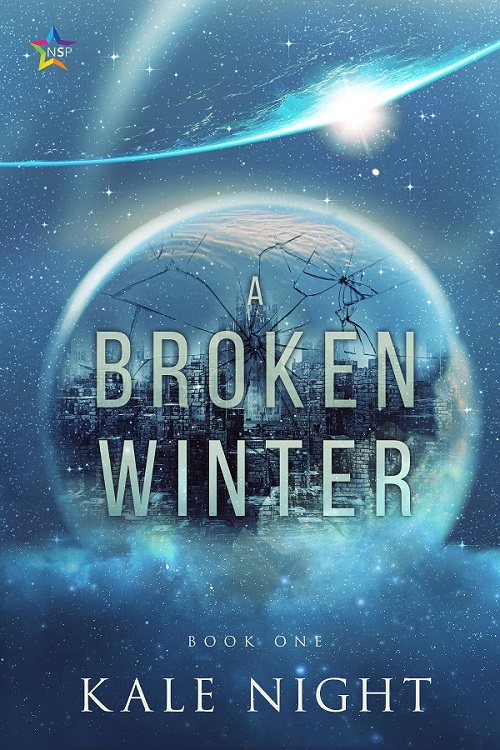 I’m sharing an exclusive excerpt from A Broken Winter. This is one of my favourite scenes. It’s entertaining, but horrifying at the same time, in the sense that you see Reisen digging himself a deeper and deeper hole. He’s aware the emperor considers him a bit of a radical, but also sees himself as being above the law, due to the importance of his research. He’s confident that he can say whatever he wants without any consequences. This confidence finally allows him to connect with Auryn on a more intimate level.

Reisen never talked about what the inkworm did to him. He swore he wasn’t infected, and as far as Auryn could tell, he was telling the truth, but there was a noticeable change in his attitude. Reisen became withdrawn and antagonistic towards almost everyone, but never Auryn. Auryn wasn’t sure what made him an exception, until he saw the way Reisen looked at him—eyes glued to his body like a second skin, eradicating any doubt he had that he was alone in his perversion.

They were in a meeting. General Sycorax was talking the usual crap. They could all sense it, but Reisen was visibly agitated, every carefully manufactured lie another thorn in his flesh.

Sycorax showed off charts. Graphs. “In conclusion, the planet is cooling at a rate of five degrees centigrade per annum and will continue to do so indefinitely, unless collective enlightenment is achieved and His Holiness Emperor Haken deems us worthy of regaining the sun.”

“Do you have any idea how stupid you sound?” Reisen said, barely louder than a whisper. Auryn heard him. Kicked him under the table.

“No problem. You’re asking me to sit here and forget everything I know about astronomy, astrophysics, and stellar nucleosynthesis. I see nothing wrong with that. However, for future reference, a star doesn’t disappear overnight. We can’t even consider the possibility that the sun died on its own, because the solar mass of a star likes ours dictates that as it dies, it evolves into a red giant, incinerating everything in range. Seems to me global cooling is the opposite of death by burning, so, seriously… What the fuck?”

Sycorax gritted her teeth. “You’re mistaken if you think pseudo-science and blatant heresy have any place in this organisation.”

“When I was a kid, I was obsessed with shit.” Reisen. Shut. Up. “My first act of literary criticism was taking a big steaming dump all over a book I hated, knowing my poor mum would be forced to throw it away and I’d never have to listen to her read it again. I dug holes in my backyard and filled them with shit, a five-year-old warlock brewing concoctions in noxious pits. My nickname for the street leading up to our house was ‘poo road.’ I’d shit in the bath with my cousins, as one does. When my mother discovered I was using her camera to catalogue my specimens I was forbidden from playing video games for a week. An entire week. If you were looking to torture a six-year-old boy in the eighties, that’s the way you went about it. Take away a pair of Italian plumbers and there was nothing left to live for.”

At that point, he decided Reisen had officially lost his mind. Maybe it was substance-related—something he was smoking. Maybe he’d folded under pressure, followed his former roommates’ example and taken a vacation from reality. Gods, maybe whatever the inkworm did to him finally fried his brain.

“What the fuck is your point?” Sycorax percolated with rage.

“My point is, I’m not a little kid anymore, and I’m tired of shit. Your shit, specifically.” Reisen stood up and left, leaving stunned silence in his wake.

Auryn finally said something. “Ah… Kaneko hasn’t been feeling well lately. Think he might be sick.”

“I don’t give a fuck if he’s dying. See to it that he gets his priorities straightened out. Beat some sense into him if you have to.”

He found Reisen stretched out in his bunk. “Have you lost your mind?” he inquired, more afraid than angry. Afraid of what might happen if Reisen’s attitude didn’t dramatically improve, if he couldn’t convince their superiors he was harmless.

“Take your shirt off.”

“What?” He hadn’t heard correctly.

“I’m running low on algae paper and I’d rather draw on you.”

“I’m not rewarding you for acting like a psycho!”

“Please?” Reisen reached for him.

Auryn’s resistance dissolved. He unbuttoned his shirt, stripping down to a white T-shirt. “I can’t believe I’m doing this.” His skin radiated a nervous tingle. Reisen studied him with excruciating fondness. “You’re exasperating.”

“You say that like it’s a bad thing.” Reisen produced a well of ink, coating the bristles of a rabbit-hair brush. The ink was strangely warm on his skin. Auryn’s cheeks burned, heat trickling down his spine and pooling in his groin. He sat as still as possible, grateful Reisen was too engrossed to notice his hardness. Or so he thought, up until the moment Reisen’s lips parted against his neck, electrifying him. His cock throbbed painfully, dampening the front of his uniform.

He knew what he would do if he had any sense of self-preservation. He’d get up. Put his shirt back on. Pretend it never happened. Pray for their souls. He turned and kissed Reisen instead.

He’d never kissed a woman, let alone a man. There were plenty of opportunities to share himself with the opposite sex, but looking at a woman was like glancing over a passage in a book he’d lost interest in—he knew she was there, but none of the details registered. Reisen was different. Reisen was always there, painfully apparent.

It didn’t take long for guilt to set in, accompanied by the shame of allowing his cock to override his brain. What they were doing was dangerous. Defying the natural order was punishable by death. It was unholy. Emperor Haken said so, and His Holiness had no reason to lie. Gods had an obligation to be honest, lest their flock lose faith in them.

He was risking Reisen’s life along with his own and flirting with divine retribution; punishment in the next world as well as this. He broke the kiss and then stared down at the bed, flooded with uncertainty. “I don’t know if I can do this.”

“Ryn… it’s okay.” Reisen reached for his hand, holding it. “If you need more time—”

“I don’t want more time.” It would be squandered. Used to second-guess everything. To convince himself Emperor Haken was right and Reisen was wrong and no unnatural predilection was going to stand between him and following the path of righteousness. To die bitter, frustrated, confused, and alone. “I want you.” Kale currently resides outside a small town in northern Alberta, where she works in a library. She’s an avid reader with an English degree from the University of Calgary. In her spare time Kale loves playing video games, making chain maille, watching anime, and cultivating a steadily expanding bonsai collection.