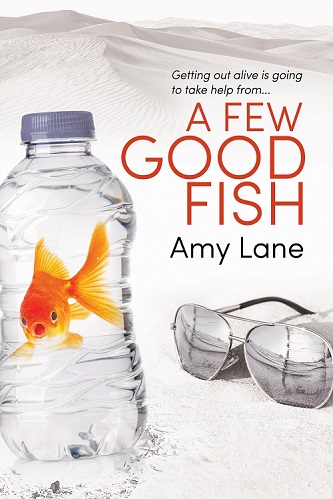 Series: Fish Out of Water 03

Blurb: A tomcat, a psychopath, and a psychic walk into the desert to rescue the men they love…. Can everybody make it out with their skin intact?

But their previous investigation poked a new danger with a stick, forcing Jackson and Ellery to leave town so they can meet the snake in its den.

Jackson Rivers grew up with the mean streets as a classroom and he learned a long time ago not to give a damn about his own life. But he gets a whole new education when the enemy takes Ellery. The man who pulled his shattered pieces from darkness and stitched them back together again is in trouble, and Jackson’s only chance to save him rests in the hands of fragile allies he barely knows.

It’s going to take a little bit of luck to get these Few Good Fish out alive!

Review: Jackson and Ellery are back in the fight. Jackson just can’t seem to stop getting shot, stabbed and well you can imagine. Although this time it might just be worth it to save Ellery. The killer from the past has friends or leaders that want the same reaction as the others. It seems like someone is making killers who have no thought to life. When a young woman is killed in front of her children and another is blamed, it is up to our guys to prove it wrong. It brings some friends into the fight to help.

When Ellery is taken the ones behind it make an even bigger mistake, they take Ace as well. So you have Jackson, Sonny, Ernie and Burton in the mess, but Ellery’s mom as well. The bad guys won’t know what hits them.

The story itself is top notch however the religious aspect in this book was to much. I look for danger, death, sexual heat, excitement but you get that and more. Also the title is what made me not read the book as fast as normally. I didn’t recall the story itself but when I went through my library and saw the title, well I passed it on by. Also the way the guys talk is a bit to much, they don’t come off damaged as well as uneducated which is not the case. But back to the religious parts, it was to much and made the story drop quite a bit in my mind. It almost had me putting the book back down. Plus the boyfriends, Jackson and Sonny come off more damaged then you would expect but Ernie is made to sound the same way. It is like the author has given you one strong and one damaged through out the whole series which is nuts. One is fine but multiple characters with pretty much the same damage is asking too believe to much.

Now the story itself rocked, the danger, suspense, action were pretty much a hit with me. I did like the characters quite a bit but not how they came off. As I said above the title didn’t pull me in but the opposite. It might have been meant to come off catchy but it came off as goofy instead. I am a fan of the plot and characters, however not a fan of the same cooky cutter styles.