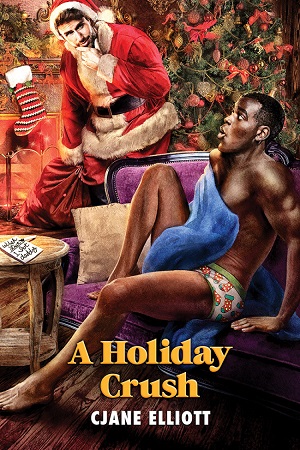 Blurb: San Francisco lawyer Brad Halberstam is in a rut. At forty-one, he’s successful but alone. Even his holidays are predictable—he spends every Christmas golfing in Napa with his ex-boyfriend. Then attractive but oh-so-young filmmaker Michael Blair invites him out. Brad joins Michael and his housemates in their holiday celebrations and learns that life can be joyful. He hesitates to saddle Michael with a much-older boyfriend but as their attraction ignites, Brad’s tempted to let Michael sweep him into a bright new future.

Michael lives in a group house in Berkeley. He loves making life into a celebration, especially during the holidays. Michael longs for a partner, and he hopes serious but sweet Brad Halberstam is the one. Michael’s infatuation grows over caroling and cookies, but his housemate reminds him that Michael always latches on to someone during the holidays, so he won’t be alone. After a misunderstanding, Michael loses heart, no longer sure if his relationship with Brad is real or just another Christmas crush.

Review: Brad was a successful lawyer in San Francisco but not successful in his love life. His relationship with his parents are not the best, so every Christmas he goes with friends to Napa. He needs a new life it would seem. He sets his eyes on a very sexy young man who is filming the court case but isn’t to sure about what to do. Michael takes the choice out of his hands.

I got a kick out of this story and would love to read more about them. Although I could have done with out the political stuff involved in it, the message was received. It just made the Christmas tone a little set back and made if focus on the hate for those in politic’s. Although I do agree all the way, I would have wished the story to be just a bit more about them. Other than that issue, this story rocks.