Hi guys! We have L.A. Witt popping in today with A.J.’s Angel, we have a great excerpt and a brilliant giveaway so check out the post and enter the giveaway! ❤ ~Pixie~ p.s. keep an eye out for Lisa’s review! 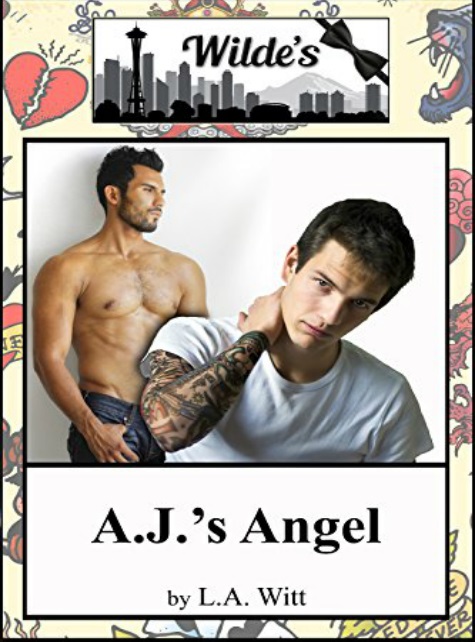 Luke Emerson is the last person Sebastian Wakefield expects to see strolling into his tattoo shop. But Luke’s not back after four years to take up where they left off. Not even to apologize for the cheating that broke them up.

There are dozens of tattoo shops within a hundred mile radius of Seattle, and Luke Emerson chose to come waltzing through the front door of mine.

It was a damned good thing I wasn’t with a client right then. It was midday, midweek, so we weren’t all that busy, and when the bell above the door jingled over Jason’s buzzing tattoo needle, I had my feet on a desk and my nose in a trade magazine.

Fortunately, that meant I didn’t screw up a tattoo or injure someone when I nearly jumped out of my skin. Unfortunately, it also meant I was conspicuously not busy. Slimeball ex-boyfriend or not, he had to be treated like a potential client, particularly since there was another client present.

I set my magazine down and dropped my feet to the floor. On the way across the short expanse of space between us, I supposed I could have looked anywhere but right at him until I absolutely had to. But no, I used that time, those few steps, to force myself to get used to the sight of him. To drink in what I’d hoped never to see again.

Damn it, why did he still have to be so good-looking even after all these years? Time and again I’d wished on him a beer gut, a rapidly receding hairline, or at least a generous helping of gray hair. Preferably all three. Sure, it was petty and childish, but giving myself a laugh over it beat the hell out of hurting.

My wish wasn’t granted. Four years had chiseled away some of the youthful roundness of his features, leaving him with cheekbones nearly as sharp as his jaw. His dark hair was still thick and full without a strand of gray in sight. His sleeves, rolled to just below his elbows, revealed sculpted, lightly bronzed forearms. It would be just my luck that every last inch of him was equally toned and tanned.

Then there were his eyes. Those damned beautiful ice blue eyes. They hadn’t lost a bit of the intensity that had always made me weak in the knees, but I refused to allow them to have that effect on me now.

I wasn’t the only one doing a little drinking in. He made no effort to hide the slow down-up of his eyes, nor was he subtle about the pauses. Once at the tattoos making up my mostly finished right sleeve. Then at the long-since-completed left sleeve. My face. An upward flick to my eyes then a little higher. Wry amusement curled his lips, probably at the sight of my eyebrow ring. He’d always loved my penchant for ink and piercings. Too much of a self-described wimp to get any of his own, but he’d certainly been enamored of mine.

As he looked me over again, I wondered if he was trying to imagine what new ink work and jewelry I hid beneath my clothes. Several more tattoos and a pair of gold hoops, but he didn’t need to know that.

Our eyes met again, and an instant later, he dropped his gaze. Not out of shyness, though. Not even close, considering that dropped gaze went straight below my belt.

I cleared my throat and casually jammed a hand into the pocket of my jeans. “Long time no see.”

He looked up, not even a flicker of embarrassment in his expression. “Yeah, it’s been a while, hasn’t it?”

Not nearly long enough, I decided, but I forced myself to stay cordial. “So, what brings you into my shop?”

He grinned, making sure to flash his straight, gleaming teeth, every last one of which I wanted to knock out of his head. “I’m interested in getting a tattoo.”

Oh? “Open for Business” above your ass? Or “Village Bicycle” on your dick?

“Well, you’ve come to the right place.” I shifted my weight. “What did you have in mind?”

He took a breath, and I swear he set those broad shoulders back a little more. A gesture of arrogance? Nerves? I couldn’t be sure.

“I want…” He paused, dropping his gaze for a split second. “Um, it’ll be a custom design.”

Luke shook his head. “I want you to design it. And put it on.”

I glanced at Jason and his client then lowered my voice and eyed Luke. “Why me?”

“Because I like your work.” He grinned again. “I always have, you know that.”

“I’m also not the only artist in town.” My eyes narrowed. “As you well know.”

He flinched and looked at the counter between us. “Sebastian, please. This one is important to me. I wouldn’t let anyone else do it.”

I clenched my jaw. A million barbs rested on the tip of my tongue, ready to demand to know why he thought I should give a flying fuck how important this tattoo was to him, or how much he respected my work, or any of that. But professionalism prevailed, if only because my business partner and a paying client were within earshot. That, and business had been slow lately. Jason and I needed every penny we could bring into this place right now.

I sighed and reached under the counter to get a sketchbook. “Okay, what is it?”

He dug a piece of folded paper out of his back pocket. He didn’t unfold it yet, but gestured with it as he said, “It’ll be something like this, but with a name above it.”

I managed to keep from flinching. Finally decided to settle down with someone? I thought bitterly. Or is this the first name in a guestbook? I barely kept myself from snickering at that thought in spite of the jealousy—no, bitterness. It was nothing but bitterness. It was anger that tightened my chest and turned my stomach. That, and maybe a little pity for whatever sorry bastard was being immortalized on Luke’s person.

I held out my hand for the piece of paper.

“Anything else?” I asked through gritted teeth, unfolding the paper and bracing myself for the inevitable gloating about his new man, his soul mate, or his flavor of the month. I wondered how appreciative he’d be if I mentioned I’d never actually drawn a douche bag on someone’s skin, but I’d be open to doing so if that—

My heart fell into my feet when I realized what the design was. An intricately drawn, elaborately shaded and stunningly beautiful…angel. Looking heavenward. Clutching a folded American flag to her chest.

Inwardly, I cringed, wishing the ground would swallow me up for even thinking what I had. I cleared my throat. “I’m, uh, I’m sorry to hear it.” So many questions. So many things I probably didn’t want to know. I tapped my pen on the sketchbook. “Where do you want it?”

He gestured at his left upper arm, and I fought to keep from shivering. At least it wasn’t going on his shoulders. His arms were spectacular, but the man had the kind broad, powerful shoulders that almost made up for what a dick he was.

I muffled a cough. “Okay, so, this design…” I gestured at the piece of paper.

“Something close to it, anyway. Doesn’t have to be exactly the same.”

I raised an eyebrow. “Do you want it changed in any particular way?”

He looked at the picture for a moment. “No, not really. I mean, it’s fine as is, but, you know, if you want to do anything with it, be my guest.” He swallowed, and when he met my eyes again, any humor or taunting was gone. I wondered if it had been there at all, or if I’d superimposed them myself.

“Any preference for the writing? Font, anything like that?”

“No, not really.” He offered a smile that might have been genuine. “You’re the artist.”

“Do you want the years? Birth and…” I paused.

“Yeah, of course.” I made a few notes on my sketchpad. Then I gestured at the angel drawing. “Do you mind if I hang on to this, or do—”

“Go ahead. I have another copy.”

I slipped the drawing into my sketchpad. “I guess that’s all I need to know about the design, then.” I fought to keep my annoyance out of my voice. He was here to put money in my pocket, he’d obviously lost someone dear to him, but that didn’t change the fact that he’d put me through the wringer a few years ago. There was more to this. There had to be.

The Distance Between Us (Book #2)