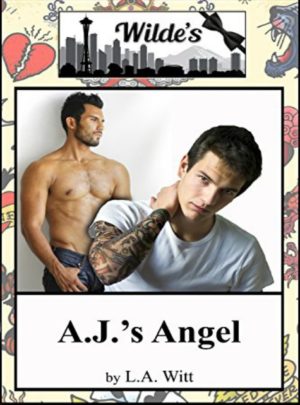 Blurb: Luke Emerson is the last person Sebastian Wakefield expects to see strolling into his tattoo shop. But Luke’s not back after four years to take up where they left off. Not even to apologize for the cheating that broke them up.

Review: Luke and Seb had once been in love but that had all ended with Lukes cheating and then leaving. Seb remembers it all and has mixed feelings. Now four years later Luke is back. Luke is back to get a tatto for someone that had died in the war. Seb doesn’t want to start over with the man he had loved, but his heart seemed to want something more.

Luke had been an asshat while they were in school. Never felt a moment of guilt until the last one. A.J. had been someone very special to him but not in the way Seb thought. A.J. had once told him to get off his ass and talk to Seb.

I actually liked what the story was about but not so much the story itself. It was a great idea and I truly felt that if it had been told in a different way then it would have been an amazing hit. However it is a slow moving story that focuses on the past and how much time between appointments and smoking. It just I don’t do cheating and usually won’t read a book where it is even a hint that one of the characters was that much of a creep. However with Luke finally growing up it actually came off ok.

The story itself is full of pain and you could feel it deep in your bones. It is a second chance at love but I didn’t really care for it. I also didn’t care for it being in just Seb’s words. You hear apologies, reasons and so forth, but it doesn’t really move me like it should have. I am sorry but this book just wasn’t for me.