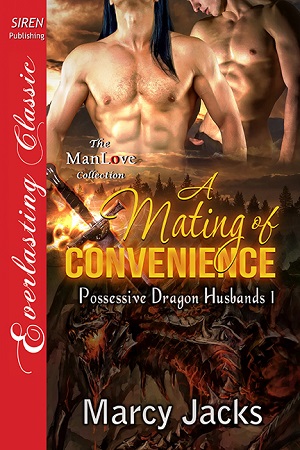 Title: A Mating of Convenience

Blurb: For Jake, taking care of his siblings fell to him after the death of his step mother, but when his father, the alpha, passes in a fight against the dragons, Jake decides enough is enough, and he’ll stop the war himself so his siblings can have a good life. He’ll climb the mountain and force the alpha to mate with him to make it all stop.

Arthur King (shut up about his name) is stunned when an omega jumped into his bed with a knife, knowing it’s mating season for dragons. Arthur nearly laughed in his face. He thinks that’s how this works? But he does smell good, and Arthur can’t help himself and bites the man anyway. Huh, the spunky little dog is his mate.

But there are those in his clan who will stop at nothing to keep the war going, and have their revenge for the past crimes of Jake’s father. Including coming after Jake.

Review: A feud between dragons and coyotes are at an all time high. Though some do not know the real reasons for the feud. It all comes to light when Jake, a coyote, mates Arthur, a dragon.

The one thing that confused in this story was the only way to know for sure if they are mates it to be bitten by a dragon, then survive the venom in said bite. That blew my mind. What happens if they are not mates will they die from the bite. Seems a bit risky to me.

But aside from that I very much enjoyed the story and reading about the dragons and the coyotes.