Hi guys! We have Christa Tomlinson visiting today with her new release A Sniper’s Devotion, we have a brilliant guest post where Christa shares her playlist, a great excerpt and a fantastic giveaway, so check out the post guys and then enter the giveaway! <3 ~Pixie~ 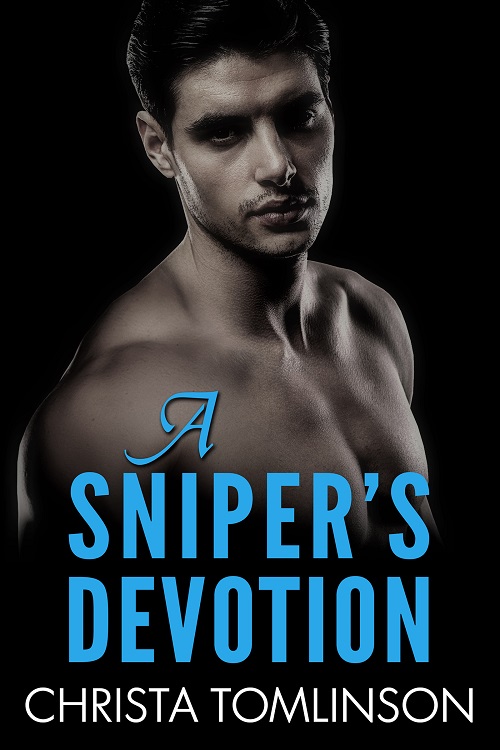 Officer Hector Castillo, a sniper on Houston’s elite SWAT team, is content living alone as a perpetual bachelor. But when he opens up his small apartment to a friend in need, their close quarters awaken long suppressed desires Hector can’t help but acknowledge.

Miguel Delgado’s unfortunate detour down a road he never intended to travel ends in a big wake up call, but he vows to get himself back on track. Though he’s always looked up to Hector, Miguel isn’t a kid with hero-worship anymore, and his schoolyard protector has matured into a strong and caring man – who happens to look damn sexy in his SWAT uniform.

Though their physical attraction to each other is undeniable, Hector and Miguel try hard to resist and protect their friendship. Until one night changes everything… Hello! Thank you for having me on your blog today. I’m thrilled to release my latest and last in the Cuffs, Collars and Love series: A Sniper’s Devotion. This story features Hector Castillo, our cocky sniper from Houston Police’s Department’s elite SWAT team and Miguel Delgado a childhood friend of Hector’s. A Sniper’s Devotion is a friends to lovers romance, but it’s also about growing and learning who you are.

Today I have the playlist for A Sniper’s Devotion. The playlist is heavily influenced by Miguel, since he’s the one who loves music so much. A favorite song to listen and write to from the list was Umbrella by Rihanna. The song’s lyrics are all about standing by each other. Hector is definitely Miguel’s umbrella, but as time goes on, Miguel becomes Hector’s umbrella too. It’s a perfect song for them.

White Wedding by Billy Idol was a late addition to the soundtrack. I put it on at the end of a writing work day, and as I sang along was inspired to write a very fun and sexy scene. That scene became the epilogue to A Sniper’s Devotion. I hope you’ll enjoy the songs I listened to while writing Hector and Miguel’s story. Let me know in the comments or come say hi on social media! “Aaaagh!” Miguel squeaked again, ducking his head into Hector’s shoulder as a mass of zombies burst into the shop where the hero and his family were hiding. “How are you not dying at this?” he asked in an agonized voice.

Hector held back a grin at Miguel’s over-the-top reaction. After the things he’d seen on the police force, it would take more than a jump scare to freak him out. “I’m trembling on the inside,” he said.

“You are not,” Miguel answered with a dry laugh. He started to pull away. “Sorry about that.”

Hector stopped him. “You’re just going to jump back on me anyway. Might as well stay here where I can protect you from the zombies.”

Miguel snorted another laugh, but after a moment’s hesitation, he settled back against him. He rested against Hector’s chest, with his bent legs laying half over one of Hector’s. As the movie played on, the hero and his crew making a perilous escape from the zombie horde, Hector brought his hand up from the back of the couch, absently running it through Miguel’s hair. The curls were soft, sliding through his fingers.

Eventually the action on screen slowed, giving both the hero and the viewers a moment to breathe. Hector’s attention wandered from the screen, and he realized it was strange to have his hand in another man’s hair. He and Miguel were so close, and it was such a habit from watching movies with dates that he’d done it without even thinking. He abruptly stopped. Sitting there stiffly, his hand frozen in Miguel’s hair, he wondered if he should apologize. Before he could decide, Miguel turned his head slightly, his lips brushing Hector’s neck as he spoke.

“That felt nice,” he said in a soft whisper. “Keep going.”

His chest suddenly tight, Hector relaxed his fingers and slowly started playing them through Miguel’s hair again. His eyes were on the TV, but he wasn’t really watching the movie. Neither was Miguel. His face stayed turned into Hector’s neck, warm breath softly blowing over his skin. It was a surprise and yet not when Miguel pressed a kiss to his throat.

At that moment, Hector should have moved away from Miguel. Hell, he should have gotten off the couch altogether. But he didn’t. He sat there, letting Miguel brush more kisses up and down the side of his neck. A hand landed on his thigh. Hector swallowed hard, then turned to look down at his friend. Christa graduated from The University of Missouri-St. Louis with a degree in History. She loves to create stories that are emotional and lovely with sex that is integral to the characters’ romantic arc. Her books include straight couples, curvy couples, gay, and multicultural couples. Love is love and everyone should have their story told.

Christa lives in Houston, Texas with her two dogs, and is a retired roller derby player