Hi guys, we have Jaime Reese popping in with her new release A Sweet Man, we have a great excerpt so enjoy the post! ❤️ ~Pixie~ 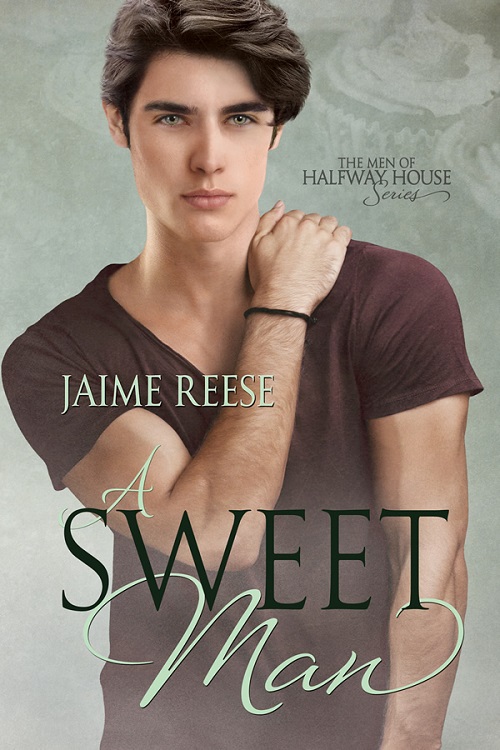 (The Men of Halfway House)
by

Two men. One sweet dream of family and forever.

Gabriel “Bull” del Toro loves his fast-paced globe-trotting job, but aches for an honest relationship and the trust that comes with it. After a few too many heartbreaks, he’s nearly given up hope of finding that special someone.

Born deaf, Ben is used to working twice as hard for what he wants, but risking a newfound friendship on an impossible dream is scary. After all, there’s one lesson he’s learned: everything is temporary—freedom, friends, even family.

Neither man expects the undeniable spark between them or for every moment together to fuel that connection. For the first time, a happily ever after is within reach, but they must trust that the dream of acceptance, family, and a place to call home is more than a sweet fantasy.

It can be forever.

A Sweet Man is an interconnected standalone within The Men of Halfway House series. It is a story about the power of love, the meaning of family, and never giving up on a dream. It includes wounded hearts, an age-gap romance, and enough cake and sweetness to give you a toothache. Ben ran into the bedroom and swung the door shut. He leaned back against the door, gasping each breath while clutching the cell phone to his chest. Seconds. It was all he had before that bastard came barging in to take what he wanted.

Pushing off the door, he leapt over his still packed duffle bag sitting on the floor and wedged his body in the narrow space behind the bed. He grabbed the edge of the bed frame and pushed.

He gritted his teeth and pushed harder, finally shoving the bed on its rusty wheels across the carpeted floor. With the bed bumped up against the door, he had a moment of reprieve to take a deep breath.

His eyes burned as he stared at the door and a memory flashed in his mind.

Once his parole had been granted, Sam had asked him to make a simple decision: Halfway House or this place.

Another stupid decision made.

He glanced around the room—at the peeling paint, dirty carpet, and iron bars on the windows. This place wasn’t Halfway House. Both houses were in Miami-Dade County and about an hour apart, but there was a world of distance between them.

Climbing onto the mattress, he knee-walked toward the foot of the bed. Carefully, he inched closer and flattened his hand against the worn faux wood. One pounding thump against the door vibrated against his palm.

Then another and another, each harder than the one before.

He gasped when the mattress shook beneath his knees.

A punch from Jake would cause some damage—he had a pulsing black eye to prove that.

He pulled his hand away. Even though he couldn’t hear it, he imagined each strike came with an accompanying yell. Maybe even a curse. Or two. He crab-walked backward, away from the door now visibly moving with each strike.

He retreated to the wall, keeping his eyes trained on the single point of entry in front of him. First day at the new halfway house and he already had to deal with bullies.

If he were at HH, things would be so different. The house owners would never allow violence under their roof. Julian would have swooped in like some super ninja and caught Jake’s fist midair.

Ben leaned back against the wall and slid down until his ass hit the dirty carpeted floor. He tightened his grip on the cell phone in his hand. The punch to the face had been a small price to pay if he still had his phone.

Now he realized why Sam had to gain special permission for him to have one. Every place had different rules and having a cell phone was a violation of this house’s rules. That detail hadn’t clicked until two other residents had practically salivated at the sight of his phone when he had pulled it out from his back pocket to view the incoming text message. Like a pack of wolves, another resident had joined in. In true alpha form, Jake had pushed the three of them aside and taken the lead, delivering a punch to the side of Ben’s face that had shoved him to the ground.

They had expected him to quiver, give in, huddle into a ball or surrender his phone. They hadn’t counted on him tightening the grip on his lifeline or his speedy escape.

He banged his head back against the wall.

He was tired of life kicking him in the nuts.

Tired of second-guessing every damn thing he did.

Tired of how he kept making the wrong decisions.

Five years ago, he had trusted the wrong people. Friends had used him as a scapegoat and that had resulted in a grand theft charge. The judge had shown him mercy during sentencing, splitting his time—twelve months in jail and four years on probation.

With the jail time completed, he had ended up at Halfway House while transitioning into his probation term. He had been on the right path afterward for almost two years. He had reconnected with his sister and had moved in with her. He had secured a steady job, working with Shaw.

Until the day he had gotten into a friend’s car during his lunch break.

He hadn’t known the car was stolen. He couldn’t have guessed that one choice would have resulted in a probation violation that would send him to a state prison to complete the remaining two years of his sentence.

He screwed his eyes shut, instantly wincing at the pain of his swelling eye.

He missed Julian and his partner, Matt. He missed Ryan and Shaw, the friends he had made during his stay at Halfway House. But he was too embarrassed to see any of them. Regardless of how many times he had analyzed the situation in his mind, it was his bad decision that had landed him in prison.

He wrapped his arms around his midsection. Times like these, he sought the comfort of his plush bunny. He wasn’t a kid anymore, but the worn plush rabbit was stuffed with family memories. Frayed and patched together like the sole survivor of a zombie experiment, the plush toy was likely lost, just like he felt. Or maybe someone had found it and discarded it with a cringe at its horror-movie-like appearance. It wouldn’t surprise him.

His parents, the few people he thought were friends while growing up. The revolving door of families over the years.

His relationship with his sister.

He leaned his head back against the wall and stared at the ceiling, fighting back the tears. She had warned him to stay out of trouble. He hadn’t even had a chance to apologize to her before getting hauled away. He had burned that bridge. More like annihilated it with C4 for good measure.

After that, nothing had mattered. He didn’t care to see anyone else, even though Shaw had tried to visit him several times.

The sting in his eyes reappeared. He needed to look ahead and deal with this current situation. He shouldn’t have resisted Sam’s insistence on returning to Halfway House. But the thought of seeing the disappointment in Julian’s pale green eyes, or his partner’s sad smile, tore through Ben’s heart. He couldn’t risk disillusioning every person who might care. Matt would take Ben’s failure personally. And Julian would console his partner and share that pain.

He couldn’t do that to them.

The phone in his hand vibrated, pulling him from his thoughts. He swiped at the screen, blinking a few times. His heartbeat quickened as panic set in. His vision was a little fuzzy. Dammit. The black eye was going to be a problem. He needed the clarity. Otherwise, he’d have trouble reading text messages and other people’s lips. He pulled the phone closer and farther away, hoping to pinpoint a spot in his line of sight that would make the display clearer to read the new text message.

You didn’t respond. You ALWAYS respond. I’m on my way.

The knot in his chest lessened reading Sam’s words. His reintegration officer hadn’t given up on him after dropping him off at this nightmare of a house a few hours ago. He glanced up at the door when the bed shifted. Jake was pissed—pissed enough to hit the door hard enough to move the bed on the carpet.

He had to get out of here. Now.

He quickly texted a reply. I can’t stay here. His attention snapped up when the bed shifted again. He kicked out his feet and pushed them against the bed frame, hoping to add some additional resistance until Jake tired himself out. Please hurry, he wrote in another text before Sam had a chance to respond.

Life hadn’t been kind, but he managed the best he could, always trying to find the good in others.

But the people outside that door, in this place…there was no good here to find.

Ben closed his eyes and held his phone close to his chest, willing Sam to respond. He gasped when the phone vibrated moments later. He blinked a few times, focusing his vision, and releasing a shaky breath at Sam’s reply.

I’ll be there soon. I called Aidan. He’s on his way.

Ben’s shoulders slumped. Relief or embarrassment, he wasn’t sure. He battled with the nagging tug in the back of his mind, worried about seeing the detective again, the one who had taken the time to help Ben reconnect with his sister after so many years.

But he’d take the embarrassment. Aidan was the only man who could likely stop Jake with a simple glare, and make a few phone calls to push Sam’s request through the system to move Ben elsewhere. Right now, he’d take the rescue any way he could get it. Welcomed it with open arms, even if he needed to beg or subject himself to a reprimanding lecture.

They would eventually take his phone and wouldn’t care about the damage they left in their wake. A black eye could easily lead to a broken arm or hand if he continued to resist. Without his phone or use of his hands, he wouldn’t be able to communicate in the hearing world.

He closed his eyes and leaned his head back against the wall.

After leaving his childhood home, there had only been one place where he had felt safe.

Right now, that was exactly where he needed to be.

He just hoped Sam arrived in time to take him there. The Men of Halfway House series! Jaime Reese is the alter ego of an artist who loves the creative process of writing, just not about herself. Fiction is far more interesting. She has a weakness for broken, misunderstood heroes and feels everyone deserves a chance at love and life. An avid fan of a happy ending, she believes those endings acquired with a little difficulty are more cherished.