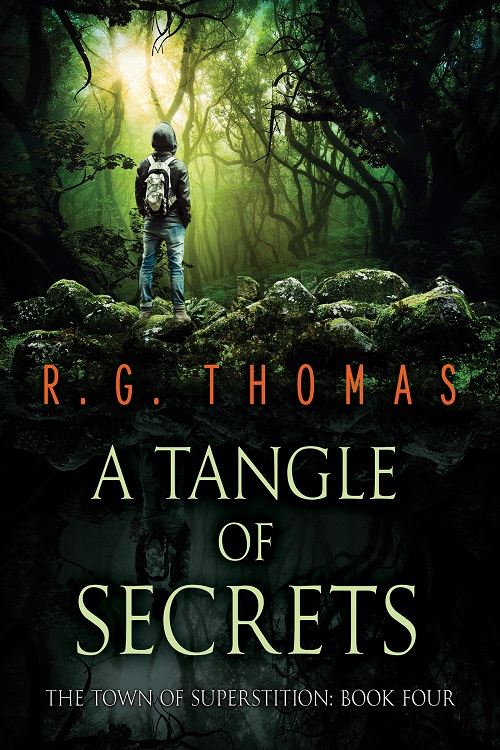 Well, it’s one of the questions. And with apologies to Mr. Shakespeare for mangling his famous line, it’s something I gave serious thought to when I started writing The Midnight Gardener, the first book in my Town of Superstition fantasy gay romance Young Adult series. I knew how I wanted it all to begin, and the feeling of magic I hoped to capture. The main character, Thaddeus Cane, from whose POV the series is told, has been isolated as he’s grown up. When the reader first meets Thaddeus, he is fifteen-years-old and unpacking for the thirty-second time. He is in another new bedroom in yet another new town, about to start all over. This time, however, it’s the middle of summer, so he has some time to get used to the town with the odd name of Superstition before he has to go to school. Thaddeus has a good relationship with his father, Nathan, but because they’ve moved so many times, he has no close friends. With no close friendships, he’s become a bit of a recluse and is really quite innocent.

I came up with his backstory purposefully, not only to add a bit of mystery — Why has his father had them move so many times? What happened to Thaddeus’s mother? — But to also separate Thaddeus from other kids his age. I had big plans for him throughout the series, and I wanted everything he was going to experience to have an impact on him. My idea of Thaddeus was something akin to myself and the kids I knew growing up in the 1970s (yes, I am THAT old and writing Young Adult, go figure!). Back before the Internet, and cell phones, and social media, when we hung out all day and went home when the streetlights came on. I feel fortunate to have been able to experience that period of time, and I really wanted to try to recreate it, especially in the first book of the series. So instead of a kid who’s keyed in on the latest social media buzz or nurtures a cynical outlook, he’s a little bit of an awkward outcast.

When Thaddeus meets Teofil Rhododendron, not only is there an instant attraction, but the two really have quite a bit in common. Teofil has been raised on his own by an older man named Leopold, away from his family and any other kids his age. In many ways, Teofil is even more innocent and naive than Thaddeus. This attraction and relationship is new to them both, and they are finding their way together.

The four books in the series cover a lot of ground, both in physical distance and emotional experiences. But everything that happens in the first three books occurs within six weeks. And the latest book, A Tangle of Secrets: The Town of Superstition Book Four, covers the following six weeks. During this time, Thaddeus deals with starting yet another new school, and the wrath of a bully. This time, however, along with his father, he has Teofil and the whole Rhododendron family waiting for him after school, and he feels more connected than he ever has before. There are challenges to come, for Thaddeus and Teofil both, and while their attraction is growing more serious, it did not seem like the time for it to progress to something more physical. There were still serious questions that needed to be answered. Each of them have much to learn yet, and while they’re working to figure things out together, they may eventually reach the point where they will take the next big step in their relationship. But for now, they are more than satisfied with what they have. 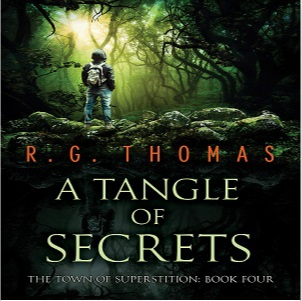 Teofil came up behind Thaddeus and put his arms around his waist to pull him up against his chest. “I’ve missed you.”

Thaddeus closed his eyes and leaned back against him as he rested his hands over Teofil’s. “I’ve missed you too. Have you been locked away up here the entire time?”

“Not the whole time,” Teofil said. “Mum’s been making me eat dinner downstairs with everyone.”

Thaddeus chuckled as he imagined Miriam badgering Teofil out of the room and down the stairs to the long dining room table.

“When will you be home?” Teofil asked and nuzzled Thaddeus’s neck.

“That tickles,” Thaddeus said as he pulled away. His laugh faded when he turned and saw Teofil’s serious expression. “What is it? What’s wrong?”

Teofil looked away. He hesitated a moment, then shrugged before looking back at Thaddeus. “I guess I’m mad at myself for sitting up here reading these last few days when we didn’t have much time left to spend together.”

Thaddeus frowned. “You make it sound so dire. I’m only going to school, Teofil. I’ll be home after three.”

Teofil stepped close and kissed him. The resulting shiver that went through Thaddeus made him realize how much he’d missed spending time with Teofil. He returned the kiss, then stepped back. “I need to go.”

“I hope it goes well,” Teofil said. “Are you nervous?”

Thaddeus had been nervous, but Teofil’s kiss seemed to have smothered that feeling with a warm glow of satisfaction and love. “It comes and goes. I’ve done this a lot, so I think I’m prepared for it.” He hesitated before saying in a lowered voice, “But this time feels different than all the others.”

Teofil nodded and took his hands again. “This time you’re starting school as a wizard.”

“Yeah,” Thaddeus said with a nod. “It adds a different layer of… I don’t know…. Complexity, I guess? Another secret I have to keep from everyone. Not only am I gay, I can do magic, too. And while it’s really awesome and I’m happy I know the truth about my heritage and have learned some amazing abilities, it also makes me even more of an outsider, you know?”

“I can’t imagine,” Teofil replied. “I’ll be right here waiting for you to come home.”

R.G. Thomas has been reading books from an early age. As a young gay man, however, he found very few characters with whom he could truly identify. Now that he’s an adult—or at least older than he used to be—he likes to write stories that revolve around gay characters. The Town of Superstition is his YA fantasy gay romance series which includes wizards, witches, and other magical creatures.

When he’s not writing, R. G. Thomas loves to read, go to movies, watch some TV, and putter around in the small suburban patch of ground he calls a yard. He visits his mother once a week, not just for the free cookies, and enjoys spending time with close friends drinking wine and making up ridiculous things that sometimes show up in his books. Although he hates the process of travel, he does enjoy experiencing new places. His dream trip is to one day visit the country of Greece, and he is currently saving his nickels and dimes to make that a reality.

Twenty years ago he met a man who understood and encouraged his strange, creative mind, who made him laugh more often and more freely than anyone else. They were officially married in November of 2015 and today they still laugh often as they live in a suburb just north of Detroit with their two cats who act as both muse and distraction to him while he writes.