Hi guys, we have Elvira Bell popping in today with the tour for her new release Ablaze. We have a fantastic guest post from Elvira, a great excerpt and a brilliant giveaway so check out the post and enter the giveaway! ❤️ ~Pixie~ 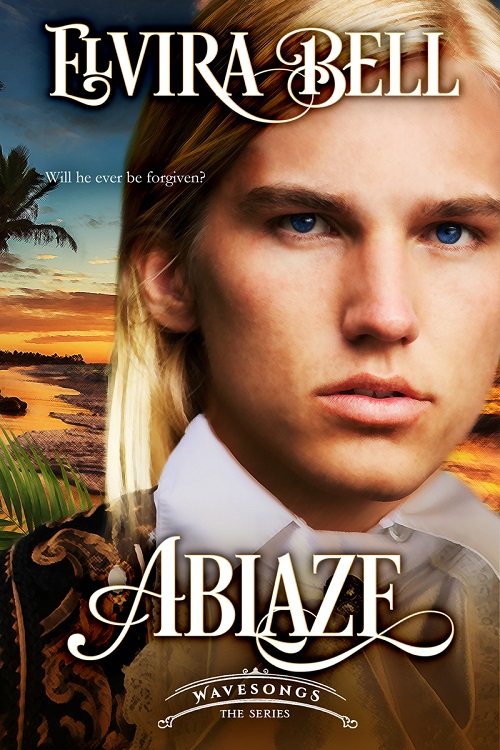 The final book in the Wavesongs series!

Nick Andrews has returned to the Caribbean—but the world he remembers has changed for the worse. Despite the dangers, he needs to find a way to get to Corona. All he can think of is to reunite there with the love of his life.

Meanwhile, Tom is watching his every move. Tom, who has turned cold and demanding, and is desperate for Nick to love him.

One night things get out of hand, and something happens between them. Something unforgivable.

Most writers have a dream cast for their books, right? I know I do, and I don’t want to know how many hours I’ve spent putting it together and image googling to find the perfect photos where this or that actor most resembles my character. For me, this is an important part of finding out who my characters are and what they are like. Also, it’s one of my favorite things about planning a new story.

For Wavesongs, I spent many years trying to figure out what Christopher looked like and who resembled him most. Alain Delon was my top choice for some time, but then I realized that none could be more perfect than Jude Law. Who is one of my favorite actors, and who I embarrassingly enough also modelled Raphael in Entertaining the Sombrevilles after (be it a much younger version of him—his portrayal of Bosie in Wilde).

Nick used to look like the wonderful Douglas Booth for the first few years of his existence, but then he had a personality change and Alex Pettyfer was a much better choice. Still blond and pretty, but with more attitude.

Tom, the man who tries to come between them, I always imagined looking like Sam Claflin. Other actors I’d like in my dream cast for Wavesongs are Hugh Jackman, Matt Bomer, Gerard Butler, Carey Mulligan, Christoph Waltz, Penn Badgley… The list goes on forever because honestly, this series has so many characters (I always end up with lots of them). Now I look forward to finding the perfect cast for my next project! Tom is sullen and quiet as he gets ready for bed. His chamber is at the corner of the house, three times as spacious as Nick’s room next door, and far away from O’Connell, whose quarters are next to the kitchen and dining hall. There’s fresh water by the washstand, clean bed linens, and a mirror on the wall—but Tom complains about the mosquitoes, the humidity, and the house’s size.

“Just one floor, like a house for poor people… and nothing is beautiful here, nothing! How am I supposed to live like this?” He lies down in bed, curling up before giving Nick a hard look. “But you think it’s all fine, don’t you?”

“No.” From what he’s seen so far, Harrow Hall is not a good place. That whip in Buckley’s hand… “Why would I think that?”

Nick goes into his own chamber. His body is sore, exhausted, but once he’s in bed he finds it hard to sleep. From the other part of the house comes the sound of voices, laughter. O’Connell and his men sampling their own rum, probably.

There is nothing to like about this place, but Nick won’t stay long. He’ll take the first opportunity to leave. One lucky winner will receive a digital copy of Astray, the first book in the series!