Hi guys, we have Emmalynn Spark stopping by today with her new release Abundance, we have a great excerpt and a brilliant $10 NineStar GC giveaway, so guys check out the post and enter the giveaway! ❤ ~Pixie~ 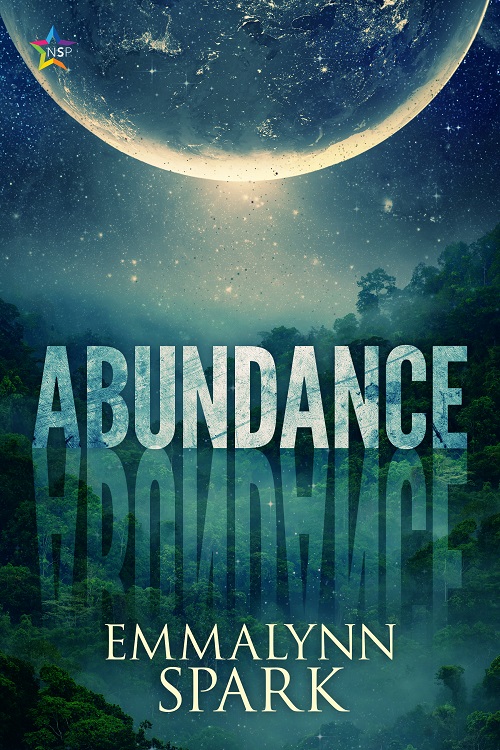 Alex is part of Earth’s last hope: a crew member on a ship sent out from a dying planet, wishing for a second chance. He wakes from his cryo pod to find destruction. Their mission has failed, he and his commander, Luke Belka, are the only ones to survive the journey.

Luke insists that help must be coming, that one of the other ships on the mission must also have reached this planet. Whether or not he’s right, they will need to survive on this lush alien planet. And maybe find happiness along the way.

I blinked awake groggily. Around me, there were urgent noises that I knew were important, but none of them quite caught my attention and, when I tried to twitch my arms and my legs, they weren’t moving right.

I drifted up two, three times. The last time, I was aware enough to know I was still in the pod. Still hooked up to the machine that breathed for me. Still drifting in fluid. There was an alarm. Someone should turn it off. Someone would be by shortly to let me out. I was probably low priority.

I drifted back to sleep.

Things were sharper this time. The alarm, for one. The mist in my brain that’d held it away was receding, and now its panicked shrieking was piercing right through. I wriggled a little, happy to find I could. My limbs were listening again, admittedly in a jerky way. I was cold, still. So cold.

Something was very, very wrong. I tried to parse it, but my brain was like cotton wool. Thoughts tripped over themselves, half started then drifted away as I tried to really bring them into focus, then danced about the corners of my mind. Something wasn’t right but it seemed distant. Surreal.

Then, slowly, one thing shifted into focus. Whatever the emergency, I shouldn’t have been left so long.

I shouldn’t have been waking up alone. The ship triggered all the pods to begin defrost when we made landfall on New Earth, but someone should have been up before me. Something should have been opening the pod for me, easing me into this new world. Command and medical were meant to be up first, then those with training to be first boots on the ground. The other science staff and I were way down the list of priorities.

Still, they’d planned for this kind of thing. I’d been trained for this. I jerked my hand out, unhappy at how erratically and clumsily it moved. Maybe it was just too soon. Maybe I should just stay in my pod.

But why the alarm? Why hadn’t anyone shut off the alarm?

Eventually, my numb and twisted fingers found the emergency release. It was a task to get them to curl around the handle, but I did, and I pulled.

There was a popping, a release, then a slightly raising of the lid above me. I reached up and shoved at it. It moved easily, sliding like it’d been closed yesterday. Of course it did, no air in space. No corrosion. But it also meant I couldn’t have been on the planet for long either, as our best guess was that New Earth had breathable air.

If it didn’t, we were all doomed anyway.

The fluid began to leak out of the cracks and I shoved at the lid again, opening it more. The movement sent jolts of pain through my limbs, the worst cramps I’d ever experienced. Of course, it did, since they hadn’t moved in a hundred years.

The liquid drained out, down. Far enough to expose my face. At least the air was warmer than the liquid. I lay still, trying to flex my hands, my feet to encourage movement back into disused muscle.

As soon as I felt I’d be able to do it without hurting myself, I reached up and grabbed the mask from my face and pulled it away. I’m not afraid to say, as much as I’m a gentleman, the first word out of my mouth was a swear word aimed at the weird stabbing pains throughout my body.

Once I’d moved the mask away and the tubes out of my nose, I sat up. This was another exercise in agony and it took far too long. It’ll be easy and painless, my ass. I knew we were being lied to all along.

When my airway was clean, I did the one thing I’d been longing to do since I woke. I screamed. Help, over and over again. Help. I’m not saying my poor, abused body screamed it loudly, but I screamed it nonetheless. Nobody came.

Somehow, I pulled myself out of the pod naked and dripping fluid. I grabbed the side of the pod and tried to force myself to my feet, but they fell out from under me, sending me crashing to the floor I tried again and didn’t even make it to my knees.

The pain was too much, and it was crowding in again making me dizzy and foggy.

The alarm was still sounding. I groaned, rolled onto my side. I could roll, at least. I curled my arms protectively around my head, pressed my hands over my eyes and gave myself the protection of darkness.

I was cold, trembling as I lay there on the floor. I was sure someone should have been by now. Someone else in the room should be awake, at least. Something was obviously very wrong. Maybe their pods had malfunctioned and right now they were all trying to get out. Maybe, by some twist of fate, I’d been the only one who’d been able to free myself.

I crawled down to the bottom of the pod, using a hand on its side to guide me. When I got there, I stopped for a second and let myself breathe. It was hard to concentrate, with the alarm still yelling. I risked cracking an eyelid, but the light was almost instantly too much, my eyes too unused to any brightness. I flailed around the pod until my fingers closed on the soft cotton of my clothing, then I pulled it down onto me. A T-shirt, maybe? I draped it over my head and there, in the muted light, I managed to open my eyes.

I lay there for what felt like forever, aching and blinking against the light, but gradually my eyes adjusted. Eventually, I could lift the T-shirt out of my way and look around. Everything was still too much. My head was pounding, and my stomach was feeling more and more tender by the second.

From this angle, I could see that all the other pods were still sealed. Seven of them in this room.

I forced myself onto my knees, and my traitorous stomach did what I’d thought it might and left me heaving on the floor. Obviously, I hadn’t eaten anything, so I just spit up bile and ached, my muscles cramping with the effort of retching.

Honestly, at that point, I could have curled up on the floor and just stayed there. The last thing I wanted to do was to move. But the other pods were there right in my line of sight. Closed. Eileen, my best friend, was in her own pod in another room. She might have been trapped. Anything could have happened to her. It was glaringly obvious something was wrong, and I had to be the one to help.

I crawled across the floor to the first pod and pushed myself up to see the panel mounted on the front, the one monitoring vital signs. I hit the button to activate it.

It lit up, flashed for a second, then settled to show nothing. No heartbeat. No breathing. Nothing. Emmalynn Spark enjoys writing, fairytales, reading, cakes and ice hockey, not necessarily in that order. She is currently studying for an MA in creative writing.