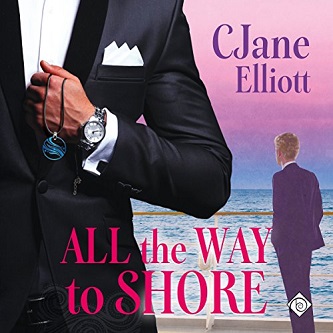 Title: All the Way to Shore

Series: Stories from the Shore 01

Blurb: Jonathan Vallen has never felt good enough. A gentle musician who loves to garden, he’s woe-fully unsuited to running Vallen Industries, the family business. When his father hires a hotshot executive, Marco Pellegrini, to save the company, Jonathan moves away and leaves his humilia-tion behind. A year later and 40 pounds lighter, Jonathan runs into Marco on an LGBT cruise. Marco doesn’t recognize him, the sparks fly, and Jonathan pretends to be someone else for the week – Jonah Rutledge – someone good enough to be loved.

Marco Pellegrini has always been driven. He rose from poverty to the pinnacle of business suc-cess, and he’ll do anything to protect his reputation – including hiding his bisexuality. Having saved Vallen Industries, he’s weary of the rat race and ready for a more meaningful life. When Marco meets his soul mate for that new life – Jonah Rutledge – on an LGBT cruise, he prepares to stop hiding and start living.

Back on land, the romance crashes when Marco discovers his perfect man is not only a lie but the son of his boss, Frederick Vallen. Jonathan resolves to win Marco back, but Frederick takes vengeful action. Jonathan and Marco must battle their own fears as well as Frederick’s chal-lenge to get to the future that awaits them on the horizon.

Review: All the Way to Shore is the first book in CJane Elliot’s series Stories from the Shore. CJane Elliot is a totally new author to me, so I had no idea what to expect. Likewise, Tim McKiernan is a totally new narrator for me. It felt as though I went into this audio book double blind.

Jonathan Vallen is a man drowning in career that has been forced upon him after the death of his beloved brother. Jonathan is a sweet musician who is too gentle for the corporate world. So when his father brings in a man to take over and get the company back into profit, Jonathan decides that he has be true to himself. He doesn’t have a whole lot of confidence but he knows what he likes and he knows what he’s good at. He leaves his life behind, moves to Florida and reinvents himself, with his cousin as his main point of contact with the world. He’s happy enough but a couple years down the track the same cousin convinces Jonathan to go on a gay cruise. This is where he sees Marco Pellegrini, the man who took over at his family’s company.

Marco Pellegrini isn’t totally happy with life as he wraps up his current job. Jonathan Vallen isn’t on his radar since the man had fled so soon after Marco had arrived. So when he and his very straight sister get away on a gay cruise he doesn’t realise the guy he meets is the transformed Jonathan Vallen. Especially after the man he meets is introduced to him by the man’s cousin as Jonah.

The two men have a whirlwind affair but everything changes as soon as they get home and the unwitting deception is revealed. Now the men have to sort out their feelings and deal with the fall out from Jonathan’s family. Jonathan fell in love and he isn’t about to give up without a fight – he is a changed man and its because of him that things can change.

This was a great audio experience with an enjoyable story. The only thing I really wasn’t into was the whole flashback (well, flash forwards, really) used to set up the start of each section of the book. It’s a personal preference thing I suppose, but it’s one of those things where I felt that the storm of emotions that happen throughout the story is lessened by telling the reader what has happened. I feel that knowing what happened meant that the impact as we went back to when the events unfolded took away from the journey that the characters went on through the chapters.

Despite this, I do look forward to the second book, especially since after being one of the heroes of this story, Jonathan’s cousin gets his own HEA.