Hi peeps! We have Chris T. Kat visiting today with her upcoming awesome, unique, shifter release Alpha Unit One, New York, we have a brilliant guest post from Chris and a great excerpt so check out the post and enjoy! ❤ ~Pixie~ 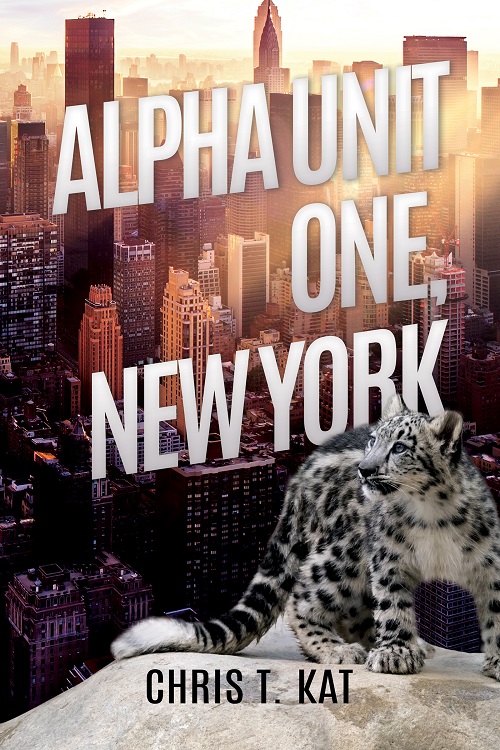 In a world that accepts shifters as normal and thinks nothing of human/shifter couples, baby shifters and small shifters are treated as subpar. They are not allowed into the more dangerous professions, and their mates have legal control over what they can and cannot do.

Nicholas Reed is about to challenge the established rules. At twenty-eight, Nick has just been accepted into New York’s Alpha Unit One—an elite law enforcement team, composed equally of humans and shifters, that specializes in drug crimes. It is Nick’s dream job. But if they find out what he’s hiding, his career could be destroyed.

Enter a huge complication in the form of Sam Black, an older lion shifter who is the leader of the unit… and Nick’s mate. Nick wants Sam, and he wants to keep his job, but he can’t have them both. He also can’t choose between them.

Romance or no romance?

Thanks so much to MM Good Book Reviews for having me on their blog. Dreamspinner Press will release my new shapeshifter novella Alpha Unit One, New York on July 27th.

Like all my books, Alpha Unit One, New York is a romance at heart, which is actually weird because as a teenager I honestly despised romance stories. They were too kitschy, too cliché, too everything for me. I was never able to relate to any of the characters, and either the women acted like damsels in distress or the men came across as totally overbearing. Of course there was also the fact that even as a teenager I wanted to read stories with two guys in a relationship. I have no idea why I was so fixed on that point, but it was what it was.

When I was younger, I only read suspense stories, horror, supernatural stories, etc. but gave romance stories a wide berth. In my early twenties, I discovered the author Sandra Brown because her book blurbs intrigued me. Color me surprised when I realized they were actually romance stories. At first I was a bit put out, but for some reason I began to like the romance part. I still preferred stories without romances, but I didn’t forgo them completely anymore.

About ten to fifteen years ago, I discovered the world of manga. Man, was I happy when there were books with two men in relationships! From there on I discovered the world of m/m fan fiction and later on m/m original works. Since then, I fell in love with the romance part. Actually, I love it so much that now it’s a struggle to pick up books without any romance in it. Weird how preferences can change, right?

How is it for you? Have you always read romances or did you discover them later on in life? Annoyed at my jumbled thoughts and ramblings, I tried to push everything aside and knocked at the door. A deep rumble called out, “Come in!”

For a second, my bravado faltered. What if they found out who I really was? All my hard work would be for nothing, then. No matter how good I was at my job, they’d kick me out before I could utter a single word. Guys like me weren’t supposed to become cops.

I pushed the door handle and walked inside, catching glimpses of a handful of people—mostly large people. That’s how it always was. Everyone had to be taller, bigger, meaner than me. It was like a law or something.

Oh boy, and there I went again with the rambling.

Seven pairs of eyes stared at me, waiting, assessing. After clearing my throat, I gave a small wave with the hand that still clutched the envelope.

“Hi,” I said. My voice came out soft and tentative. Screw that!

A guy with short black hair, tinged with a few silver strands at his temples, unfolded from a chair. My nose informed me this was the guy who’d jostled me only a minute or so earlier.

Fuck, fuck, fuck! My boss was a lion shifter.

Okay, I could still do this. No stepping back, even though my inner voice screamed at me to leg it. How could I be so stupid as to want to associate with one of his kind?

Black strode toward me—or maybe I should say he swaggered—oozing self-confidence and… intoxicating pheromones. He smiled as he stretched out his hand. For a second, I got lost in his hazel eyes. All my defenses lowered at once. I wanted to rub my cheek against his in the worst way while my inner voice shrieked, filled with too many emotions for me to accurately compute.

I blinked, which effectively cleared my head. Bastard!

I knew what he was doing. He was checking to see if I’d fall for his pheromones and react so he could determine whether I was a shifter instead of a human. I ignored his hand, still held out there waiting for the obligatory shake, and sneered. “What? No conviction in the system?”

He dropped his hand and scowled. “Last guy who reeked of cologne as much as you do was no human. He fooled everyone, and he put the team in jeopardy.”

“So the guy was a shifter. What’s your problem with that?”

“Guy was a goddamn sheep, that’s my problem. First sign of trouble, he ran.” My new boss frowned suddenly. “How’d you pick up on what I was doing?”

Shit. That tiny inner voice yelled something unintelligible at me, but I’ve had years of practice ignoring it. “You sniffed the air, and let me tell you, it wasn’t subtle.”

A lanky man on my right threw a ballpoint pen onto his desk, laughing. “He’s got you there, Sam. Regarding your question about the shifter—that’s just how we roll here, kid. We don’t work with sheep or small shifters. They’re not dependable.”

“Then it’s your lucky day, since I’m simply human,” I stated, wishing I’d stop sweating so much.

Black circled me before his meaty hand landed on my neck. I stood stock-still as he swept my hair aside and whispered, “Then you won’t have a problem with me taking a whiff, right? You know, just to make sure you’re not another one of those lying idiots who could cost my team their lives.”

“Does that mean you’ve had trouble with imposters regularly?” I asked, curious even as a shiver crept down my spine. A huge beast sniffing at me tended to put the fear of God into me.

I had a pretty good idea what he’d do with me if he found out. “You’re sniffing at my neck, dude. Either you want to fuck me or bite me. Neither option sounds incredibly appealing.”

Chris T. Kat stumbled upon the M/M genre by luck and was swiftly drawn into it. She divides her time between teaching, taking care of her family, reading, and sometimes writing. She enjoys a variety of genres, such as romance, paranormal, and suspense. She also buys way too many fabrics and spends a ridiculous amount of time behind her sewing machine.