Hi guys, we have C.C. Bridges stopping by today with her brilliant upcoming release Angels Rising, we have a great excerpt and a brilliant giveaway where 4 lucky readers can win a $10 Dreamspinner credit each, so guys, check out the post and enter the giveaway! ❤ ~Pixie~ 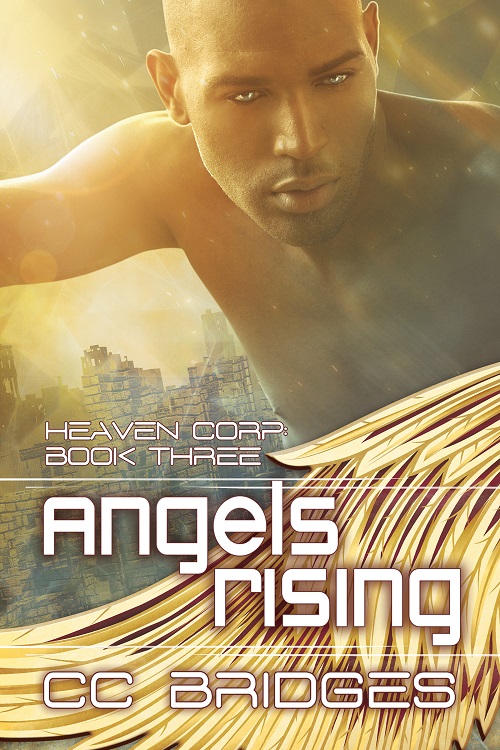 Better to reign in hell….

Uriel 3019 has been a cybernetically altered angel since he volunteered for the program fifteen years ago. His devotion to the floating city of Heaven is fierce, and he’ll follow any command he’s given. But Uriel’s orderly world is crumbling. Angels are going mad, even hurting people. Some are rebelling, and the noble families are vying for control—by any means necessary.

Uriel’s latest assignment brings him into a secret society, where his partner, Raphael, is working for freedom and equality for all angels. Could their group be responsible for the angels’ recent erratic behavior? Uriel is determined to find out—and report on his findings. But he doesn’t count on Raphael’s confession—that he has feelings for Uriel—or the memories slowly starting to return from the time before he became an angel.

Is he on the right side? Does he dare to stand against Heaven, even if doing so will save his fellow angels from becoming soulless automatons? Uriel has to decide if his loyalty belongs to his superiors… or to the angel who’s stolen his heart.

I’m so excited to be here at MM Good Book reviews to kick off the blog tour for Angels Rising! Thank you so much for having me.

Angels Rising is the third book in the Heaven Corp series. It completes the story arc started in Angel 1089. Unlike the other two books, which can stand alone, it’s better if you read at least one other book in the series in order to get the full impact.

In Angel 1089, we meet Gabriel 1089, and his actions at the end of the book directly lead into the events of Angels Rising.

In Exodus, we see why Hank and Ian left Heaven, and learn about the corruption at the heart of the city.

Now, in Angels Rising, we learn the story of Uriel and Raphael. They both showed up in Exodus, but now they get their chance to shine. Uriel, in a former life, used to be known as Ty. He and Ian were lovers. But after becoming an angel, he betrayed Ian in the worst way.

Uriel and Raphael have been partners their entire career as angels, enforcing the rigid morality laws that only apply to the lower classes of heaven. But something has changed about Raphael…and it has something to do with Gabriel 1089’s last communication with Heaven.

I hope you enjoy the book! In celebration, I’m offering 4 $10 Dreamspinner gift certificates at the end of the tour.

TIME TO put this angel out of his misery.

Uriel closed his metal wings as he ducked under a glistening support beam, moments before his head would have collided with the metal. Wind buffeted his body as he captured the air again, snapping his wings open. He darted around pillars and beneath passenger walkways, moving faster than any civilian transport. His target flew ahead with wings that beat off-rhythm, like the glitching angel didn’t know how to use them.

The words sounded in his ears instead of appearing directly in his mind. Uriel still had not grown accustomed to this way of communicating. But since the Angel Network had been shut down, it was all that was left to them. He missed the clarity of before, when he didn’t have to think about transmitting messages to his partner. No, before all thoughts had been shared. Truth be told, the connection between every angel had run soul deep. Despite being separate beings, they were also one.

Now their halos plugged into Heaven’s network, acting like the net connections every civilian wore plugged into the ports behind their ears.

The glitching angel staggered, his wings drooping as if unable to hold him up. He dropped onto a platform with a graceless move so unlike what an angel should be, tumbling onto his hands and knees like a child.

“A level below you.” Uriel lost precious time to send his coordinates. Raphael could no longer simply find him by feel—sensing Uriel’s place within the network. “I’ve got him cornered behind a support pylon.”

Silence for a moment, then: “Wait for me. It’s too dangerous to take him alone.”

How dangerous could this poor lost angel be? The glitch made Saphiel 1634 confused. He shivered on the platform, holding on to one of the support beams that connected to the pylon. Little remained of the powerful angel Saphiel had been. Better to die in battle than go out like this.

Uriel held his position, hovering out of Saphiel’s sight, his powerful wings keeping him in the air. Raphael swooped in from above, making no attempt to hide his entrance, and alighted a few feet in front of Saphiel.

Apparently Raphael didn’t care about his own safety.

“It’s okay.” Raphael held out a hand. “Where do you think you are?”

Saphiel blinked at Raphael. “Whoa, look at you.”

What was Raphael doing? Talking to those affected did nothing. The glitch ripped apart their rational senses, making them see things that weren’t there. Even now, Saphiel didn’t appear to know Raphael, and he should.

Then it clicked. Of course—Raphael was keeping the glitching angel distracted. They’d played this game before, one of them cornering a suspect while the other flew in from behind. Only, of course, without the smoothness of the Angel Network, Raphael couldn’t waste the time to tell Uriel that. He must assume Uriel knew to play his part.

Uriel moved into position, unclipping his weapon. Orders were to destroy any glitching angel. Something held his hand. To kill Saphiel like this, like an animal being put down, felt wrong. Uriel was accustomed to battle, not this farce of mercy killing.

Still. He had his orders.

Uriel flicked the button on the handle of his staff weapon, extending it to full length before firing off a blast at Saphiel. It hit him square in the chest, sending him flying backward and over the edge of the platform. Raphael shouted something and took off after the falling angel.

Uriel followed a few moments behind, in time to see Raphael gently set Saphiel down in a much narrower space. He hovered, unable to get too close underneath this intersection of brackets and bracing.

“I didn’t expect him to fall off the ledge.”

“He was too close.” Raphael worked briskly, removing the halo from Saphiel’s forehead. He pulled a slim disk out of the pouch strapped to his belt and placed it over Saphiel’s chest. “Your shot did the trick. He’s dead.”

Those words, spoken in such a flat tone, hit Uriel like a blast to his own chest. He gripped his weapon tighter before disengaging it and clipping it back onto his belt. Perhaps if he didn’t hold the thing that killed one of his own, he wouldn’t feel out of sorts. A hitch rose in his lungs, and Uriel couldn’t understand it. What had made him nearly pull his shot at the last moment?

“It shouldn’t be easy to kill another angel.”

That had to be what disturbed him so much. These creatures had become helpless after the glitch. They needed to be put down. But that didn’t mean Uriel could forget they were once his brothers.

Raphael engaged the forcefield generator and blanketed Saphiel in an opaque gray cover. No one would be gawking at the fallen. He stood and handed Uriel the slightly bent halo, no longer a gleaming gold, but tarnished and dull.

“No, it shouldn’t. I’ll take the body to the recycler.”

Uriel stared at him. They often split up during missions, and yes, it would be far more efficient to do it this way. But why did he have the sense that Raphael wanted to hurry away? Uriel met Raphael’s amber eyes, the boldness of the color bright against his fair skin.

Raphael broke the gaze. He bit his lip and looked away. “I’ll see you at the barracks.”

Uriel stretched out his golden wings and took to the air. He had a broken halo to deliver.

CC Bridges is a mild-mannered librarian by day, but by night she writes about worlds of adventure and romance. When she’s not busy solving puzzles in an escape room, she can be found diving into comics or binge-watching superhero movies. She writes surrounded by books, spare computing equipment, a fluffy dog, and a long-suffering husband in the state of New Jersey. In 2011, she won a Rainbow Award for best gay sci-fi/futuristic novel.