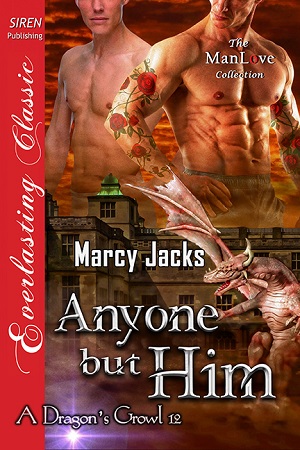 Title: Anyone But Him

Blurb: Warren, a half breed vampire assassin, has just been taken down by a dragon much bigger, stronger, and badder than he could ever be. And that dragon is his mate. A mate who is incredibly unhappy to have him, and lets Warren know it.

Lasius, second hand of his former alpha, is pissed. A vampire? Really? The world saddled him with a vampire for a mate. Worse, this isn’t some innocent vampire, he’s as evil and blood sucking as they come, and Warren is lucky Lasius didn’t kill him on sight.

But is Warren really so evil? Warren’s seemed to be stubbornly hiding something since the moment Lasius found him, and as much as Lasius doesn’t want to acknowledge the mating pull between them, he won’t allow anyone in his clan to harm his mate either.

A sudden pregnancy and discovering his little assassin might be related to someone in the clan could change up everything for the better or the worse.

Review: I felt disconnected with Lasius in this story. I understood he was angry at who his mate was but felt the way he treated him was despicable and showed he did not care in the least.

Warren on the other hand seemed so lost at times. Though his secret was certainly not expected it made the story more enjoyable to me.

Mystery and a lot of drama are in abundance but well worth the read. Good addition to the series.