Hi guys, we have Elvira Bell popping in today with her new release Astray. we have a great excerpt and a brilliant giveaway so check out the post and enter the giveaway! ❤ ~Pixie~ 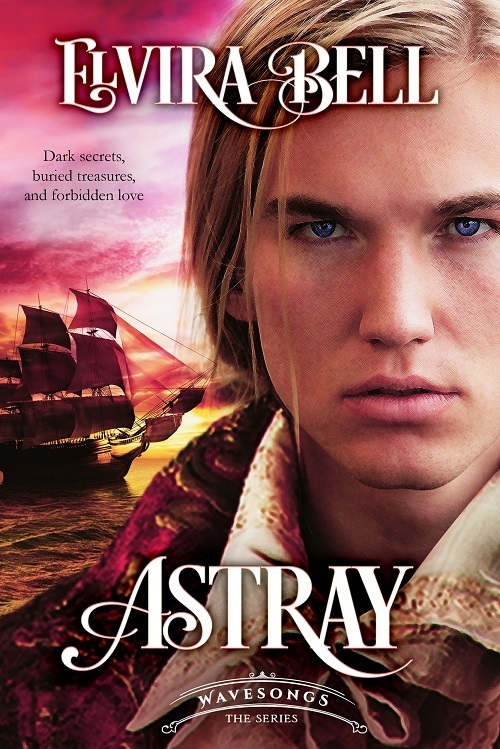 Nick enters the cabin to find Hart sitting at the table. A book is open in front of him. Red-tinted sunlight floods the windows, casting a burnt orange glow over his hair and coat. He doesn’t look up as Nick steps inside and closes the door behind him.

Hart sighs. Gives Nick a brief glance. “Ah, yes. My boots need a cleaning. Over there.” He points to the boots, neatly placed next to the door. “You should find what you need in that chest opposite them.”

Nick glances at the clogs on his own feet. Hart has not just one pair of footwear, but two—on his feet instead of the jackboots are black leather shoes. Sinking down to his knees, Nick gets to work. He grabs one of the boots, reaching for the cloth he’s found. His stomach clenches. All he can think of is that pool of blood around Stubbs’ head. He worries that Hart’s soles will be red, stained with the cabin boy’s blood. Thankfully, they aren’t. In fact, there’s not a trace of blood on them—almost as if they have been cleaned before.

Nick glances over to Hart. Did he clean his own boots before calling Nick in here? And if so, why? It makes no sense that he has wiped away the blood himself, when he could have made Nick do it.

Hart sighs and scribbles in the book. It’s unnerving to be alone with him and Nick feels relief surge through him when both boots are spotless and shiny.

“All done, sir.” He puts the boots back by the wall and stands up, turning to face Hart again.

The Captain doesn’t look at him. “Thank you.” Outside the window, the glowing sun has turned to just a sliver on the horizon. “That will be all.”