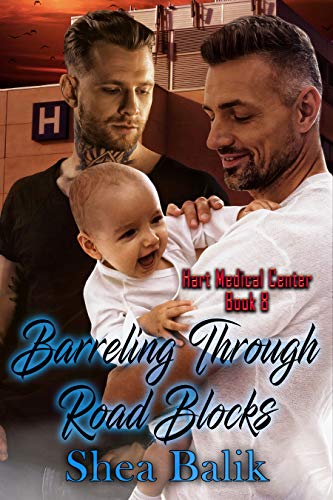 Blurb: The moment Soren Larsen first saw Cillian he knew they were meant to be together. Convincing Cillian would be tough, but Soren was willing to put in the work to woo him. That was assuming the stalker didn’t kill Cillian first.

Cillian Driscoll had never thought too much about love. His career working in the emergency room as a physician’s assistant was too important to him to worry about the future. Then he got his first threat from the hospital’s stalker. He might have thought he was too independent to need an Alpha, but being in Soren’s arms was the only place he felt safe.

The stalker’s plan to kill the Omegas of Hart’s Medical Center is cunning. No one is safe. But the stalker’s victims and their husbands refuse to give up hope.

Can love really conquer all? Soren and Cillian will test that theory as they try to stop the stalker before it’s too late.

Author’s Note: This is the last book in the Hart Medical Center Series.

Review: The stalker steps up their plans in this suspense filled story with mutiple attacks and some deaths. Cillian is on the stalkers radar and the chief of police Soren takes it upon himself to keep the man safe. But with the stalker still out there and unknown is anyone safe?

Oh my god this story was amazing. I was wrong in my guesses about who the stalker was. But I’m glad they finally found out who it was. My mind was blown by how many people helped this person in their revenge plans. I was disgusted with all who were involved with them.

Cillian and Soren were a delight to read about. I was intrigued by Soren’s family background as well as his fierce determination to keep Cillian safe. I’m really sad to see the series end as it was so good following the investigation and the clues.

I highly recommend the entire series.