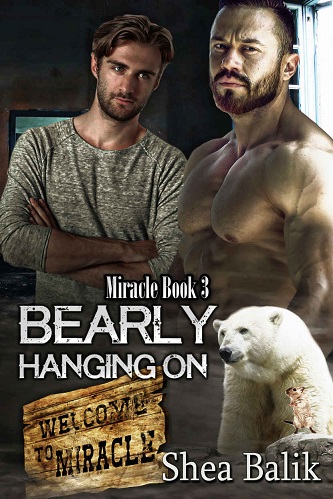 Kirill had been moving from town to town most of his life, staying one step ahead of those bent on destroying his kind. Along the way, he’s somehow managed to become Alpha to a group of shifters also on the run. But he was tired of always having to pick up and move when all he wanted was a place to call home.

Harper had never known a moment of peace. Even as a child his father had pitted his own brother, Abdiel, against him for his own amusement. When his father died, Harper had hoped things would change. He should have known better than to believe that change would be for the better.

The two men embark on a journey of discovery about themselves and the love they potentially share for each other. Can they get beyond their pasts, or will they be doomed to be separated for all eternity?

Review: Each book in the Miracle’s collection features a new romantic couple. To enjoy the overall story arc and crossover characters, I would recommend reading the series in sequential order.

Harper’s brother was one hell of an asshat. He was as nasty as they came and got his just rewards in the end. However the one that took over where his brother had left was just as cruel. He was given to the guards to be raped and beaten every single day. And every single day he wanted to die.

In this world, to be gay was a death sentence. That is why Kirill always kept on the move. That is until he got tired and decided to stop running. He came into Miracle with his little group and decided that was going to be home. It also meant he was to be alpha. Going to save someone should have been simple, but when that man is his mate all bets are off. For more read the story.

Now this is a pretty cool story but it also is a bit confusing. It switches from Harper yelling at Kirill or one of the others, to the next step in the book. Like I said a bit confusing but hey the story still rocked. I am not sure if it will become a favorite series of mine but it could be right up there soon. For now it is lacking something important to make it really stand out, but I have high hopes for this author and her stories.