Hi guys, we have L.A. Witt popping in today with the tour for Before There Were Three: Ethan & Rhett, we have a great excerpt and a brilliant giveaway so check out the post and enjoy! ❤ ~Pixie~ 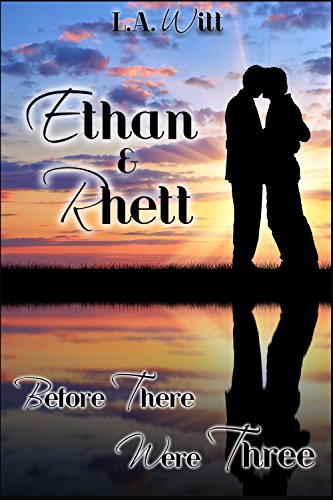 Before There Were Three: Ethan & Rhett

(The Distance Between Us 0.5)
Narratored by Charlie David
by

Seattle, 2000 – Ethan Mallory is counting down the days until he moves back to Toronto. He loves Seattle, but it’s time to go home.

So it’s just his luck that, with a month to go, he meets Rhett Solomon. Their chemistry is off the charts, and in bed, Rhett is everything Ethan’s been craving. He’s witty and charming outside the bedroom too.

Ethan’s not about to change his plans for a man he’s just met, but what could this become if they had a little more time? Is this just a sizzling hot last hurrah before he returns to Canada? Or is leaving Rhett behind a huge mistake? 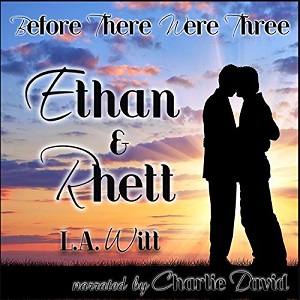 The clock between the top shelf rows of bourbon and vodka said it was five minutes after nine. My watch said four after, but quibbling over a minute in either direction was pointless. Jay was supposed to be here at seven-thirty. No call. No show.

Bottom line? Whichever timepiece had it right, I was getting stood up.

I threw back the last of my screwdriver and pushed the glass away. Well, that was a wasted Friday night. Question was, what to do with what was left of it? Get wasted? Or hit up one of the clubs and see if I could find someone to fill Jay’s role for the night?

That thought nearly made me groan. I was sick of the club scene. That was why I’d decided to try this whole meeting-guys-online thing in the first place. Everyone said the Internet was crawling with psychos, but so far, my luck had been decent. Connecting with someone, chatting a little, making sure we both knew what we wanted—no commitment beyond maybe a morning after cup of coffee—and then meeting up in a public place. If there was chemistry, decent hygiene, and no symptoms of being a serial killer, going to whoever’s place was closest and fucking each other into the mattress. Simple.

The online thing was a gamble, but it was so much more efficient and to the point than meeting someone in a club. Clubs were all right, but sometimes I wanted a sure thing. Something better than trying to exchange basic information like first names over loud music, hoping the other guy wasn’t thinking about soulmates and co-signed leases, and then having a frantic trial run in a men’s room or a vehicle before… well… going to whoever’s place was closest and fucking each other into the mattress.

I was sometimes tempted to tell a guy to just meet me at my apartment. Skip all this bullshit and forget pretending we’d met up for anything we could do in polite company. But meeting people on the web was risky, and I was much more comfortable feeling someone out in person before I took them back to my place. It also helped to make sure there was some actual chemistry, and that there was attraction. If we didn’t click enough to make it work, bowing out of a bar was much easier than kicking someone out of my house.

But it was all a moot point if the guy didn’t even bother to show up.

I muttered a few curses to myself. I really needed to get out of here and find something—or someone—else to do. Since the efficient and to the point technique hadn’t worked out tonight, though, there was always the fallback. Seattle’s Capitol Hill had a number of gay clubs. Tedious, but it wasn’t like I had anything else going on tonight.

It was still early, though—seven or eight after nine, depending on which clock I asked—so there was no point in hustling out of here. Most places didn’t really wake up until after ten.

So I flagged down the bartender and asked for an iced tea, then folded my arms on the bar and gazed down at the dining room. This was one of those bar and grill places with a semi-swanky bar up on a mezzanine overlooking a linen tablecloth restaurant. The food smelled amazing as always. I’d heard they made a hell of a steak here. Small wonder this was the go-to place for those on the dating scene. Most nights, the clientele was pretty evenly split between straight and gay couples, and tonight was no exception.

I had no interest in a relationship right now—especially not when I was packing up and leaving Seattle in a few weeks—but admittedly, I was a little envious of some of these people. I’d been more or less alone since I’d moved here two years ago. Most of the time, I was happy with that as long as I was getting laid on a regular basis. Sometimes, though, I missed being with someone like that. Talking over dinner, maybe sharing a bottle of wine, or kicking back in front of a movie and maybe falling asleep before the credits started rolling.

Someday. Maybe. For the rest of my time in Seattle, though, my goal was someone to keep my bed warm at night and be gone before noon. Unless the sex was really hot. Then he could stick around long enough for us to fuck a few more times. But definitely gone before noon the next day. Once a one night stand turned into two, things could get—

Oh, what have we here?

A face in the dining room caught my eye, and my drink almost slipped out of my hand. Whoa. I’d never seen him before, but I sure saw him now, and he was sure easy on the eyes. Built like he knew what a gym was. Neatly cut sandy blond hair. A dusting of five o’clock shadow along a sharp jaw line. Eyes that, even from across the restaurant, shrank my vocabulary to expletives and racy suggestions.

Pity he was here on what appeared to be a date with someone.

On the other hand, he looked like he was enjoying his date the way most people enjoyed standing in line at the DMV. He leaned against the back of his chair, as if to put as much distance between him and his date as he could. His expression alternated between neutral-edging-toward-boredom to outright uncomfortable.

The guy sitting across from him didn’t seem to notice or care. He gestured animatedly, sometimes with his highball, and whenever he laughed, his date squirmed a little more. At one point, the guy with his back to me shook his head, apparently laughing, and his date grimaced behind his own drink before downing most of the contents in one swallow.

Just before he lowered the glass, his eyes flicked up and met mine. I jerked my gaze away, cheeks burning as I realized I’d been staring. But then I glanced his way again. He stared right back. His forehead creased, and his face said nothing if not Help?

I raised my eyebrows. What do you want me to do?

That was weird. I’d probably just imagined it, but I swore there’d been a momentary connection. A telepathic exchange, or at least an attempt at one. And the guy did seem pretty miserable. What exactly was a stranger going to do about it, though? I wasn’t even much of a wingman for my friends—what was I supposed to do here?

The guy said something to his date, gestured at his empty glass, and got up.

And dear God, he strode right across the dining room and up the stairs to the mezzanine where I was sitting. The bar was almost entirely deserted except for myself and a couple at the other end, so he could’ve stood anywhere, but he stopped right beside me. He flagged down the bartender and asked for a couple of beers. While he waited, he didn’t look at me.

“Waiting for someone?” he asked.

This time he glanced my way, arching an eyebrow.

I shrugged. “Everyone gets stood up sometimes, right?”

He laughed dryly. Before he could say anything, though, the bartender handed him his two drinks.

The guy paid, but didn’t collect his drinks right away. Instead, he asked for a pen, then wrote something on the back of a coaster and slid it toward me. Without a word or even another glance, he took his drinks and headed back down to the dining room.

I turned over the coaster. On it, there was a phone number, and below that:

My heart skipped. I glanced his way again. He was back at his table, casually sipping his drink and listening to whatever his date had to say. His eyes flicked toward me, but his expression offered nothing.

I had almost no signal in the bar, so I paid my small tab and stepped outside. I was getting low on minutes, but curiosity trumped any concern I had about overage fees, so I entered the number and hit Send.

After two rings, he answered. “This is Rhett.”

“Shit, are you serious?” He paused and exhaled. “And you couldn’t call—fine. Fine.”

I suppressed a laugh. God knew what story he was going to feed his date, but he deserved an Oscar for sounding legitimately annoyed and concerned.

And then he hung up.

I stared at my phone for a moment. This definitely wasn’t how I’d expected my evening to play out, and where it went from here, I had no idea. But meeting up with a stranger who I’d just bailed out of a bad date seemed like a better direction than moping about my own failed date before searching for some anonymous sex at a club. It was a more interesting turn of events, that was for sure.

With no idea what to expect, I walked over to After Hourz, sat down at the bar, and waited. 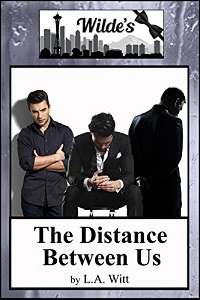 The Distance Between Us book 01! One thought on “Before There Were Three: Ethan & Rhett by L.A. Witt Audio Blog Tour, Excerpt & Giveaway!”