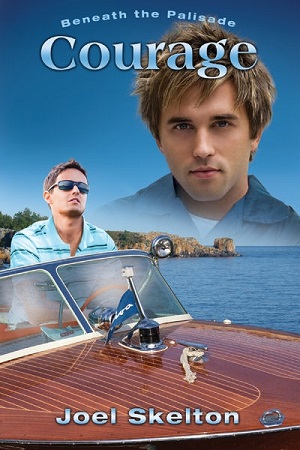 Series: Beneath the Palisade 02

Blurb: Theodore Engdahl’s sexual identity crisis clashes with his faith. Raised to believe homosexuality is a sin, Theo finds himself on the ropes with his girlfriend as well as his straight coworker, whom he can’t stop staring at. Luckily, before he can panic too much, Theo discovers the support system provided by the Men’s Center.

At the center, he meets Alex, and the two hit it off. Unlike Theo, Alex wears his sexuality like a favorite shirt. Alex is also easy on the eyes, but for Theo, following his example is anything but uncomplicated.

With a little help from Alex and his mentors, Ian and Harper, Theo realizes that living well requires courage. While he struggles to take the next step with Alex and to come out to his conservative parents, life beneath the palisade goes on. But when Alex and his boat disappear during a terrible storm, Theo must find the strength to hope

Review: Courage is the second book in Joel Skelton’s series Beneath the Palisade. While the main story is based around different romantic couples, it is best to read this series in order.

As soon as I finished book 1, Reliance, I had to start Courage. I had thoroughly enjoyed the first book so much I wanted to know where the set up that was given there would lead to in the next book. Ian and Harper from Reliance are back, offering fatherly advice and basically wanting to make the world a better place. However, this is really Alex’s story, who was introduced as Ian and Harper’s protégé who they had started to think of as almost like a son. (It’s all very sweet).

Wherein the first book there was the main story of Ian and Harper, then we were randomly introduced to Alex and it took a while to realise that he was going to be important – it does happen here in Courage, though it is far less confusing as the story opens up quickly. While Alex and Theo’s relationship is front and centre, as well the important subplot of Theo coming to terms with his sexuality and coming out to his highly religious parents, there are plenty of other couples we hear directly from. However, I can’t help but think that much like Reliance, the main romantic story line is rather thin in terms of plot and it is everything that is happening in Alex and Theo’s immediate surrounds that propels the story forward.

The story for the most part is set at the Palisade B&B which Ian and Harper had opened by the end of book 1. However, Harper and Alex’s plan to help the local men by opening a men’s centre has also been realised, which is where Alex meets Theo for the first time.

Occasionally, Ian and Harper pop up, mostly as a guide and bringing together all the parts of the story, especially when it comes to Alex. Then we meet Petra, a lesbian who works at the Palisade who finds love with Betsy when she checks in on day. Then the more important story line is that of older couple Harold and Quentin. It is an absolutely beautiful story and might well make you cry (I will admit, I did cry when they popped up). Their function as characters, I think, is to be something of a role model to Alex, adding on from all the positives he has learnt from being with Ian and Harper.

Overall, this is a really sweet love story. I love Alex – he is strong in that he is a great support to Theo and not about to push the bounds of the start of their relationship. Theo is sweet and cute, though he is also strong in his own way. Both these guys seem so real and they are just a joy to read.