Hi guys! we have S.A. Collins popping in today with the blog tour for his new release Beware Mohawks Bearing Gifts, we have a great exclusive excerpt and a brilliant $20 Amazon GC giveaway so check out the post and enter the giveaway! ❤️ ~Pixie~ 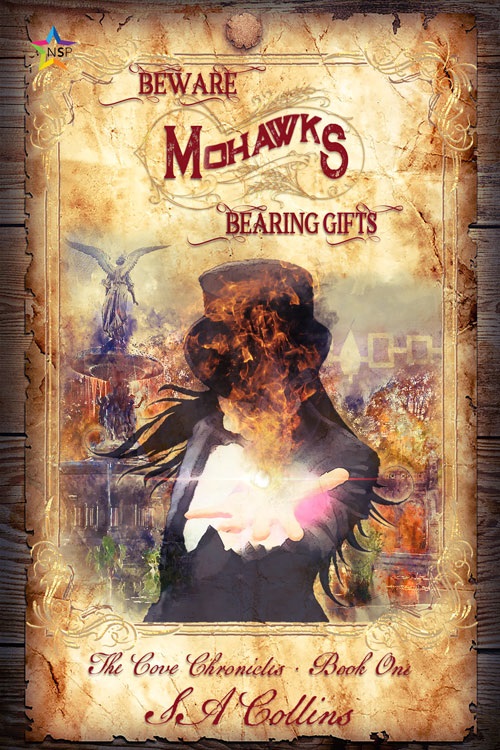 (The Cove Chronicles 01)
by

William Matthias Hallett is a fashionable dandy of the Manhattan social set. His life is laid out before him: a world of soirees, riches, and luxury. Yet all he wants to do is find an adventure so deliciously wicked that it will satiate his soul for an eternity.

Disguised in a lower-class manner, into the notorious Five Points he goes, seeking that spark of adventure. That is until it greets him in the form of his old schoolmates from Dartmouth College—a pair of Mohawk warriors who will up-end his world and all he knew it to be forever. The room fell silent. We regarded one another until the silence seemed deafening.

Finally, Joss’s smooth baritone broke into the room. “Thomas, I know this is difficult for you, but I need you to clarify something for me. You said earlier that Tessa and your cousins were swept away. What happened to them? Where were they flung? Into the forest with your uncle? Did they survive?”

The boy moved his fingernail along a well-worn groove in the tabletop, contemplating his words carefully. Indeed, his very careful contemplation disturbed me greatly, completely underscoring how his narrative all seemed slightly askew, off-balance, and not wholly the truth. Be that as it may, I felt another sore point coming to the fore.

“This is the part I do not know how to answer. When it swept through them, Tessa tried to defend them as best she could, but the creature was too fast. They got sideswiped and fell away into the darkness behind the creature. I could only watch as they seemed to fade from view, as if their bodies were torn apart upon the wind. I have no way of knowing where they went. Only that they were nowhere to be found after I sent the creature back from whence it came.”

“And where do you suppose that would be?” Jacob inquired.

“I have no idea, Uncle Jacob. I fear I’ve trapped them with the monster I sent away.”

::We are all related one way or another, Will. It is the nature of our Confederacy, you ought to remember that. Jacob’s younger brother married into Thomas’s family.::

“And what of Thor? You said he was flung into the forest. Did you ever locate him? How did he fare?”

“After I sent it away, the dark hole it used to tear into our world collapsed. When it did, it shattered several homes in the village and put everyone around me to sleep. They fell where they stood when the creature’s hold upon our world collapsed. I first checked upon my mother and she was alive, but I could not rouse her, regardless of what I tried. I spent the following hour moving amongst the brush trying to locate Uncle Thor, but I could not find him. I fear he is lost as well. I dragged those I could back into the few houses or buildings nearby as it was growing colder. I didn’t know what else to do, so I came back here.”

“Thomas, I guess we had better explain something here,” Joss offered. “You are not going crazy. All of these events are as terrifying as they are spectacular, yet they are very real. And there is a reason for it all, and why it reveals itself to you now.” It seemed to calm Thomas a bit.

Joss then looked back to Jacob who spent the next few minutes explaining the existence of the Guardianship and their common cause and how he fit into this new world that had suddenly opened up to him. Thomas had little time to assimilate this information; Jacob pressed his next point as soon as his Guardian history lesson was over.

“However, if what Thomas has said is accurate, we had better get to the Allegheny posthaste. Only then will we have a fuller understanding of what has transpired.”

As I was in my dressing robe and nightshirt, I had to ascend the stairs to gain a change of clothing. Joss had already taken the quicker route by gating back to his room and had nearly completed his transformation as we discovered him walking out into the foyer at the top of the stairs. Thomas followed me upstairs. It was clear I was not going to shake him off anytime soon.

“I will see you downstairs. Hurry, Will, as we might have quite a cleanup on our hands.”

In the bedroom, with Thomas sitting contemplatively on the bed whilst I shucked myself out of the nightshirt and into my regular clothing from earlier this evening, I could not help but feel that this all was a step backward. Yet, part of the recounting by Thomas had me confused.

“So, tell me,” I asked as I slipped my shirt over my body and tucked it within my pants. “Why me? Why not your uncle Jacob? Or Joss, for that matter?”

I came to sit next to him on the bed as I proceeded to put my right shoe onto my foot. The left was more difficult, as the bedding was still strewn about the room, which required my digging around to recover it.

He sat watching as I reseated upon the bed next to him and went about putting the other shoe on. He hopped off and assisted me.

“Whatever do you mean? You come to me out of a perceived bond of trust, and yet with the same breath you claim to withhold information because you cannot discern whether to trust me or not? Come now, Thomas. You will have to do better than that, I am afraid.”

He just sat there, squatted upon one knee, and eyed me with a rather conspiratorial air, displaying a maturity far beyond his young years.

“It’s because of him, you see,” he uttered in whispered tones as he looked about the room—as if he expected someone to be listening in. The mysterious air about him seemed to crystallize in that moment. Thomas was a boy of vast layers and complications.

“He’s what told me to trust you. He said that of them, William Hallett was the one I was to trust most, as he trusts you as well.”

“He? He who? Joss, you mean. Well, of course he—” I was duly interrupted for being so far off the mark.

“Not him”—he looked about the room as if from the darkened recesses of my bedroom someone could spring forth and catch us both unaware—“Lord Tiyanoga. I know you know of whom I speak.”

I became quite dizzy at the mention of the name. For a moment, the room spun. I had to fight to remain upright. Something seemed to stir within me. I knew who he referred to but could not place meeting such an individual.

Thomas seemed to realize I was under some sort of duress only when he touched the side of my face. The bed shook violently. We were all eclipsed from my bedroom only to reappear, bed and all, crashing onto the kitchen table, making a disaster of the furniture in a calamity of noise and broken wood. The moment we hit, Thomas sprang from the bed as if prodded by a hot poker, to stand about five feet away from my prone body.

Joss and Jacob came running to the doorway from the front receiving room after hearing the commotion.

“Will, when I said to hurry, I meant you could leave the bed upstairs,” Joss teased as his eyes twinkled at the remnants of my bedding and kitchen table.

I allowed my eyes to relocate themselves to the back of my head, it being the best I could come up with as a retort. Yet, it did beg me to recall a time when my life was so much simpler before my maternal family, adventure in hand, had decided to come calling. My furnishings probably wished I had left things well enough alone.

“We still need to hurry, Will,” Jacob added as he moved into the front room followed by a very amused Joss.

“Yes, yes. I suppose the cleanup will have to wait,” I insisted as I got up from the colossal mess and moved toward the receiving room.

Once assembled there, Joss placed a hand upon my shoulder and Thomas took his place in front of his uncle Jacob and we gated to the Seneca village along the Allegheny River. Set in an alternative Earth that deviates from our own known timeline, William Matthias Hallett, a Mohawk/British New York socialite and dandy, who wants very little to do with his upper-crust Manhattan set, sets out to the notorious Five Points, seeking an adventure so decidedly wicked to satiate him for a lifetime. He gets far more than he bargains for when he crosses paths with two Mohawk warriors from their days at Dartmouth college. Thrust into an unseen war that the Mohawks and the rest of the Haudenosuanee Confederacy has been fighting for over 600 years, William must come to terms with his maternal heritage that is pressing ever forward as their newly created sovereign nation rapidly expands, isolating the burgeoning United States along the eastern seaboard and now reaching a boiling point with the new Americans. Central to this sci-fi adventure is the creation story of the Haudenosaunee Confederacy where myth becomes reality in ways that William can scarcely imagine. SA “Baz” Collins hails from the San Francisco Bay Area where he lives with his husband and Zorro, a character of a cat. A classically trained singer/actor (under a different name), Baz knows a good yarn when he sees it.