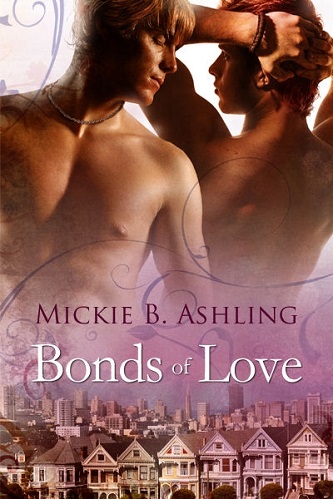 Blurb: Getting to know each other hasn’t been an easy journey for Scott Gregory and Robin “Red” Kennedy. Falling in love and exploring their kinkier sides revealed a perfect match, and Scott is a devoted sub to Red’s headstrong and often impulsive Dominant personality.

Then there’s one more threat to their relationship: Robin’s desire for a public collaring, something the shy and formerly closeted Scott is having a really hard time accepting. Is a strong and binding love―albeit a kinky one―enough to keep Scott and Robin together?

Review: Bonds of Love is the second book in Mickie B Ashling’s Bay Area Professionals series. Being new to the author’s work, I feel that I am still exploring their writing style, although I really did enjoy the first book to the series. This novel is a direct continuation from Impacted! and so it is vital that you read the first book before moving onto this one.

The story picks up Robin and Scott’s lives as a D/s couple, but also as professionals as dental hygienist and dental surgeon, respectively. They are still dealing with much of the fall out that came with working the homophobe dentist that they used to work for – and surprisingly this has spread to encroach their personal lives/backgrounds. To be perfectly honest, although I liked the introduction of a new character (an elderly gent and all around nice fellow), I found this storyline dragging on a but of a turn off.

While, over all, I found the story enjoyable and glad to see the guys are just as awesome together as they were in the first book, I was turned off a bit by the melodrama that seemed to pop around every corner.