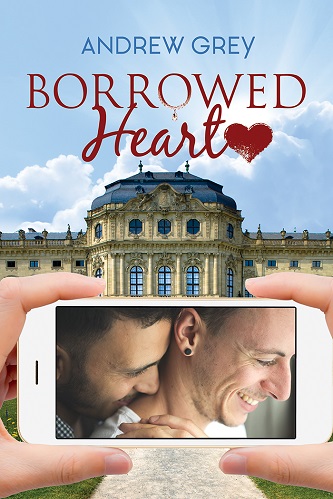 Blurb: Robin, the recipient of a brand-new heart, knows he can’t give it to just anyone….
Robin’s been through his share of upsets recently, from heart transplant surgery to a brutal breakup. But his experiences have taught him life is short, and he’s ready to seize the day and start anew. A job at Euro Pride Tours is just the kind of adventure he’s looking for. He gets to see the world and live a little, but love isn’t on his radar screen. He isn’t sure his heart can endure that again.

Johan might’ve disappointed his family by striking out on his own, but when he meets Robin, he has no intention of letting him down. Each man is just what the other needs to feel whole again, and while Johan might not be the man Robin originally thought he was, he’s exactly what the doctor ordered to make Robin’s borrowed heart beat faster. As the tour through Germany progresses, they grow closer, but when Robin’s ex joins the tour, he could bring their blossoming love to a dramatic halt.

Review: I love reading anything by Andrew Grey and he probably shares my absolute top spot of authors I will automatically read. I love the heart and emotions that are central to each story and getting to know the characters as they develop throughout their stories. There is something infinitely pleasing in knowing I can expect wonderful, relatable characters consistently from one fantastic author.

Admittedly, I’ve given Borrowed Hearts a lower rating than I do many of Grey’s books I’ve reviewed, considering he is author I usually give 4 or 5 star reviews. However, that isn’t to say I’ve done this because the story is not good or not relatable. I thoroughly loved the story, the themes and the personal challenges faced by the characters. Ultimately, the rating was because despite this, I never thought that I properly connected with the MCs, especially the German MC, Johan. I also thought that the storyline concerning the American MC’s, Robin’s, ex was a little rushed.

The story is about Robin, who six years previous, was the recipient of a heart transplant as his own rapidly failed. However, in the previous year, he has also had to come to terms with a boyfriend who didn’t love, was not faithful to him and saw Robin as an object of pity. All in all, a general bastard who Robin needed to deal with emotionally before giving his heart to another man. That other man being Johan. They meet in Germany, where Robin has moved as a tour guide for a travel company that specialises in gay European tours. With German ancestry, Robin feels a great connection to the country and in trying to get his life together, decides that Germany is the place to be. Johan is assigned to Robin’s tour as the bus driver, they’ve worked together previously but nothing really happened of note then. But now Robin is ready, and Johan has to show that he will never forsake Robin because Robin is on borrowed time with borrowed heart.

One thing that I found particularly interesting of the story was the fact that Grey tackled a character who has gone through an organ transplant. Generally, Grey features characters who have gone through cancer, their children have cancer, or are visually or hearing impaired. The whole idea of a character who is an organ donation recipient is novel for me, but I think that it’s an important one because unless you go through it or know someone who has, these are not thoughts or feelings that we normal dwell. And I thinking that is what makes this story most interesting.

One thought on “Borrowed Heart by Andrew Grey”