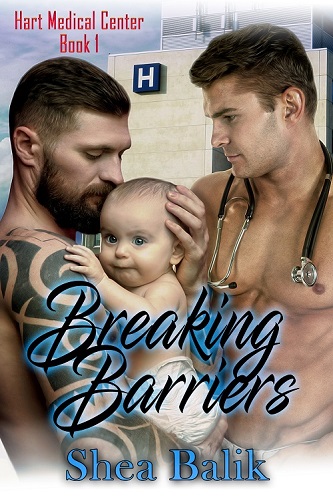 Blurb: Detective Jamal Tuma was used to life not going his way. As an omega in an alpha dominated world, he’d experienced more than his fair share of bigotry when he’d decided to enter the police force. His life had been put in danger more times than he could count for no other reason than alphas above him thought it wouldn’t matter if he’d died on the job. Yet, in the six years he’d been a cop, he’d never come quite so close to death as he did when an alpha doctor didn’t feel it necessary to treat his gunshot wound.

Review: From the moment Brace meets an omega with a gunshot to the abdomen he has been at the man’s side waiting for him to come out of his coma. The new patient coordinator, Shale is a blast as he doesn’t crap from anyone. This was a delightful story to read with colorful characters, a mysterious stalker and alphas who are bigots trying hard to stop the changes implemented at the hospital.

I loved how Jamal stood up for himself even against Brace. He’s as fierce as Shale when he is determined about something. Jamal and Brace were off the charts cute together. Even though we still don’t know who the stalker is I enjoyed the story. I really felt for omegas as some alphas see them as less than. It really angered me that some police and doctors who are sworn to protect and serve everyone shun them.

I am honestly intrigued with this series so far and am looking forward to getting to know the characters more as the series progresses.

One thought on “Breaking Barriers by Shea Balik”