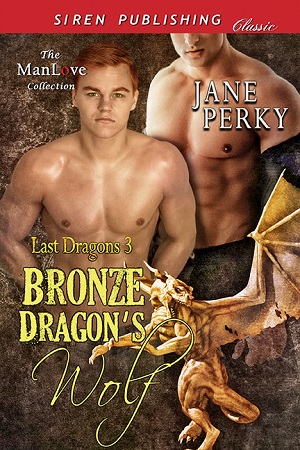 Blurb: An outcast in his own wolf pack, submissive werewolf James summons the courage to drive up to Draken Castle and see his best friend only to bump into sexy and lethal dragon shifter Zane Draken. The chemistry between James and Zane is insane, but James isn’t sure the bronze dragon is capable of commitment. James guards his heart for a reason, but will Zane only end up breaking it to pieces?

Seeing his two brothers happily mated, Zane Draken still believes a mate will only weigh him down until he meets one feisty little werewolf. Smart, bold, and adorable, James is everything he imagined in a mate, but James seems to believe a dragon can’t change his scales. When an external threat puts his mate in danger, Zane’s there to sweep in and prove once and for all that James is his to claim.

Review: Each book in the Last Dragons collection features a new romantic couple. To enjoy the overall story arc and crossover characters, I would recommend reading the series in sequential order.

James wanted his best friend back. They had been from the same wolf pack but when Ben left his life got even worse. He was bullied and well you get the picture. So when he went to see Ben he hadn’t expected a big bronze dragon sitting on his car. Turns out Zane is his mate, things might be looking up.

Short and sweet, well I wouldn’t exactly say sweet but still a nice story. It is a bit dull and boring but for such a short story it had a lot to tell. Quite a bit of different things were thrown in to make it seem a bit longer, excitement, adventure and a touch of danger added in with a bit of sexy time.

I can’t say that it would ever be one of my favorite type of stories but it is entertaining. It is pretty good for when your just wanting to take a break. Now I am off to read the next book in this series.