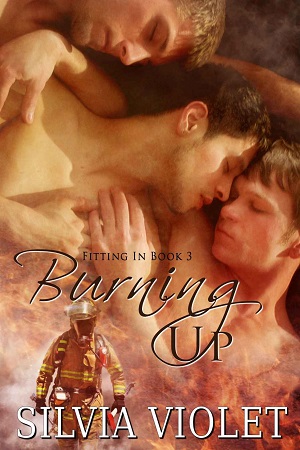 Blurb: Bryce has been a firefighter for ten years, but when a horrific house fire leaves him reeling, he moves to a new city, hoping to shove those memories behind him. As he adjusts to his new station, Bryce keeps to himself until Matt and Toby, two hot young men in his unit, throw temptation in his path. Bryce knows better than to mess around with men he works with, especially two newbies who are in the closet. But after a difficult day, Matt and Toby offer him compassion and friendship, which slips so easily into sex Bryce finds the combination irresistible.

Matt and Toby want to expand their relationship to include a third, and they’ve set their sights on their sexy bear of a lieutenant. Their first night together is a scorcher, and, more than that, it feels right, to all of them. But since Bryce refuses to hide who he is, and dating men on his shift is against the rules, all three men are going to have to make some tough choices if they want to stay together.

Review: I am seriously in love with the Fitting In series by Silvia Violet. Burning Up, however, is a bit of a departure from the previous two series which concentrated on three other men making their relationship work. For that reason this book works as a standalone if you want. Most importantly, though, you have three hot, gay fire fighters who seem to need little or no coercion to become a thruple.

The story follows established – and closeted couple – Matt and Toby, who are keen to add a third to their relationship. They need a dominant male, which means that there is some very light BDSM. That’s when we throw Bryce into the mix. He’s a bit older than Matt and Toby and has been a firefighter for ten years. After a horrific house-fire he picks up his life and ends up at the same station as Matt and Toby in an effort to get over the horrors in his life. However, Bryce also has a strict rule of not being in a relation with a co-worker and for damn good reasons.

This is hot and sexy. There are hot firefighters in dangerous situations and a good dose of sexual healing so that a trio of men who just fit together can get their HEA.