Hi guys! We have Liz Faraim stopping by today with the tour for her new release Canopy, we have a brilliant interview, a great excerpt and a fantastic $20 Amazon GC giveaway so check out the post and enter the giveaway! ❤️ ~Pixie~ 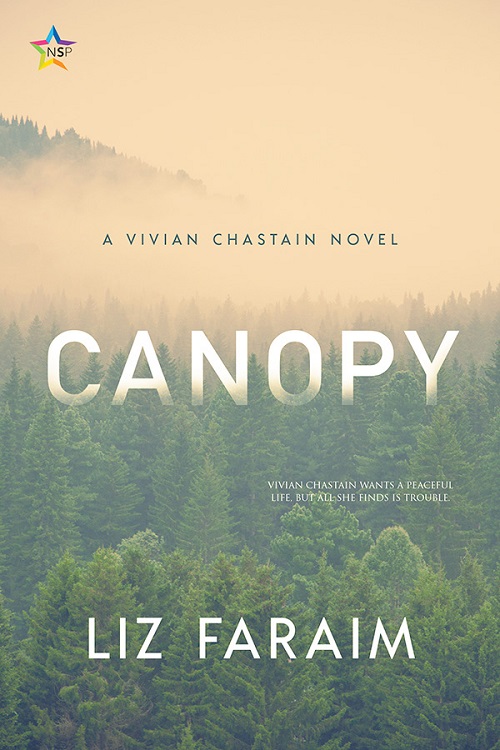 Vivian Chastain is an adrenaline addicted veteran, transitioning to civilian life in Sacramento, California. She settles into a new routine while she finishes up college and works as a bartender, covering up her intense anxiety with fake bravado and swagger. All Vivian wants is peace and quiet, but her whole trajectory changes when she stumbles upon a heinous crime in progress and has to fight for her life to get away.

While recovering from the fight, she falls in love with someone who is tall in stature but short on emotional intelligence, and this toxic union provides Vivian the relationship that she thinks she needs. Given Vivian’s insecurities and traumatic past, she clings to the relationship even while it destroys her.

Vivian’s relationships are strained to their breaking points as she continues to seek balance. She turns to her best friend for support, only to be left empty handed and alone until she finds comradery and care from the last person she would have thought. 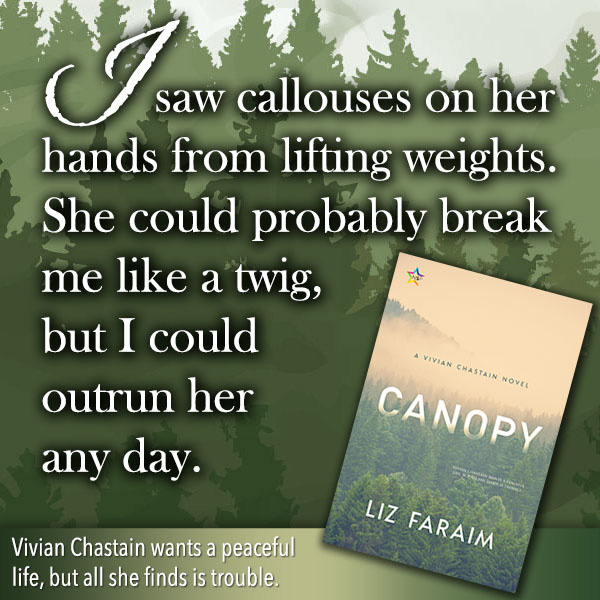 Do you ever base your characters on real people? If so, what are the pitfalls you’ve run into doing so?

Yes, I have based a few characters on real people. Some are loosely based on the real person, whether it be their appearance or personality, but they morph into their own character the more I write about them… well, except for one. The character named Bear is solidly based on my best friend, who also went by the name Bear. Bear passed away in 2017 from cancer, and I got permission from her wife to use Bear in my writing. Bear is the one person I have worked hard to stay true to who she was in real life. The only pitfall here has been how emotional I get when writing about her. I truly miss my dear friend, and conjuring her up when I write about her often brings me to tears.

How long do you write each day?

My daily writing time varies anywhere from zero to several hours. I have a busy life between solo parenting, chronic illness, and a full-time day job. Unfortunately, writing often gets pushed aside to the weekends, or the middle of the night when I have insomnia.

I used to get really down on myself when I wasn’t hitting my weekly word count goals. I am very analytical and deliberate in my thought, so I built an excel spreadsheet to track my daily, weekly, and monthly writing productivity. Using this spreadsheet has motivated to me write more, because seeing the numbers get bigger every day feels good.

How long on average does it take you to write a book?

Thanks to NaNoWriMo 2019, I finished one novel in two months. Otherwise, given all of my other responsibilities, it usually takes me about six months to finish writing a novel.

Who has been your favorite character to write and why?

My favorite character to write so far was Shelly Barstow. Shelly is a petty, vindictive person, which is the opposite of who I am. It was fun to put myself in her shoes and get really sneaky and mean.

What was the weirdest thing you had to Google for your story?

One of the weirdest things I have had to Google while writing was about how sepsis affects the body, and also how to put in and take out a nasogastric feeding tube. These both come into play in my next book, Stitches and Sepsis, which is due out in early 2021.

Let’s talk to your characters for a minute – what’s it like to work for such a demanding writer?

Liz is all right. I think we are a lot alike. She is thorough and thoughtful, but she really pushes my mind and body beyond its limits. If it were up to me, I’d like to spend less time depressed or fatigued from over exercising.

What’s your core motivation in this book?

My motivation with Canopy was to tell the story of a regular person who struggles with anxiety, setting firm boundaries, and relying on other people. I think Canopy does a good job of showing the reader that it’s okay to be human. Not every story has to have a happily ever after, and not every protagonist is a hero.

Are you happy with where your writer left you at the end? (don’t give us any spoilers).

Not really. Liz ended Canopy with me right in the middle of an argument with some random guy who had been stalking me. She did it on purpose, because Canopy is followed by another book, but she kinda left me hanging and angry.

In my free time (what’s that?) I like to beta read manuscripts for my friends. I also like to read contemporary fiction, historical fiction, mystery, and the occasional fantasy novel.

What qualities do you and your characters share? How much are you like them, or how different are they from you?

I relate the most with Vivian. We share a similar background and personality traits. Most of the motorcycle riding and hiking scenes come from my own experiences. Characters from Canopy who don’t share any qualities with me would be Ang, Sergeant Brickhouse, Crystal, and Kate. They are each their own unique self. I was most comfortable writing Vivian, but writing these other characters really forced me to step outside of myself and look at everything from different perspectives. 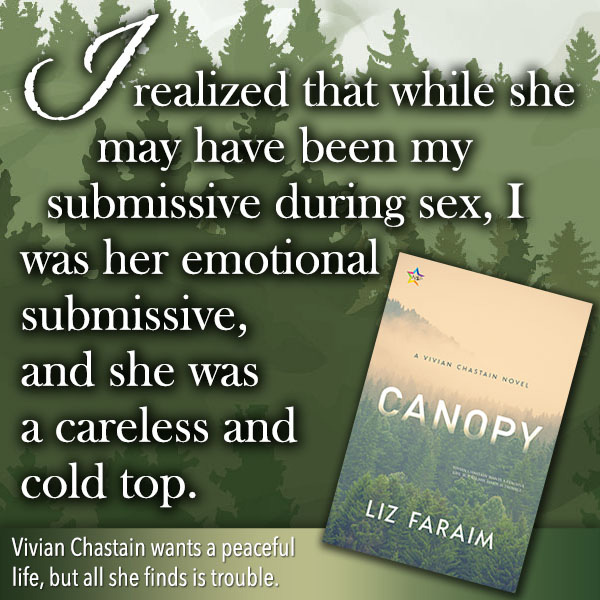 As I approached Road 27, I saw what looked like an old warehouse. It was all closed up, the metal siding rusty, the dirt lot empty and overgrown with Russian Thistle. It was perfect for a bio break.

I backed off the throttle and downshifted. The bike rapidly slowed under me. I pulled into the dirt lot and parked along the side of the structure. I killed the engine and hopped off quickly, yanking off my helmet and gloves.

My bladder was screaming for relief. I grabbed a tissue from my tank bag and jogged around to the east side of the building so I wouldn’t be seen from the road. Dropping trou, I squatted against the side of the building. The heat of the warm metal siding radiated through the back of my shirt. Once I was finished, I stood, buckling my belt as the relief washed over my body.

The building was surrounded by row crops, and a breeze blew across the fields. The distant Sierra Mountains wavered in the hot air.

It occurred to me an abandoned warehouse like that would be a great spot for geocaching and I walked slowly along the side of the building, looking for potential geocache hiding spots.

I rounded the far corner of the building and stopped in my tracks. I was startled to see a car parked about twenty feet away. It was a rusted-out old Honda Accord, its windows rolled down. The burgundy paint was oxidized, and strips of the headliner hung down, fluttering in the hot midday breeze.

Some faint shuffling sounds came from inside the warehouse, and I realized I was standing directly in front of a rusty pedestrian door. I took a few steps back. My hands tingled and I balled them into fists.

It’s just a farm worker getting some tools, dumbass.

But the hypervigilance that had kicked in would not go away. Something was off, and it made me bristle.

I reached down for my M16 sling and came up empty. I looked down at my boots on the dusty cracked ground. They were my scuffed-up riding boots, not military issue jump boots. My pants were denim, not BDU’s.

I slipped away to another hot, dusty day five years prior. A day when RPG’s and bullets filled the air rather than the sound of the breeze rustling crops. A day when blood was shed.

I took another step away from the building and forced myself to breathe. Breathe in the smell of freshly plowed soil, leather, gasoline, and the faint hint of a dung heap.

I slapped myself across the thighs, hard. Even through denim, the sound and sting of it helped bring me back. My thighs and palms burned. I did it again to make the point to myself.

The door to the warehouse opened, and a woman stepped out. She was wearing a tan backpack, whistling, and twirling a key ring on her fingertip as she walked toward a spigot near the door. Her long hair was brown and tightly permed. She was short but solid and moved like an athlete. Scanning her, I noticed that her hands and shirt were bloody. I coiled up inside, ready to fight.

The door closed heavily behind her, and she took a few more steps before looking up and spotting me. She stopped whistling as our eyes met.

I immediately shifted into a fighting stance. With no hesitation the woman charged at me. I got low and opened my arms because I didn’t have time to try a side slip. As soon as the woman plowed into me, I wrapped my arms tightly around her.

We went down hard. I wrapped my legs around her waist. Dust and grit were immediately in the air.

I had a hard time keeping a grip on her torso because of the backpack. I worked my arms up until the crook of my elbow was wrapped around the back of her neck, holding her as close as I could. She bucked and tried to roll out of my grip. I locked my right foot into the crook of my left knee and squeezed the woman’s guts. She grunted as I clamped my thighs down around her, restricting her ability to get a full breath. She was solid and strong, deep down in her core.

Adrenaline and rage surged through my body, and a clear lucidity took over. I was in my element, and apparently so was the woman I was hanging onto. 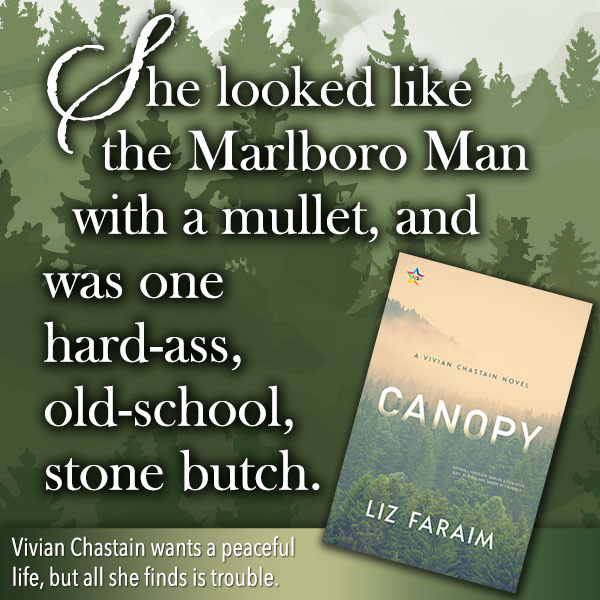 Liz Faraim is a recovering workaholic who has mastered multi-tasking, including balancing a day job, solo parenting, writing, and finding some semblance of a social life. In past lives she has been a soldier, a bartender, a shoe salesperson, an assistant museum curator, and even a driving instructor.

Liz writes contemporary fiction that highlights queer characters and often includes complex polyamorous relationships. Her writing has a hefty dose of soul searching and emotional turmoil while also taking the reader on fun adventures. She loves spending time in nature and does her best to share nature with her readers. 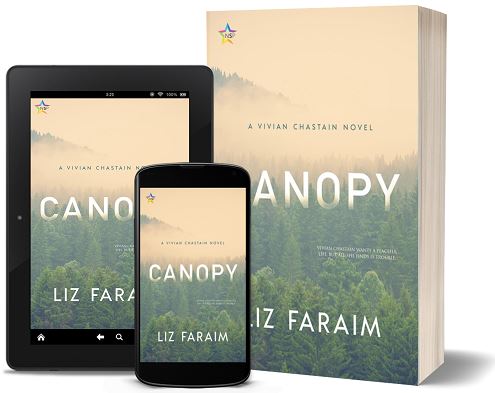 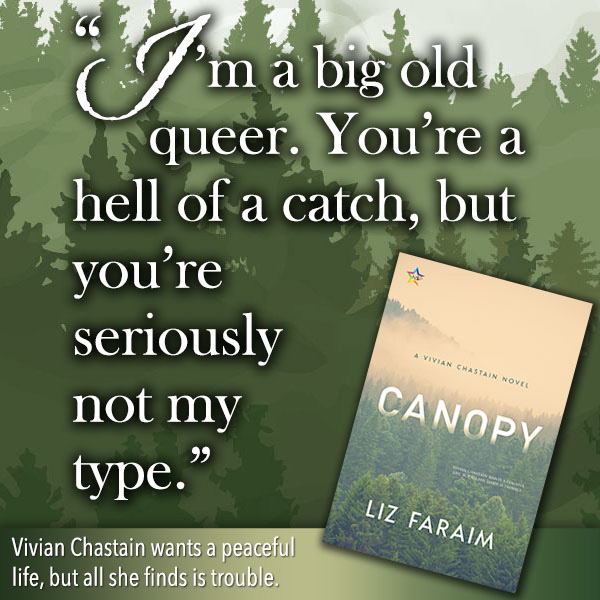