Hi guys! We have Ana Raine popping in today with her upcoming release Captive Wings, we have a great exclusive excerpt so check out the post and enjoy! ❤ ~Pixie~ 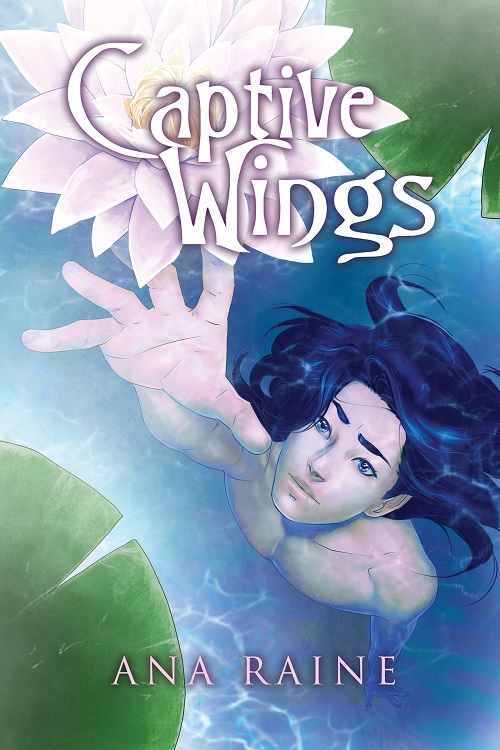 Liberation from one master might mean enslavement to another.

For centuries, the Kuro swan shifters have been the unwilling servants of the Dryma faeries. That changed when Prince Tristan of the Dryma attempted to sacrifice himself for Royal Kuro Kanji—his lover and mate.

The Sidhee, seeing Tristan’s actions to free the swans as a betrayal, launch a devastating attack that leaves most of the Kuro and Dryma dead or imprisoned. The fate of the swans rests entirely on Kanji’s shoulders, and he must somehow devise a plan that will protect both his partner and his tribe as the war with the Sidhee rages. It won’t be easy for mortal enemies to become allies, and Kanji is beginning to despair of ever waking Tristan from his deathlike slumber. And neither the Kuro nor the Dryma can compete with the Sidhee when it comes to brutal violence.

When Kanji finds a small boy asleep at the bottom of a lake, his hope for reuniting with Tristan is rekindled. But what is the boy, and can his magic turn the tide against a seemingly unstoppable enemy?

If it were even possible, I was thinner than before the Sidhee attacks. I could already imagine what Tristan would say when he saw how malnourished I was. “Just a burger.”

Without another word, Shinji disappeared, almost forgetting his coat in the process.

The bathroom was too tiny to accommodate a mirror, so the only looking glass was hung above the sink in the kitchenette. I caught a glimpse of myself. I’d only been wearing a coat so I would be able to fly without ripping a shirt, so I could see the harsh outline of my shoulder blades and the definition of my spine. Tristan deserved more than a skeleton to hold when he woke up.

On second thought, I should’ve asked Shinji to bring me as much food as he could carry.

I vigorously washed my hands before brushing the curtain away and entering the dimly lit room where Tristan was sleeping. Originally, there had been a set of bunk beds in the corner, but Zain and Tomas had helped me move them to another cabin so every Kuro could have a place to sleep. All that remained was the queen bed pressed against the right wall and then an empty space on the left where I’d been keeping our clothes.

Even in his sleep, Tristan was an image from fairy tales. When humans imagined fairies, I knew he was what they were seeing. His long dark lashes rested on the top of his cheeks, his mouth slightly parted as he drew breath. His defined jaw was absent of facial hair, but he didn’t look like a child.

Only slightly taller than me, he had broader shoulders, and his hands could cover my chest effortlessly. But his most striking feature was his emerald eyes, a color I longed to see again.

I brushed his golden strands from his face and pressed my palm to his forehead. The cabin wasn’t meant for winter use, so the only source of heat was an old space heater we’d found.

Perched delicately on the small nightstand was Tristan’s flower, silently hovering above a small bowl of lake water taken from Pasky Nature Reserve. Despite my many efforts to adjust the flower’s position, Tristan refused to wake up.

When there was nothing waiting for him apart from me, I couldn’t really blame him.

But the anguish was enough to kill me.

“Please, please come back,” I begged quietly, resting my head on the stale sheets. The linen was cool to the touch but couldn’t compare to the icy fist wrapped around my heart.

His hand was heavy and limp on the top of my head, but at least it was something tangible. Ana Raine writes because she loves to believe in magic, dragons, and that there is more to life than what human eyes can see. Ana lives in Michigan where when it’s not snowy and wet, there are beautiful state parks and lakes to visit. When she was eighteen, she married her best friend and they live with their two cats, Mason and Misaki. Ana has celiac disease, but that hasn’t stopped her from learning how to cook and bake so she can eat tasty treats. Fudge, enchiladas, and anything involving yucca/cassava are her absolute favorite.

Ana has studied in Osaka, Japan where she learned about theater and drama. She would love to go back after she is sure her Japanese is efficient enough. Ana loves anything to do with foxes, especially Arctic foxes. One day, Ana will find a way to incorporate her love of foxes into a novel, but until then, she’ll stay focused on fairies, shape shifters, and mythology.

Feel free to stop by her blog for tasty recipes, freebies, and more.