Hi guys! We have Melissa E. Costa popping in today with the lovely cover to her upcoming release Cat Escort, we have a brilliant excerpt so check out the post and enjoy! ❤️ ~Pixie~ 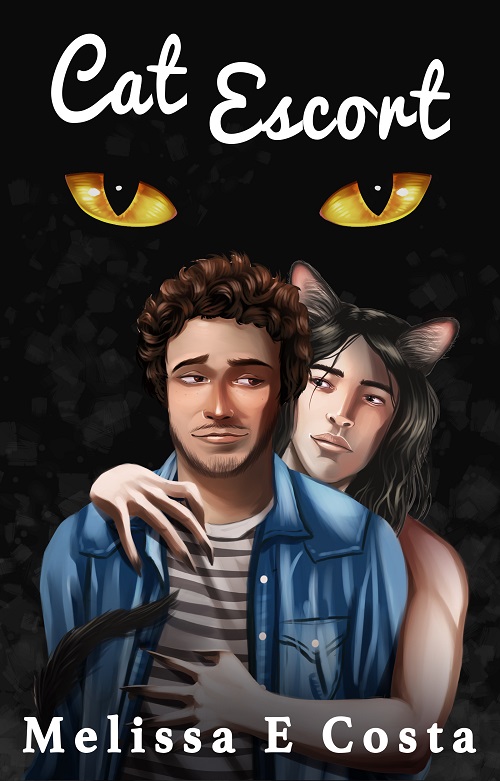 A night of passion with a Cat Shifter escort becomes everything for a man with poor self-esteem.

To mend his broken heart, Seth purchases a date with a Cat Shifter Escort. The sex was so amazing, it let him forget his pain. Seth never expected to see him again.

Nao couldn’t forget the client who’d cried in his arms, so destroyed from love gone wrong. He wanted nothing more than to help the beautiful, broken man.

Their night was supposed to be a one time thing, but six months later, everything changed when they met again.

Seth arrived at Nao’s high-rise and punched in the gate code. Nao should be home by 9:00 p.m. He normally didn’t run late, but Nao didn’t like the idea of Seth waiting outside for him, so he had given Seth the gate combo and a key to his place. Seth had already been over to Nao’s apartment several times, and this wasn’t the first time he had let himself in. He couldn’t believe Nao had given him a key. Did that make him special?

Nao never brought any clients home. Not one. He was still Nick to them. Seth had tried his best to stay away from that part of Nao’s life, but he couldn’t deny how jealous he got. He didn’t want anyone touching Nao.

The door flung open, and Nao dragged himself in. He sighed heavily and dropped his black purse onto the floor. Leaning against the wall, he tried to catch his breath. His sleeveless black dress made it just past his groin and clung tightly to his slender form. A slit down the front revealed his chest to his navel. Despite looking feminine, it looked amazing on him, like an incubus of the night. He stepped out of one black high-heel shoe before shaking the other one off, too.

Nao’s shoulders shook as he let out a sob. He sank down to the floor, and cried his heart out, his high-pitched mews sounded like a kitten.

“Oh shit, what happened?” Seth rushed to his side.

Nao’s eyes flew open. They pooled with water like a raging black sea. Golden flecks, caused by the hallway light, flickered within them. “Sorry, I forgot you were coming over tonight.”

“Yeah…you lent me a key, remember?”

“Gave it to you.” Nao wiped his eyes with the back of his arm.

“What happened?” This close, Nao smelled different. A strong aftershave marred his floral-lemon scent that Seth loved so much. This was another person’s smell—the client Nao had just slept with, the one who’d hurt him. Seth’s blood boiled. Anger coursed through him, and he wanted to find the asshole and skin him alive. How dare someone hurt Nao? All Seth could think about was the bitter scent on Nao that infected him like a virus.

Nao shook his head and got to his feet. “It’s not important.”

Over the time they’d known each other, while Nao was very open about a lot of things, he never complained about his problems or showed any fatigue. “Why do you do this?” Seth reached out and put a hand on Nao’s shoulder. “You don’t have to handle everything by yourself.”

Nao brushed him off again, but he wasn’t rude, his laugh brisk, and his steps more so. “Just a bad day, that’s all. Sometimes things are so good that I forget about the shitty side.”

“Humans.” Nao smiled. A few tears slid down his cheeks.

Seth’s temper rose by the second. “What did he do to you?”

“Nothing super terrible, really. Some days I’m more sensitive than others.”

“I still wanna go and kill ‘em.” The scent on Nao only served to fuel Seth’s anger. He never wanted to punch someone more in his life than he did at this moment.

Nao smiled. “‘Course you do.” Finally, he dropped his façade of strength and sank down on his couch. “It’s days like this that I have to remind myself of all of their good sides, else I’ll wanna run back to the cattery.”

“Gonna tell me what happened?” Seth sat down by Nao’s side.

Nao shook his head. “Honestly, I’d rather not even talk about it at this point. Which is a stupid thing to do ‘cause it’s gonna make you think I was raped or something terrible, and in the scope of things, it wasn’t.”

Seth flinched at the word rape.

“I wasn’t.” Nao rolled up the dress until he could slip out of it, then sent it flying somewhere on the impeccably clean floor. His messy behavior must’ve meant his day was more stressful than he let on. It was another example of Nao wanting to hide his vulnerabilities.

Seth swallowed at the sight of Nao’s bare chest—firm muscles over smooth, soft skin. His hip bones were defined, and his abs were shaped perfectly. It was like staring at a masterpiece.

Nao’s dark eyes found his. “Sometimes it gets painful, that’s all.”

“Painful? Did he make you do something you didn’t want to?”

Nao shook his head. “Then I’d be much worse than I am now. Just forget it. I’ll tell you when I’m not so tired. Speaking of which, can I borrow your lap?”

“Lap. I’m exhausted.” Nao lay down on the couch, and Seth had a perfect view of his shapely ass, covered by silky black panties that rode up his cheeks like a bikini bottom.

Even Nao’s hair smelled like that asshole. Seth tried to breathe through his anger and jealousy. Nao needed him. He couldn’t give in to these feelings. Slowly, he petted his hair.

“Hmmm, that feels good. I might…” Nao nuzzled into Seth’s thigh. “Do you mind?”

At Nao’s gentle words, Seth’s anger dissipated. He didn’t know what Nao was asking, but he wasn’t about to tell him no. He shook his head.

Nao’s transformation started slowly. His ears became cat ears, and he spouted a tail. Then fur covered his body so fast that Seth didn’t make out the change from human to cat. Next thing he knew, Nao’s panties pooled on the couch, empty. Nao, the black kitty, climbed into his lap and nuzzled his knee before he curled up and fell asleep.

Seth sat perfectly still, shocked, and a tad scared—mostly awed by Nao’s trust in him. The world treated werecats with suspicion or hostility. As such, they didn’t revert to cat form much. Nao said it left them too vulnerable. Did that mean Nao felt comfortable around him? He had a key to Nao’s place. Wasn’t that enough to quell Seth’s uncertainty?

Gingerly, he stroked Nao’s back, petting the soft fur. Then he rubbed behind Nao’s ears.

It started out low, but soon Nao was purring.

He loved Nao. He wanted to free Nao from this life. To forever protect him. To never allow a customer to hurt him again.

This was the first time he’d seen Nao cry. What had that asshole done to him? If it wasn’t so bad, as Nao claimed, why did he breakdown the moment he got home?

Seth curled his lip and balled his fist not petting Nao. Most likely, that client wouldn’t suffer any consequences for his actions. Nao couldn’t go to the cops. Never thought I’d think this, but if prostitution was legal, Nao could at least seek help.

Werecats can’t actually go to the cops. Nao had said that. If that was true, then did they have any justice? That’s right. Panthers. Nao could go to Papa to report this client. Then the man would get some punishment. Of course, with the way Nao underplayed the incident, most likely, he wouldn’t say anything.

And yet, regardless that he had hurt Nao, that client still got to have sex with him. That last thought struck Seth hard.

Other than once, when he’d been drugged, Nao never tried a move on him. Even that kiss on the beach had been initiated by Seth, not Nao. Maybe that wasn’t Nao’s end goal? That was saddening. Nao would sleep with strangers, but he wouldn’t sleep with him.

Was it because he wasn’t paying? Having Nao as a friend should’ve been combatting Seth’s self-defeating thoughts about the world not liking him, and never feeling wanted. It did some of the time, but not right now. Were they not having sex because Seth wasn’t paying, or was Nao simply not attracted to him? Neither of those helped his self-esteem. Their one night together must’ve been all an act for money, because they had so many chances to have sex, and yet Nao never took them.

Not like Seth took them either. But when he had on the beach, Nao had reciprocated…

Still, he didn’t want to encroach upon Nao’s space. Everyone else did, and Seth wanted to be better than that. He also wanted to devour Nao’s lips with deep kisses, and explore the caverns of his mouth. They had kissed on the beach. What had that meant? If their ice-creams hadn’t been a problem, would they have taken it to another level? Nao had kissed back. Maybe he did desire him? And not just when he was drunk.

He should probably talk to Nao about their kiss, but he was afraid. What if Nao flat out turned him down? Or worst yet, what if Nao only kissed him out of pity?

Seth felt so confused, and his mind wasn’t helping at all. Instead, Nao’s heat had him remembering their night together when he’d been a client. The soft feel of Nao’s insides. The way he moaned when Seth had entered him. How Nao had completely surrendered and took perfect control. Seth had never felt more alive. Nao awoke his senses. Fucked his brains out, for lack of a cruder expression, but as with everything involving his beautiful friend, Nao was complicated. Perfect and complicated.

If not for Nao’s cat form, Seth would have lost the battle and kissed him. Melissa writes character-driven fiction, and any genre is fair game! When she’s not writing, she enjoys reading, anime, manga and gaming. Living by the motto of trying all things twice, Melissa has jumped out of a perfectly good plane, swam with manatees, dove head first into Alice’s rabbit hole, and seduced classy ladies in 6-inch heels. A free-spirited bohemian, she currently lives in artsy St. Petersburg, Florida with her soulmate and their two, adorably needy cats.