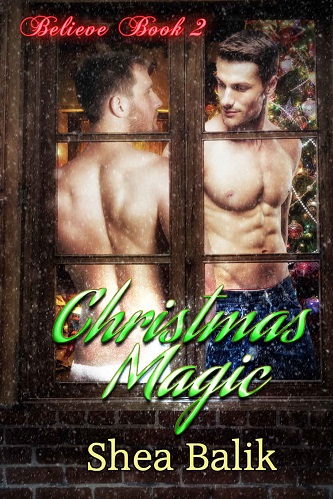 Blurb: Do you believe in the magic of Christmas? Tim Richards didn’t, so why had he thought he could make a Christmas wish and have it come true?

Much to his surprise, he met the man of his dreams when Nick Snow walked into his world and turned it upside down. The life he had always hated was becoming something from a dream and more than anything he could have ever possibly imagined. For Tim, to believe childhood fantasies could come true, was impossible.

Nick Snow tended to only think about work. That was, until he met Tim. He’d never imagined anyone would ever come between him and his career. Now he knew that there was so much more to life than a job.

Can Nick show Tim that Christmas Magic is real?

Warning: This book contains frivolity, laughter, and a lot of sex. Nothing is off the table when these two figure out if their reality is nothing more than fantasy, or if their fantasies can become reality, with faith in a little Christmas Magic..

Review: Tim’s life consists of working several jobs to make ends meet. He wishes for something better in his life but thinks it won’t happen. When he meets Nick his life takes a turn he never dreamed would be possible.

Nick is sweet and attentive as he learns about Tim’s life or lack there of. He has all the confidence that Tim will succeed when he gets a new job at a toy store. Along with that Nick dazzles him with things Tim never experienced as a child.

I loved everything about this story. It was heart warming to see so much happiness brought Tim’s way after all he had endured. Fantastic read.