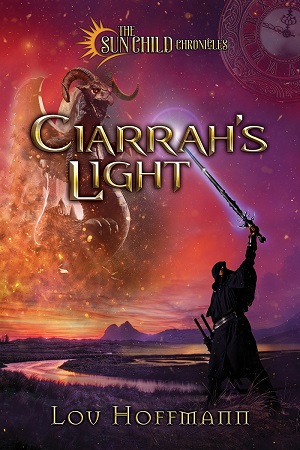 Luccan, future Suth Chiell of the Ethran Sunlands, also known as Lucky, has reached the end of a months-long adventure and gained much. Now he wants nothing more than to relax and recover at home. His mother’s apparition has other ideas, and dark dreams drag Lucky further and further into unconsciousness until he’s nearly dead. With help from Lucky’s sentient obsidian blade, Ciarrah, he makes it back to the light, only to find his country is in deep distress, and it’s getting deeper.

The wizard Thurlock, Lucky’s dragon-kin uncle Han, and other friends help him muddle through as he becomes the channel for prophecy. War erupts in the Sunlands, and in a battle against wraiths created by the advanced science of a dying world, Lucky plays a key role. Physical weapons can’t stop the enemy, but Ciarrah’s light can, and only Lucky can wield it. With the help of his winged horse, his boyfriend, and Thurlock, Lucky sets out to prevent his mother’s shade from wreaking any more havoc. But will stopping her end the horrors facing his world?

Review: Lucky has plans for a long break after his adventure but things do not go as planned and he is yet again pulled into another demanding adventure. Prophecy, battle plans and war quickly ensconce our brave Lucky into an unforgiving adventure with much at stake.

I loved everything about this story. It’s breathless scenes left me stunned at times. The battle plans were ingenious as well as the characters themselves all playing vital roles into bringing this stunning story into sharp clarity.

I was hooked from the very first word to the last in this exciting addition to the series. Another brilliant story for the Sun Child Chronicles as we follow Lucky on his journey yet again.

One thought on “Ciarrah’s Light by Lou Hoffmann”