Hiya guys! We have Nell Iris popping by today with the tour for her new release Cinnamon Eyes, we have a great excerpt, a brilliant giveaway and my review so check out the post and click that giveaway link! <3 ~Pixie~ 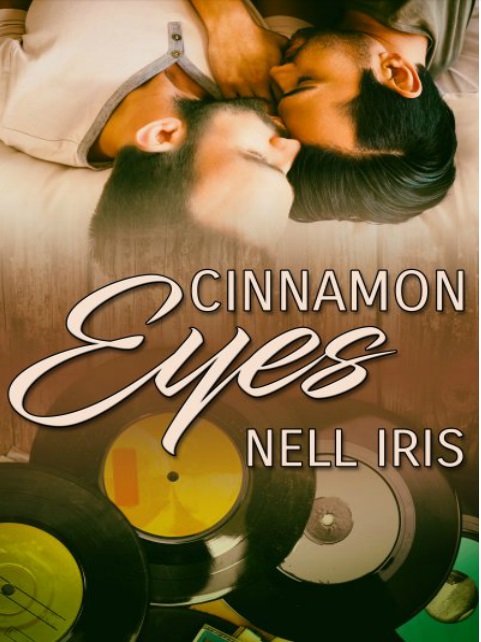 Cory’s had a rough year struggling with severe depression. He’s desperate to rebuild his shattered life and break away from his demanding family. When his therapist encourages him to do something for himself, he knows exactly what he needs. I want to see Asher again. The best friend Corey ever had who, at fifteen, held Cory’s heart in his hands without knowing it.

Asher’s had a troubled relationship with his father since he came out. Now that Pops is sick, he’s fighting for his right to help or even find out about his father’s health. Then there’s the complication of an ex-boyfriend unwilling to let go.

When Cory and Asher meet again after sixteen years, Cory’s feelings are as strong as ever. But does Asher feel the same?

When the song ended, I opened my eyes and clapped with the others. He didn’t look up or say anything, just started strumming another slow song on the strings. Judging by the cheers from the room, it was a popular one.

And then he lifted his head, opened his eyes, and started singing.

It was him. Asher.

Both my hands flew to my face and covered my mouth.

Sixteen years later and I still would have recognized him anywhere. The hair was as unruly as ever, and just as rock ‘n’ roll as his voice. The jawline so sharp he could probably cut glass with it. And the nose was still a little too big for his face.

I couldn’t see his green eyes from here, but I remembered them vividly. The pale color of a leaf newly broken out of its bud in spring, was such a stark contrast to his black eyelashes and olive complexion and had always hypnotized me with their beauty.

When he started singing, his voice pulled me out of my initial shock.

The words struck a chord inside me. They reminded me of our friendship, all the way down to the scraped knees. Had he written this song? Had our friendship inspired him?

Then one day
he shimmered with a different light
Just one look at him
made my heart ache, stutter and want
I felt the same
pouring from his soul
A longing for more between us
The boy with loving cinnamon eyes
And I

He sang with such emotion, and the pronouns he used didn’t escape me. Asher was singing to a man, and my stomach made a hopeful jump.

I swallowed. I didn’t understand. That sounded just like … I shut down that thought immediately. It couldn’t be.

After the last chord rang out, the bar was deadly silent for a heartbeat, and then everyone started cheering and clapping and whistling.

I folded my arms on the table in front of me and collapsed with my forehead on top of them and my face hidden in the dark space between.

Had I heard what I thought I’d just heard?

Was that song … about us?

Had he had feelings for me too, back then?

The thought made me shake, and I grabbed my elbows and squeezed to keep myself from flying apart. I took a deep breath and didn’t let it out until my lungs screamed and burned in protest. I repeated the process several times until my teeth had stopped chattering and my heart had slowed its furious pace.

I was still hiding when someone cleared their throat in my vicinity.

“Excuse me? Benji said you wanted to talk to me? Are, uh, are you all right?”

His voice was as deep when he spoke as when he sang, and it sent a shiver down my spine, completely different from the previous desperate shaking. I took a deep breath and raised my head. Forcing myself to face him.

At first, he didn’t seem to recognize me. He searched my face for clues, but it only took a few moments for the spark of realization to light up his eyes.

“Cory?” His voice was gravellier than ever. “Cory, is that you?” Nell Iris is a romantic at heart who believes everyone deserves a happy ending. She’s a bona fide bookworm (learned to read long before she started school), wouldn’t dream of going anywhere without something to read (not even the ladies room), loves music (and singing along but let’s face it, she’s not Celine Dion), and is a real Star Trek nerd (Make it so). She loves words, poetry, wine, and Sudoku, and absolutely adores elephants!

Nell believes passionately in equality for all regardless of race, gender or sexuality, and wants to make the world a better, less hateful, place.

Nell is a 40-something bisexual Swedish woman, married to the love of her life, and a proud mama of a grown daughter. She left the Scandinavian cold and darkness for warmer and sunnier Malaysia a few years ago, where she spends her days writing, surfing the Internet, enjoying the heat, and eating good food. One day she decided to chase her life long dream of being a writer, sat down in front of her laptop, and wrote a story about two men falling in love. Blurb: Cory’s had a rough year struggling with severe depression. He’s desperate to rebuild his shattered life and break away from his demanding family. When his therapist encourages him to do something for himself, he knows exactly what he needs. I want to see Asher again. The best friend Corey ever had who, at fifteen, held Cory’s heart in his hands without knowing it.

Asher’s had a troubled relationship with his father since he came out. Now that Pops is sick, he’s fighting for his right to help or even find out about his father’s health. Then there’s the complication of an ex-boyfriend unwilling to let go.

When Cory and Asher meet again after sixteen years, Cory’s feelings are as strong as ever. But does Asher feel the same?

Review: After living the life his family wants him to Cory has reached rock bottom, struggling with severe depression Cory decides to follow his therapist’s advice and looks for the best friend he’d left behind sixteen years before. Asher is worried about his father’s health but the old man refuses to have much to do with him since he came out to him. Asher’s surprised when Cory walks back into his life and the easy friendship the pair had years ago falls back into place, but with something more between them.

This is a wonderful sweet story that is an easy and enjoyable read. Cory is a wonderful character who has been worn down by the demands of his family and a job he hates, pulling himself out of the deep depression has been hard for him but the one thing that sticks with him is the happiness he once felt when he had him best friend by his side. Returning to that boy has Cory once again glimpsing happiness and he finds a backbone to finally get his family off his back.

Asher is an incredible man who has fought hard to stay in his father’s life, with his dad sick he does what he can but he feels the distain and hate with every gruff word uttered by the man. Asher finds happiness with Cory and he also finds so much more when Cory refuses to let Asher’s dad chase him off.

I really enjoyed this story, Cory and Asher make a wonderful couple, their romance is sweet and their support for each other is fantastic. They are both there for the other as they deal with their families, and while one is a lost cause the other gives Cory and Asher hope.

There are some moments of tension in the story with Asher’s ex-boyfriend providing one moment, Asher’s dad one or two more and Cory’s family… well let’s just say they should be dumped in the ocean because I doubt that a bigger bunch of control freaks and snobs who couldn’t give a damn about what their son and grandson wants exists.

I recommend this story to those who love fantastic characters reconnecting and discovering love, who adore stories of overcoming limitations and moving forward, who love sweet romances with a dash of sexy, and who love men who refuse to turn their backs on a challenge and face it head on.