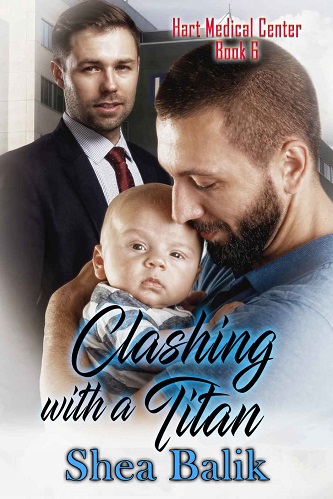 Title: Clashing With a Titan

Blurb: Dr. Oliver Pierce always thought Omegas weren’t worth his time. He’d even fought hospital management to keep Omegas from working there. But what if he was wrong? It was something he’d never imagined possible. That was, until he met Anson.

Anson Shaw had barely managed to get free from his ex-husband alive. After months of therapy he’d decided it wasn’t worth being under the thumb of an Alpha. But then he met Oliver. Everyone told Anson to stay away from him, yet despite their warnings he found himself being drawn to the Alpha.

Can an Alpha really change? Is it possible for an Omega to stand up to an Alpha and demand respect? When the Hart’s Medical Center stalker comes after Anson, both men search their hearts to find if love is worth the risk.

Warning: Triggers possible for shooting as well as gruesome notes left for the stalker’s victims..

Review: I admit I could not stand Oliver throughout the series for the way he felt about omegas. But once he met Anson everything changed for him. The stalker is scary crazy as he or she attacked Anson. I loved how everyone rallied around Anson and helped. Oliver telling Kelby off in a way had me shouting for joy as I can not stand her.

Oliver comes a long way from his thinking omegas are beneath him. But the two highlight for me were when Anson marches into the chief of police’s office to inform him of what he thought about his lead of detectives ignoring a stalker, which helped the chief realize the bigotry going on under his nose. The second was the hilarious incident when Anson was on bedrest and farting scene.